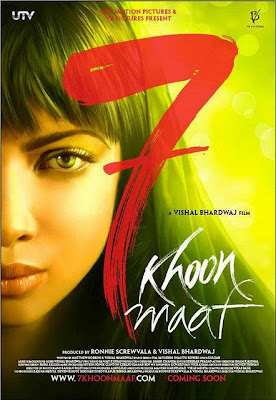 I had NO expectation whatsoever, because even though I like Priyanka, I wouldn´t call myself a fan, and even though I liked the little bits of the story I´ve heard, I wasn´t sure if it would be good enough - and to be frank I did not like the trailer at all. If anything, I found the movie interesting. From psychological point of view it is an excellent piece of work. Presented in flashbacks, a story of Susanna slowly unfolds in front of us. A young woman, who never loved anyone more then her father (as her mother died too early), just lost her support in life. And with her father´s death she is beginning to look for that one man, who will give her the same amount of love, caring and security. But it is obviously way too much to ask for and Susanna, with every new step she takes on her journey looses her original naivity, innocence and illusions.
From everything – the trailers, promo pictures and even the title itself you can be pretty sure what is the film about. Susanna, in her search for love, kills all her husbands, in one way or another. But still, even though you know that she´ll kill them all, you are always eager to know why? They are all very different guys. They have qualities others admire. But they also have some major flaws. And every time Susanna marries, you already wonder just what is wrong with the new guy because there just HAS TO be something....). Equally interesting it is to watch her getting rid of them one by one. Priyanka may be the only performer after Shahrukh Khan that you will feel sorry for even though she´s a mass killer. The scenes were not exactly graphic, but just knowing what is going on in the frame could make you sick (I sure did feel sick several times).

I was somehow confused at first since it is supposed to be 7 murders, but I could only count 6 of them. There are two options, which in my opinion might explain the seventh murder. One theory is that Susanna symbolically killed herself with entering into the order in the end, or that she just as symbolically killed the Christ with her previous sins. If you are familiar with Christianity, I´m sure you´ll understand what I mean. The second theory is much more simple: Susanna felt responsible for the death of her maid and counted that one as one more murder. Or am I really missing something and all this thinking is wrong?
The story unfolds very naturally, and all the flashbacks are very seamlessly thrown in. As I have mentioned the plot is predictable, but there is still no shortage of surprises, and the ending is brilliant. Only the scene with Susanna having a "vision" was a bit awkward, I would have preferred for her to actually be alone in the room, maybe with some light effects or something...... This was way too much in-your-face and it somehow didn´t have any magic or excitement to it. Still there are not many negatives I can think of right now. What made it were especially the performances.

It is more then safe to claim the film wouldn´t be half as good if it wasn´t for Priyanka. This is her film through and through. In fact she made it so much hers I cannot really picture any other actress in the role. She was perfect. She managed to portray a very complex and atypical character, who – in addition – leads you through her whole life. From naive and innocent Suzie she effortlessly becomes Sultana or Anna, always willing to sacrifice her identity in the name of love. She gets tougher and tougher with each wrong step she takes, and it costs her dearly. Energy and vivaciousness are vaining, until she becomes a wreck. And from there she again manages to rise – and do the most sensible decision of her life. She is not somebody you would hate, and puts you into a strange position with her ability to make you sympathize with her despite all those things you know are just wrong. But in the end of the day you cannot help but feel her insecurity, which results into trusting easily and not minding changing the religion. With Susanna, who is a bit Christian, bit Hindu, bit Muslim and bit who knows what else, you get a clear message: God is Love, no matter how you call Him. I was also glad that even though Priyanka was presented beautifully and sexy, there wasn´t anything vulgar about her portrayal.
Though they all had a limited screen space, the husbands manage to hold their own. The weakest is John Abraham, but that doesn´t come exactly as a surprise. Mr. Shah was my favourite, but I might be a little biased in his favour (cause I simply love him!). Irrfan Khan too does a brilliant job, and Russian actor Aleksander Dyachenko too makes a strong impact. The supporting cast too does a good job. I must admit that Susanna´s three faithful servants could scare the heck out of the Addams family any day. The newcomer Vivaan Shah looks very promising and it was very pleasant to see Konkona Sen Sharma in her cameo, even if for several minutes.

Technically the film isn´t the best. Music doesn´t leave any mark with the sole exception of „Darling“, which is a note by note rip off of a popular Russian folk song Kalinka (at least the makers did not try to act as if it was theirs, as it is pretty common in Bollywood).

7 Khoon Maaf doesn´t exactly deliver when it comes to emotions and connecting with the audience, there is no message either. For me it was a fascinating psychological trip into a soul of a woman desperately searching for love. It is a dark film, not fit for you if you get easily depressed.
Posted by Gaja Gamini at 10:34