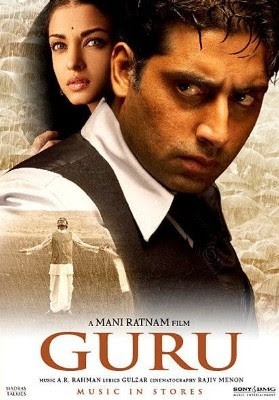 It might have been the setting, the overall look of the film, which was visually very pleasing, it might have been a really good music - and it was definitely the great work of all the actors involved, that earned this movie such a high mark from me. I generally love films set in the past, and for whatever reason they are rather rare in Bollywood, which is only a reason more why to appreciate Guru.

The film opens in the year 1951 in a small Gujarat village, where young boy has both big dreams and strict unsupportive father. Gurukant (or Guru) because of that practically runs away from home, absolutely determined to make it big no matter what, and because he does not lack common sense, he enters the spice trade business in Turkey, learns everything there is to learn about making money and at that point he decides he´s worked enough for others and the time has come to work for himself. But big dreams cost a lot and upon his return to India Guru does not have financial resources to start his own business.
He decides to take the quickest and most popular way to enrich himself – he gets married. He does not care at all if the girl in question does not like him, if she has tried to runaway with somebody else, if she is older to him, or even if she is ugly – and except for the last bit all those things are true. An so drop-dead gorgeous Sujata is married off to Guru, and in spite of not all that romantic beginning their relationship grows stronger with time, until by the end it is really the only stable thing in Guru´s life...
Anyway – finally Guru has enough money, and because he´s bold, daring and not ashamed of not-that-completely-legal ways either, his business soon starts to progress. And it grows bigger. And bigger.... Enjoying popularity among thousands of people he provides with jobs, Guru ruthlessly pursues success. Bribing people and smuggling parts for polyester mills and other machines that fill his factories is a daily bread for him. But all this success is also a source of a serious rift that is created between Guru and Manik Dasgupta – aging but still ass-kicking Mithun Chakraborthy in a role worthy of his talent and once legendary status – a mighty newspaper publisher, who for years acted like a father figure to him, because „nanaji“ does not approve of Guru´s illegal means. His untiring attempts to reveal Guru´s illegal actions give me a reason for immense happiness, because that is where Madhavan (Madhavaaaaaaaaannnnn.... oooooooohhhhhhhh.........my teddy bear.... my chweeeeeeeeeett chweeeeeeett teddy..... that dusky colouring and those eyeeeeeeeeeeesssssssss..... I love youuuuuuuuuuuuuuuuuuuuu) comes into the picture, even if for a limited time....
Abhishek Bachchan is astoundingly good as Guru, with all the changes that happen through the progress of time in the movie – from witty and stubborn youngster, through manipulative and arrogant businessman to ultimately depressed and helpless patient, he convinces the viewer completely. The film is his, and he proves that he is a very good actor. I believe a lot of him not being a saleable actor come from the lack of x-factor then acting skills, and many people also don´t take him seriously because of his father´s larger than life persona he, sadly and unfairly, has to compete with. At the same time Abshishek has given a fair share of bad and „lazy“ performances, and nobody will convince me he is not getting the lead roles still because of his family name and connections.
The role of Guru is meaty, there is a lot to work with, but somehow it wouldn´t be completely without supporting characters, that help to shape the image of the hero throughout the story. Already I have mentioned Sujata – Aishwarya, looking splendidly gorgeous (which, let´s face it, is the first thing that comes to your mind when she appears) and giving a great performance herself. Both those facts are reasons why I was a bit disappointed by the amount of screen-time she was given, in fact she hardly has had any role in the second half. Not fair, really.
I have already mentioned that Mithun Chakraborthy has not lost anything from his charisma or acting skill, and I was actually surprised how happy I was to see him on the screen. Madhavan, my teddy bear, was excellent as always. There is something incredibly likeable about him. And he is good. Period. His pairing with Vidya Balan (as Mithun´s grand-daughter slowly dying of multiple sclerosis), is very pleasant and his love for her incredibly touching. Their storyline gave the film a gentle feel and romantic touch, that somehow was amiss from Guru´s own relationship with his wife (where there was love, caring, devotion, but not much of a „romantic romance“).
The atmosphere, the overall look and music, everything is done with much apparent care and together with performances and very human story creates an interesting collage, which at time, I admit is on the verge of boredom, but ultimately works.
Posted by Gaja Gamini at 20:42