One of the absolutely weakest films of 2010. Let´s face it: Imran Khan is a sweet boy but an average actor and Sonam Kapoor is a pretty girl and a below average actress. The best thing about IHLS was ironically their pairing, since both are visually perfect for chocolate teenage crushes and given their limited acting skills they do not overshadow one another. As a directorial debut of Punit Malhotra the film is not bad, cinematography is excellent and music pleasant. Unfortunatelly the story itself is terribly weak and clichéd. At the very beggining J (Imran Khan) complains about the Bollywood films being all the same, starting with the hero not believing in love and ending with him being hopelessly infatuated (or better yet – married). A ironically this is the very plot of IHLS, without any inovative idea or even a bigger twist. From this point of view the movie can be described as pointless. It shows us that even a well tailored film can be a terrible bore. After few minutes I realized I´m only waiting for the moments when Imran´s fat friend appears on the screen in one of his absolutely amazing T-shirts.

Only little things saved Aisha before sinking even lower then IHLS. As a fan of Jane Austen´s books I was very much curious about how would Bollywood deal with her novel Emma. Well, not that well. The basic story stays the same, but there is nothing of its original charm. The blame rests with Sonam Kapoor. The only movie she has not managed to kill off so far has ben her debut Saawariya, and that only because Sanjay Bhansali has a magical ability to make even a wooden table act. Aisha stands and falls with Sonam´s performance, that is simply bad. She has no idea a thing like voice modulation exists, her expressions are non-existent, her screen-presence equals to zero. Her advantage is her beauty, but that can hardly save a film. Plus points of Aisha coudl have been capable Abhay Deol, good music, nice costumes and a beautifully fresh debutant Amrita Puri. But is Sonam Kapoor „acts“ in her father´s production project, everything is bound to be focused on Sonam, Sonam and Sonam. And so Abhay and pretty much everybody is unforgivably sidelined. Sonam Kapoor is a living proof that talent is not automatically inherited.

Story about a guy who travels to the past to change unpleasant present is not exactly original. The best movie ever based on this thought has to be the popular American series „Return to the future“, which for me personally is one of my favourites and most enjoyable movies I´ve seen. While „Return to the future“ has a very realistic touch (in spite of dealing with very much unrealistic theme), Action Replayy borders with fairytales. And the story develops in a similarly naive way. Either you have the feeling Kishen (Aditya Roy) is not doing anything, or he is doing some truly silly stuff (best example and the worst case being the singing contest). Visually the film is very colourful, sometimes so sugary colourful you might feel slightly sick. The best performance is by Aditya Roy. I have never been impressed with Akshay Kumar as an actor, and he did not convince me otherwise in this, but I guess we could describe hims as „good“. I was looking forward to see Aishwarya, however as „old“ I wanted to slap her and as „young“ she was annoyingly over the top. But still – you can forgive her a lot because she is simply beautiful to look at and is a great dancer. Average movie that doesn´t really give you anything.

How two self-murderers lived happily ever afer. When I was watching the film for the first time, I was a little schoked and a little excited, because you cannot také away from it that it is original and has many unexpected situations. But then I wanted to re-watch it and found out it lacks any serious repeat value. What bugged me throughout was the setting – what was the point of it all happening America. Change New York to Mumbai and it will not have any effect on the story whatsoever. Also some morbid joking may not be too easy to digest and one questions himself if the jokes have not passed the border of good taste already. Ranbir Kapoor is possibly my favourite actor out of the new lot and he does not disappoint. Priyanka was a darling when happy and silly, but the emotional scenes were not all that convincing, and some even looked too fake. But yeah, as somebody else has pointed out elsewhere, the film does show you she has the most stunning legs. The Ranbir/Priyanka jodi was new and refreshing, even though more they look like buddies and not lovers. The main hero of the film is the soundtrack.

Again I was a bit uncomfortable with most of the film taking place outside India, this time in Australia (btw shot in Mauritius) with no real reason. Again we are meeting Imran Khan, but in a much better film. Imran is an actor completely dependant on the script, direction and co-star. And to give him Deepika was a hit into the bull´s eye! Their chemistry is very natural, their interaction as well. Cute, uncomplicated story about what happens when your best friend (and boyfriend) starts to get on your nerves is pretty much comparable with I hate luv storys, because here too the level of predictability is fairly high, still it deserves a much better rating. Deepika was a pleasant surprise for me. I already liked her as both Shanti and Sandhya in Om Shanti Om, but she was a little lost beside Shahrukh Khan. From this point of view Imran compliments her greatly and gives her space to shine. And more – her Aaliya is nothing like the characters I´ve seen her playing before and to me it proved Deepika has a truly great potential and is versatile. She does not play herself over and over again like Sonam (no, I have no love for Sonam). As a lover of pre-2000 Bollywod I´m always happy to detect hints to older films, here it was for example Mr. India and Tezaab. 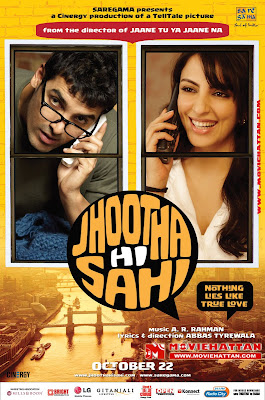 John Abraham is not my idol, but I find him a very likeable actor. With Jhootha Hi Sahi he shed off the "useless sex-symbol I do not find sexy" tag he had in my book previously. The film about a guy who by a printing mistake becomes a part of a help line for people on the verge of commiting suicide turns out to be a sweet romantic film, not exactly a comedy but still lighthearted and giving you several genuine laughs. The leading pair, which has a freash and cute vibe to it, is supported by a bunch of entertaining friends, every single one of them captured with all their chief characteristics even in not that big scope given to them individually. Jhootha Hi Sahi was another undeserved flop of 2010.

The last film I´m going to mention here came to the theaters only in December, but quickly became a hit. Deservingly. More then capable directorial venture of debutant Maneesh Sharma, great dialogues, excellent soundtrack and most of all powerful performances by Anushka and Ranveer – all that raises „BBB“ as the film is often called, to the best romcom of the last year. Though your intuition tells you how it is going to end, the way to the finish is completely unpredictable. It is really entertaining watching the two young people in their attempts to create a successful company with all the problems that might come along. Humour is always spot on and never over the top. Ranveer and Anushka create a very natural jodi, they look comfotable with each other. None of them has classical beauty, but their charisma substitutes for that and their talent is unquestionable. Anushka proves once again that she is possibly the best newcomer of the past decade. Ranveer as debutant deserves an honourable mention. The great plus of the film is the sense of reality, be it in the way the characters dress, talk or how Delhi is presented. On the top of all that the movie feels beautifully desi.
Posted by Gaja Gamini at 17:49