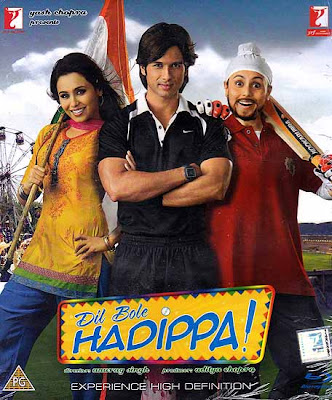 Veera Kaur is a self proclaimed "world-class cricket batsman, right- and left-handed", for sure the best one for miles around. However as a country girl travelling most of the time with a theater company, she doesn´t really get an opportunity to show her skills. On the other side of the world, in England, there lives Rohan, an accomplished captain of an English cricket team, up until the moment his father calls him back to India, where his own little team has been loosing for years. And even though it´s against a Pakistani team of his friend, he just really wants to win this time. Rohan, of course, leaves everything just to see his daddy gets a victory once in a while, and he becomes the new captain and starts auditions to find the best players.
What a better opportunity for Veera could ever come? However, you see, she is a girl, and as such not even allowed to audition. But taking an inspiration from her theater company, Veera does not give up – she throws away her kohl and bangles and becomes – Veer! Naturally now nobody has any objections against her being in the team. But this triumph has it´s disadvantages for Veera, one of them being forced to use men´s changing room. After being caught by Rohan in her female avatar in there, she quickly pretends to be Veer´s sister. And Rohan, after some arguing and bickering, falls in love with her....
Few more meetings and Veera too falls for the handsome cricketer, trying as hard as she can to keep other girls away, as well as rediscovering the hindustani dil in him, that has been exposed to way too much English influence over the years. It is also easier for her to predict and guess what Rohan´s feelings and thoughts are, since he goes to be adviced to the person he considers Veera´s closest confidant – her brother Veer....
I am not a fan of sport films. They always show a man/woman who are in a way an outcast and should not be doing the sport or are past their peak, how they challenge everything and in the end overcome everything, make it to the big finale where they either win or loose, but if the latter, it has a deep moral subtext and they always earn more respect than the winner. There are sport films that, even though with the same formula, can step out of the mould (best example is Chak De India), but Dil Bole Hadippa is not one of them. It is quite enjoyable for one watch, but there is not really a repeat value and throughout I just felt something was missing and thus it all was incomplete. Especially once the final match starts, the film seemed boring – which was the exact opposite of what it should be.

Rani was just brilliant and her comic scenes were priceless, she owned the film completely, leaving just very little space for Shahid, who seems rather halfhearted anyway. Especially his emotional outburst upon finding out the truth about Veer being Veera, seemed very much rehearsed. There is one scene where I was willing to forgive all, and that I will definitely cherish always: the little stage show with references to DDLJ, MPK and of course HAHK. This was the first (only?) time I ever saw anyone actually word by word acting the famous HAHK scene, as as delightful as Rani and Shahid were, images from the original films were simply flashing through my mind and I caught myself smiling at them. The film, as every true Yash Raj production, is beautiful visually, very colourful without making your eyes sore, music is forgettable.

The film failed to make the mark in history of cinema, it didn´t even do too well at the box office, and frankly I can understand why. The many flaws can always be forgiven and forgotten, but for that a movie needs to have a certain complexity, something that touches the heart or makes you think. Dil Bole Hadippa remains an OK one time watch without this quality.
Posted by Gaja Gamini at 13:33