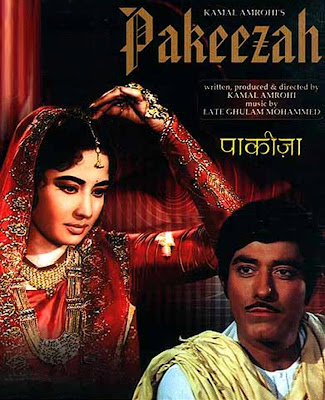 I love old Bollywood classics and I have a soft spot for all courtesans and tawaifs and their stories full of woe, yet Pakeezah failed to make any impact on me whatsoever. In fact I found it overall such a weak film I´m convinced it´s cult status and classic label are closely bound with the fact it was Meena Kumari´s last movie. A film, originally opening to a lukewarm response, became a hit overnight when Meena Kumari pulled off the greatest promotional stunt ever – she died. Succumbing to a long illness that slowly took her away, she gained a heart-breaking, tragic image, which lasts till this day.

We first get to see Meena Kumari as Nargis, a tawaif with golden hair and light eyes, who is dying out of shame over her profession. Hoping for a new life she runs away with her lover and they get married, but get a shock when his family refuses to acknowledge their union. Nargis thus without a word flees from her husband and settles in a cemetery of all places, where she intends to live without letting anyone know about her whereabouts. She gives birth to a child and shortly after that promptly dies. As we will see, her daughter, dark eyed and dark haired but again with Meena´s face, inherits not only her dancing skills but also her confusing way of thinking with no sense of logic, reality or self-respect. Why Nargis never tries to contact her husband – only sending him a letter knowing she will be dead by the time he will get it – or anyone else, even though she apparently has a sister who loves her dearly? It is just one of the loopholes that you encounter in the film. The sister however finds the child and raises her to also become a tawaif.
Eighteen years later the letter from Nargis finally reaches her husband (so stop complaining about your local post service), who decides he wants his daughter back, but before he can take her away from the brother her aunt secretly smuggles the girl out of town. And once the girl falls asleep in her train compartment while traveling, one of the weirdest and least believable love stories I´ve ever seen starts. And drags till the very end. What else do you expect though, considering it is about a relationship of a well-situated man and tawai´s feet. For the rest of the movie you only watch Meena lying down all over the place (indication of her poor health, but very uneffective for the character) and mope, and her moping doesn´t cease at any point, not even when she meets the guy with feet fetish whom she fell in love with through a short written note (mentioning her feet of course), not even when he takes her away with him and tries to marry her, and frankly she doesn´t even look happy at the very end, which is meant to be happy.
The character is so frustratingly confused it makes it difficult for the viewer to feel pity for her. There is only one scene that I would label as a highlight – when Meena returns to her kotha (after running away with screams from the man he wants to marry her) she holds a short speech about tawaifs being in fact just dead and breathing bodies. We can blame her illness for what seemed a rather half-hearted performance in the rest of the film to me, but at this moment she is brilliant. Even though I cannot agree with the content of her outburst. The only tawaif who seemed a dead body was her, and just moments ago she could have easily get out of there forever. I had a feeling she doesn´t even want to try and be happy. How am I suppose to like a character who has no sympathy whatsoever for herself? She is painfully, annoyingly weak. Her refusal to dance for the guests at one point is not a protest of any kind, she just feels mopy so she doesn´t feel like doing it. There is absolutely no sign of struggle in her, she is just completely resigned and at times even masochistic. Her dancing on the broken glass at the end is no way meant to show her inner strength or desperation. Instead it feels she just wants to inflict more and more suffering upon herself.
There is no thrill (in spite of a wild elephant attack) and hardly any emotions that would manage to reach out to the viewer. Meena had next to no dialogues and was really just looking sad and more sad throughout, the role of a dancing miracle was also not fit for her as she has to be one of the most awkward dancers ever on screen – and same goes for Padma Khanna, who was her double for the long shots. The male characters are all unsympathetic loosers, but women hardly fare any better.
The film only deserves a shot as the last film of a famous actress, and if anything, it is a sadness over the knowledge the woman you are watching was singing her swan song. And another good reason is the music, very beautiful music. The visual part of the film too deserves some plus points. The pink palace, Meena´s long hair in a fountain, play of colours, that all was beautiful to watch. In the end though Pakeezah was a big disappointment after all my desperate searching for a good copy with subtitles. I did not get an engaging story, I did not get an amazing performance, and I did not get another favourite tawaif.
Posted by Gaja Gamini at 11:24