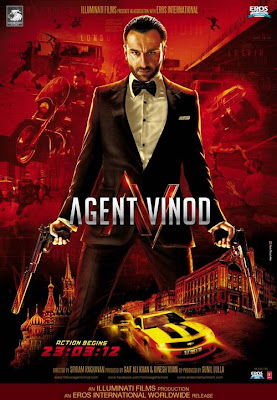 Fight it, if you will, but whenever a spy movie appears people expect to see a version of a James Bond. Stylish, dangerous but fighting for „the good guys“, witty, with awesome one-liners for every occasion possible, sexy and with women swooning at his mere presence. Vinod is no exception and he fulfills this generally accepted perception of a secret agent to the utmost, as is quite apparent from the first moment we see him all beaten up and interrogated by the bad guys in a terrorist camp in a middle of a desert, seemingly with no chance to escape his certain death. After causing a mild shock to the viewer by his pretended disloyalty and betrayed of his country he manages to escape with a minor help of his secret accomplice and even manage to rescue a beautiful girl wearing fancy desi outfit and having a flaw-less make up on in spite of being tied in a bag. And it´s time to get onto other things – like finding out why Vinod´s collegue had to die in Russia and what exactly is '242', which was the last info that the dead agent provided.

Vinod´s search takes us places very much undiscovered by the Bollywood camera lenses, from cold Russia to dusty and hot Morocco, to how-many-of-you-can-find-it-on-the-map Latvia and ultimately of course Pakistan and India. Spectacular cinematography gives each place its own identity and takes some of the best out of what the countries mentioned have to offer. The plot is interesting enough, but ultimately lacked the thrill and mystery factor for me, since unlike Vinod we can pretty much get the hint that 242 is actually a nuclear bomb. The film is cleverly edited. Usually it is easy to loose orientation among many flashbacks, but the editing really makes the best out of it and in this matter the film really gives the impression of being seamlessly put together.


Saif Ali Khan is today undoubtedly among the most talented and charismatic actors in India. He blends into the character of Vinod with admirable ease and the powerful subtlety he acts with is brilliant. He owns the film, that was apparently written for him, with him and about him, and gives him a chance to shine. The action sequences may not be completely realistic, but they seem to be, so why complain? The weakness of the film it´s the length of it all. The perfect editing needed to be more tight.

The villains are plentiful and impressive, all different from each other which makes it even more great. Leaving the villanious businessmen running the world aside, Prem Chopra takes the cake among them with his portrayal of a Moroccan gangster having no mercy with people but shedding tears over his pet camel. To get a glimpse of Gulshan Grover was also a pleasant surprise, after all I´m a 90s fan!


A character yet to be mentioned is Iram, or „Dr. Ruby“ played by extremely-good-looking-in-this-movie Kareena Kapoor. Why only now? Maybe because it seems appropriate to ad her to the final product without caring much if she has a place in it, which apparently is the case of the role within the movie. From the promos Iram was somebody I was looking forward to, but she is stripped of her mystery way too soon, and had nothing more to offer except for a very awkwardly choreographed and executed Dil Mera Muft – a truly not good a song that was originally propagated as the new mother of all mujras (Ha!). As if Iram didn´t belong in the story at all and Saif just really wanted his girlfriend in it. When you have a real life couple though, wouldn´t you spice the story up with something romantic? But all those hoping for some love on screen were hugely disappointed, as Vinod and Iram are anything but lovers.
Obviously hoping for a slick and rocking action movie coming to us from Bollywood may not be a completely futile one. No, Agent Vinod is not it. But it is a great promise for the future.
Posted by Gaja Gamini at 18:29