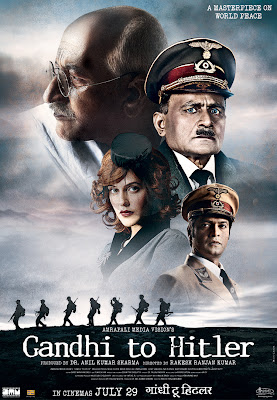 One could hardly find two personalities that deeply influenced the society and history and yet were so completely dissimilar then Mahatma Gandhi and Adolf Hitler. One with smile bore each injustice and suffering, refusing everything earthly as meaningless, the other longing for power over the nations and with head full of Nazi nonsense. These two man, living on different sides of the world, shared the same era. One is today remembered nearly as a saint, the other can easily pass off the greatest example of human cruelty.

The film starts with several quotes from letters which once Gandhi indeed sent to Hitler. We will never know if Hitler actually read those, but for the sake of the script let´s say he did. As the narrator clears out at the very begining, the movie is not about the Adolf Hitler the feared powerful beast, but about Adolf Hitler moping away in his hideout while the Russians are closing in and the war is about to end. That is basically everything we see. Hitler walking around two room and one corridor, Gandhi endlessly going somewhere talking wisdom, and an Indian legion on the run before Russians (more about that one later).

I was really hoping this would be good, but my, what an utter waste of celluloid. The whole concept of the film is completely insane really. The Nazis, The Russians, the French, everyone is played by Indians, which especially in the case of the Nazis is ridiculous (though it gave me a funny feeling of satisfaction thinking how they much have all rolled over in their graves.)

Historical inacuracies are bound to happen, and as long as the films is good can be forgiven if not forgotten, however that is not the case here. As terrible or pitiful as they were, the historical figures are presented as complete caricatures and there is hardly anything that would link the film character with the real person except for the name. In case of Eva Braun, who is in the titles mentioned as Eva Brown, not even that. Neha Dhupia, playing Eva, does a good job in her role though, and even looks European enough to pass off as Hitler´s lover. Raghuvir Yadav as Hitler too begins as fairly impressive, sadly later on he becomes a freak shaking like a pudding.

To hear „Germans“ speaking Hinglish was way too bizzare.

The (rather non-existent) Gandhi line of the story and Hitler moping are just two of the three storyline, the third one being about a lost Indian legion. Indians, originally fighting under the command of Great Britain, taken into German captivity, form a legion to fight alongside the Nazis, but as the end of the war draws near (and so do Russians) some of them are trying to escape from Europe and return to India (apparently on foot). This storyline held the greatest potential and could have saved a lot, however the action sequences are anything but thrilling, the characters have no scope to show any real depth and the Himalayas do not look like Alps. In the end one wishes the whole storyline was just not there at all, and at times one is almost relieved when we return to the moping Hitler.

The editing is not exactly confusing, but it practically tears continuity apart.

The film posters boasted with the line: „A Masterpiece on world peace“. More then the intended message of how goodness an humility conquers all you get the message that it sucks to be locked away in a bunker when you can do some trekking.
Posted by Gaja Gamini at 18:50