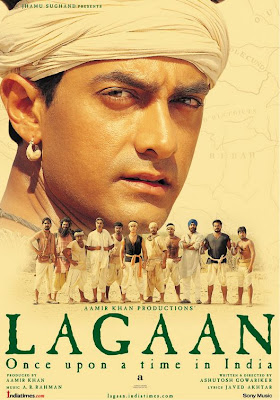 The complete title of this film is „Lagaan – Once upon a time in India“, so let us begin on the same note. Once upon a time, more accurately in the 19th century, it was the British Queen Victoria, who reigned supremely over the vast country named as India. And in her name the British ruled the land, that was so different from their own. One of the officers in charge of Champaner is Captain Andrew Russel. Sleazy, spoilt, rich, spending his time with hunting and thoroughly enjoying his stay in India, as it gives him a nerly complete freedom to ridicule and insult everybody. From the first moment you know he is the BAD guy in this. Once he decides he wants a local raja to eat a piece of meat, and when the latter refuses because of his religion, our dear captain decides he is insulted and in return he wants the area under his rule to pay the double ammount of lagaan (a tax given by the villagers mostly in grain). Naturally the villages are not as half as excited about the idea as captain Russel, especially since draughts has been troubling them lately.

One of the villagers, Bhuvan, is especially annoyed (which is somehow strange because while you can see others working, he himself spends his time spoiling the hunt of captain Russel) and he decides people should go to raja and discuss the matter. But raja is just right now watching a cricket match and so the villagers have to wait a while. Cricket to them seems rather silly, and after Bhuvan mocks the game, the English are deeply offended and captain Russel, never short of insulting an humiliating ideas, offers Bhuvan a deal: the lagaan will be completely forgiven for three years if the villagers can beat the English in cricket. But if they loose, they will have to pay the thrice ammount of the tax. After hearing out his companions´ advice (NO, BHUVAN! NO!) Bhuvan accepts the challenge.
After he manages to win over some of the villagers with a happy, optimistic song, and chooses his team, the training can start. And the instructor is none other then Elizabeth, captain Russel´s sister, who proves that nto all English are cold-hearted dogs. Elizabeth, appaled by her brother´s injustice, does her best to explain the rules and ways of cricket, and is so excited about her goal, that she managed to learn perfect Hindi in like two days. Being brought up by stuck-up and arrogant English society, she finds the un-washed and illiterate Bhuvan immenselly lovable and so she falls in love with him. That causes distress to Gauri – a simple girl who too loves Bhuvan. But as of now Bhuvan is only interested in the game. After he manages to convince the whole village (destroying the caste system in the process!) and much training (which involves lots of running, sweating and singing) the date is set for the game and the English and Indian cricket team face each other.....
When I started the film I was trembling with excitement. Aamir Khan is known for his great script sense, and after all the hype sorrounding the film is HUGE. I was expecting something AMAZING. I was expecting something BIG. I was expecting something GRAND. I got a cricket match. Maybe it would all work better for me if my expectations were lower and the match itself at least 30 minutes shorter. The only thing I really carried away from watching this was a new knowledge of what is a cricket (next to completely unknown in my soccer and hockey country). Because in the end I did not really feel any message about fighting the British or anything. The movie was more like a celebration of favourite Indian sport. And that, for me as a foreign viewer, is not good enough.

The film is very well made technically. The visuals are beautiful, the direction fine, the performances are good. Aamir Khan´s strengh has never been in facial expressions, but in his very clever dialogue delivery, and he uses that in this one too. Sadly Aamir, though signed as one of the best actors in my book, is slowly beggining to bore me. There is no realy difference in the way he plays the characters. I assume that him being a very „thinking“ actor is to be blamed. Don´t think, Aamir! Give us some spontainety, some madness! Of the supporting characters the most notable is Paul Blackthorne with great Hindi and terrible accents, wonderfully hateable and fit for his character. The two females – Rachel Shelley and Gracie Singh, have nothing much to do except for being in love with Bhuvan. One is a silent, romantic type, another a very earthy, straight-forward girl. Both are good in their roles, but do not leave much impact. After all, Lagaan is not even remotely a love story.
The real deal here is cricket. It couldn´t get any more cricket-ish than this! The match, which takes no less then half of the film (!) has everything a good match should have – cheating, fighting, abusing, chanting, injuries, and loads and loads of adrenalin. But it still remains..... a cricket match. Once you´ve seen it, there is no point of coming back (not that one doubts what the result is going to be from the beggining). Brilliantly shot. But with no repeat value.

The music of Lagaan deserves a mention for sure. Composed by the bow-worthy A.R.Rahman, all the tracks are beautifully melodious and hummable. Some are even addictive. „Chale Chalo“ has been drumming in my ears for days! Similarly „Mitwa“ and „Ghanan Ghanan“. The most beautifully picturized (if we forget the glistening male bodies in Chale Chalo for a moment, ladies) is „Radha Kaise Na Jale“. Pity Gracie Singh pretty much disappeared since Lagaan, becausei in this song she proves to be a very graceful, pleasant to look at dancer.

The song „O Rey Chhori“ made me perfectly see why song and dance work in Indian films, and why they do not really work in western ones. It was all so beautifully romantic when Bhuvan and Gauri share the intimate moments together, but as soon as „I am in love, yes, I´m in love“ comes out of Elizabeth´s throat I had a feeling I´m watching a Disney (plus I can guarantee you the nightgowns back then did not lack sleeves but cleavage!).
A film I seriously wanted to love, but only ended up thinking it´s good. And that, my dears, is not good enough.
Posted by Gaja Gamini at 16:17