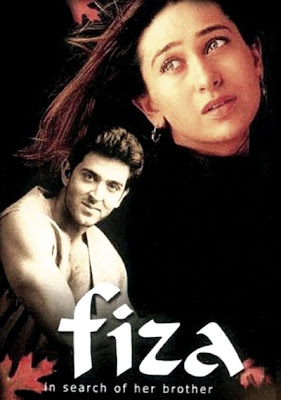 The Kapoor Khazana continues! After Rishi´s sweaters the next one of the family who deserves a mention is definitely Karishma Kapoor. After all, she is my favourite of the whole khandaan.

Fiza – what a simple name for film with such a nerve-wrecking story and also for a girl with so much to live through. Once a member of a small Muslim family consisting of her, her mother and younger brother Aman, Fiza has first been faced with the non-sensial cruelty of this world when Aman disappeared during the unrests of Bombay Riots in 1993.

Both mother and daughter left behind have a hard time coping with the painful issue, but where Fiza finds enough strength in her youthful stubborness and occupies herself with studies, her mother refuses to accept the possibility of her son´s death. Every week she goes secretly to a police station to inquire about her son, unaware Fiza knows only too well where she goes. And so Fiza suffers not only for the lost brother, but for her mother as well. Such situation lasts whole six years.
After much crying and shouting Fiza decides she has had enough of uncertainty and living on hopes and starts searching for Aman. But everything fails her – the law, the police, politicians.... bribing, threatening, pleading..... nothing brings any fruit, and only makes Fiza more confused as well as hated. She is slowly becoming a public figure and people, who similarly lost their loved ones, are looking up to her. All in vain. Aman seems to have disappeared from the face of the Earth, and nobody can confirm or deny his death.

But fortunately it is year 1999 – the age of internet has come! And a guy, who has been trying for ages to impress Fiza, googles out (cause it sounds stupid if I write "yahoos out") a photo of a terrorist group operating in the border area. And Fiza recognizes similar features in one of the photos. Refusing any company she sets out to find the person in the picture, and yes, on one night she finally, after six years of complete uncertainty, finds her brother. Very much alive. And very much a terrorist.

Fiza is a basically a family drama, but interestingly enough it portrays it more as three individual stories. There are different points of view on the same situations, all influenced by the character´s background and experience. While traditional, peace-loving mother cannot understand the tragic changes in her life, and ends up committing suicide with a feeling that she has failed in her most sacred task of raising her children, stubborn, adamant and hard-to-please Fiza uses anger to hide her pain. Because you feel that deep inside she is very fragile. And she knows that if the world saw her weakness, it would crush her completely. And then there is of course Aman, the most innocent soul, who after witnessing horrors, adopts a simple belief that freedom and justice need to be fight for with all possible weapons. They are all bound by deep love, but they all completely lack understanding and many a heartbreak comes out of their helplessness to communicate.
Karishma owns the film. She is perfect as Fiza. Her gentle appearance moves you even more when she reveals the hidden outrage. Her eyes are giving out all the emotions, everything is very honest and straight about Fiza. I think one scene I could have done without was her dancing in a club. True, she wanted to show others that she could act as all other girls if she wanted (but she doesn´t care to do so, because... she´s not!), but the weird choreography made her look awkward and didn´t really take the advantage of her excellent dancing skills. Also Fiza is one of the rare films where she was not made to wear skimpy clothes and ultra-short skirts, instead a simple white Indian attire and later more modern, but still not revealing clothes perfectly captured her character. Not to mention she look heavenly in white.
The film has also another rare exception – and that is that I actually liked Jaya Bachchan. I find this woman terribly annoying, just her presence on the screen often makes me cringe, but here she was somehow different. I cannot really put my finger on it. She just was. Maybe because for the first time her crying wasn´t constant and didn´t look artificial. Maybe because her dialogue delivery wasn´t so clichéd. Maybe because she really succeeded in creating a bond with Karishma and Hrithik on screen. And speaking about Hrithik, for me this was the best performance he has given that I´ve seen. Yes, I rate it higher than Guzaarish and even Jodhaa-Akbar. His physical resemblance to Karishma was only a plus and they created a wonderful sibling combination.
It is true though, that I did not understand the relationship between Fiza nad her mother. The way it was portraited in different scenes left me rather confused. We see them chatting away merrily, and the next moment Fiza is screaming that her Ami should forget Aman forever. Another time Ami is crying and Fiza is telling her not to give up hope. These constant changes in what Fiza wanted her mother to do were not handeled too well.

The numerous supporting cast does a good job, though nobody really stays in mind, except perhaps Johnny Lever (another rarity – he is funny and not OTT). Sushmita Sen did an item song for the film, but I must admit I was not taken in by her dancing or the song itself, and fast-forwarded through most of it.

Film works in both parts and doesn´t loose the pace or thrill, the ending comes of as downright nail-biting and very moving. You just don´t want Karishma to pull that trigger. And on the other hand you want Hrithik to be finally given the peace only death can offer. I read that Fiza did not do well at the box office. Yet another proof that the success of the film does not automatically comes with quality.
Posted by Gaja Gamini at 17:24