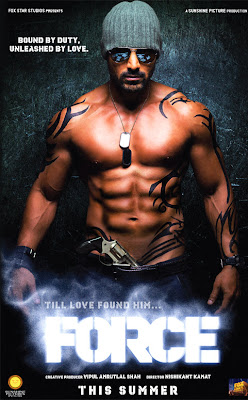 In spite of uninteresting angrez title and downright sleazy and hideous poster (that is definitely not the safest way of wearing a gun) „Force“ is a fairly well made action film, that at times felt like John´s attempt to turn super-salman-ish (the chest-baring anyone?), but unlike in most of Salman films the action is really hardcore and real. So real that at times a sensitive person will have to look away from the screen and will only look at it again once the noise stops. I am not over-familiar with John´s body of work, I´ve only seen him in Baabul, Jhootha Hi Sahi and Salaa-E-Ishq so far and in all three he played a mellowed lover-boy, so I cannot really tell how unusual (if even) is Force for him as a performer. All I can say is he definitely fits my idea of a rough police officer with sharp mind and effective muscles more than for example Abhishek Bachchan, who has tried to make the genius police walla his signature role by doing films like Dhoom or Game, but failed in my eyes rather badly.
Yash Chopra is a a tough guy working as an ACP of anti-narcotic squad, and despite being the sexiest, handsomest and awesomest guy for miles around he is a bachelor by choice. This brave officer is not ready to endanger anyone by being linked to them, and also protects himself from being vulnerable in this way. Throwing himself into the most complicated tasks he keeps himself busy fighting the drug lords – and one by one Yash Chopra and his team of loyal buddies manage to catch them all based on information received from a source, which a bit later turns out to be somehow unreliable. Apparently all the information were given out for police to clear the field and make space for a new, more powerful drug lord....

Meanwhile Yash Chopra´s bachelorship is endangered after several encounters with a vivacious, pretty Maya, who finally manages to get some feelings out of him by getting herself run over by a car (pretty stupid move to get a guy if you ask me), and Yash, after some more convincing from his friends and their wives decides that maybe he was over-reacting and perhaps he could get married. In time before the wedding, however, he and his friends are forced to kill a dangerous drug smuggler, and without being aware of it at first, there is going to be a real hell to pay, because his brother Vishnu, the new drug lord of India, is planning a bloody and unmerciful revenge aimed at all of them and their loved ones.
The filmmakers succeeded in creating a thrilling film, but somehow they did not manage to underline all that awesome (and gruelsome) action with emotional depth. At the base of everything there is supposed to be Yash and his fear of loosing his loved one, but not enough attention is paid to this aspect. It could have been portraited better. I also think more insight into the life of all four heroes would be in place, like this one didn´t really even feel for them – or for Maya, which is a bit of paradox, but channeling the heroines of the 80s she dances into the film as an obligatory love interest and draws back into shadows of oblivion as the story progressed beyond the romance bit. In the end you are shocked, but not really moved, which would definitely ad to the film´s appeal and it would earn it more points in my book.
Performances are just fine, nothing really stands out and nothing really disappoints in this department. If somebody really captures your attention, it is the evil Vishnu – a model-turned-actor Vidyut Jamwal, who looks slick, stylish – and actually dangerous. For once I was excited (though in this context it will sound weird) to see a villains who does not have a need to explain everything to his victims and actually kills them. It made him so freaking scary!

I also had very mixed feelings about the approach of John and his partners during the drug cases investigation and later also while trying to find Vishnu. Sure, one feels that law is not always right and at time is causes more damage then good, but as somebody wise once said "eye for an eye make the whole world blind".
Posted by Gaja Gamini at 13:09