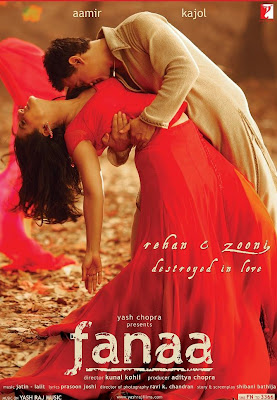 This film reminded me of something. I could not quite put my figer on it. But from the very start I had a feeling I have seen something similar, if not the same, before..... And only when it ended I realized it was one big mixture of DDLJ, Raja Hindustani, Fiza and Esmeralda (the first three being Bollywood movies, the last one a sickly sweet Venezuelan telenovela that plagued our screens several years back).

So we have Zooni, a simple, nice Kashmiri girl in love with her country. She is also in love with her dreams about the yet unknown to her Mr. Right. And she is played by Kajol, who doesn´t look a day older then what she did in DDLJ. So in result Zooni is actually Simran – with one difference only: she is blind (Esmeraldaaaaaa...... Esmeraldaaaaaa....lalala). After some convincing her parents decide they can let her go with her friends to go to Delhi and perform like a dance troupe in a ceremony for Independence Day. And since they are going to spend several days in the city, and they don´t want to just aimlessly walk around, they hire a tourist guide Rehan. And so Aamir Khan enters the film, lying lazily on his back and with an arrogant do-not-disturb attitude (that is the moment Pardesi Pardesi starts automatically playing in your ears). And guess what. He and Zooni fall in love almost immediately. Nothing wrong with that, but I must confess that I don´t find Kajol someone, who can stun you at the first sight with her appearance, and so it would have been better for me if Rehan actually took at least a little time before falling in love. Their bonding afterwards is done well, with Zooni leaving with him for a private sightseeing, him watching her performance with the dance troupe (in that song Kajol DID look beautiful) and finally getting drenched in the rain together and spending the night sharing a cot in not so completely innocent way. But by that time it is clear Rehan may not be who he seems (to the viewer, Kajol remains blissfully unaware). He receives a disturbing number of calls nobody talks about and he also occasionally mumbles something about himself not believing in romance, obviously trying (but not that hard as he could I must say) to shake off Zooni´s spell.
The love obviously cannot wait even for few days, and so Zooni makes a phone call to her parents that she fell in love and will be getting married. Oh, and by the way Rehan took her to a doctor (which obviously nobody else did before) and it seems she can be operated immediately (I want this kind of hospitals in my country!), after which she will regain her eye-sight! She undergoes the operation and when she finally opens her eyes, her parents are there, but Rehan isn´t. And the first thing they ask her to do is to identify the remains of a victim just killed in a bomb attack on a government building. And yes, she recognizes the sweater she made for Rehan herself.....

Something smells funny, nah? Especially because one remembers those mysterious signs pointing out that Rehan just may not be Rehan the poetry-loving tourist guide after all, and also because he is played by Aamir and you are just now in the middle of the film. While the first half is beautifully romantic and colourful, the second leaves the whole romance altogether and it turns into an attempt on a thriller. There are too many twists and turns to be described, but you can count on some not that exciting action scenes, some misplaced patriotism and an „unexpected“ reunion of the two main characters after years. And just like we have seen it in „Julie“, first sex equals to immediate pregnancy, so you can expect a mini-Rehan, who will give you some cheesy and annoying lines about trust and so on.

The film worked, especially the first part, mainly because of capable handling of the characters by the cast. The highlight is Kajol, who fits well into her Simran-mode, but her Zooni is more mature then Simran and also doesn´t have any pride. In the second half her role is, sadly, stripped of any real action (till the very end), but still she is the one who keeps the soul of Fanaa alive. Aamir is a good choice for Rehan, but one cannot help the feeling that the character is either badly written or wrongly understood by the actor. The best aspect about Aamir´s casting is his undeniable chemistry with Kajol, that for me is thousand times better then the one she reportedly shares with SRK. Who pleasantly surprised me was Rishi Kapoor. The fat guy in ridiculous sweaters romancing petite young girls disappeared and transformed into a big-hearted father – a role I completely loved him in. Tabu was a complete miscast. Her role had nothing to offer her and she was, honestly, rather unconvincing. The kid was terribly annoying. So yeah, it was mainly Kajol who found the best way among all the plot holes and at times rather bizzare situations that simply happen for the sake of something happening (even though I found her putting together bits of photos to create „Rehan´s“ face during her years of loneliness a big WTF moment). Aamir doesn´t raise any sympathy. He never seems to be sure of what he is actually doing, or even why. And he really annoyed me when he killed the only Rishi I ever loved (and the film-makers could have spared us him flowing under the ice. That was both over-creepy and hilarious.).
Here comes my favourite sentence: The visuals were beautiful. Be it sunny Delhi or snowy Kashmir (ehm..... Poland. But at least you cannot really tell from what is shown, unlike in some other movies, that will go to any length to convince you Budapest is actually in Italy.), everything beautifully underlined the scenes and the mood. The soundtrack is nice, with two songs being especially beautiful – both in melody and in picturizations. I have already mentioned Des Rangila, where Kajol dances with her troupe, and the absolute winner is Mere Haath Mein. Special mention goes to rainy Dekho Na. On the other hand Chand Sifarish comes off as rather ordinary and Chanda Chamke should have never seen the light of day.

It is a definite must see for any Kajol fan, and objectively speaking she couldn´t have asked for a better role as her comeback after motherhood. However the next time I want to watch a heroine shooting somebody she loves for the sake of higher good, I will choose Fiza.
Posted by Gaja Gamini at 19:24