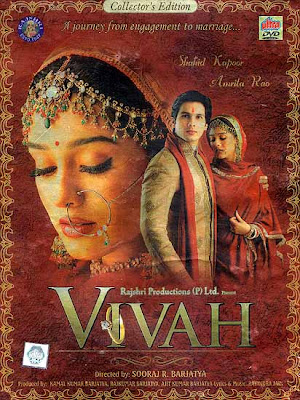 Twelve years after Hum Aapke Hain Koun Sooraj Barjatya decided to strike with another wedding video starring gorgeous heroine, handsome hero, loving families, perfect relationships (except for some minor flaws) lots of sweet songs and chocolates. However while Hum Aapke Hain Koun pulls off the rather non-existent plot brilliantly, Vivah, though there is nothing particularly wrong with it, did not manage to do so, neither it succeeded in recreating the magic.

Alokh Nath and Anupam Kher switched places and so this time Anupam is from the boy´s side, while the other one is raising the girl. She is not his daughter, but an orphaned niece Poonam. Unlike him, his wife doesn´t feel any love for Poonam, simply for the reason she has her own daughter who is dusky unlike perfectly beautiful niece.

Anupam is a father to Prem (Sooraj Barjatya has a thing for this name like Yash Chopra and Karan Johar do for Rahul), on a lookout for a bride. And who would have thought, Alokh Nath is in search for a groom for Poonam. And when these two meet, wedding is in the air.
The bride and groom take immediate deep liking to each other. The two families love each other too. And apart from a joined family holiday don´t expect anything from the most of the film. Sadly the songs and romance simply don´t match up to legendary HAHK, and so for most of the film I kept looking at the time line which was moving with a snail speed. I was glad that the two main leads are played by Amrita Rao and Shahid Kapoor, because they both are such beautiful people, you can at least concentrate on them, wishing they had babies in real life, because beauty should be preserved for the next generations, while nothing is going on on the screen. They indeed make a beautiful couple.

And then tragedy strikes. And yet again I just cannot help but to do a little comparism to HAHK – while there the tragedy caused a problem, even thought mainly because of some communication holes more then anything else, in Vivah the tragedy doesn´t change anything at all. And we are heading for a happy ending.
If you have a diabetes, this is not a film for you. Just five minutes would kill you, that´s how sweet everything and everyone is. They are all good in their roles. But none of the characters on their own are remarkable, and I highly doubt any of the actors would rank their performance in Vivah as their best.

Had it come out before Hum Aapke Hain Koun, I´m sure it would have been revolutionary (the way HAHK was), but since it´s coming a long time after, I couldn´t shake off the feeling that Sooraj Barjatya was simply trying his luck with the same story again. But Shahid Kapoor doesn´t have Salman´s charm. Amrita Rao doesn´t have Madhuri´s energy. And Prem´s nephew is nowhere near Tuffy (anyone else thinks the boy was a replacement of a „cute animal“ which usually is present in these kind of films?)

Vivah is a nice watch for a VERY lazy afternoon, and might be also ideal for putting you to sleep. Because in spite of being nice, it is unforgivably boring as well. In a way it really is what the full title promises: a detailed, idealistic documentary about a highly appropriate “way from engagement to marriage”.