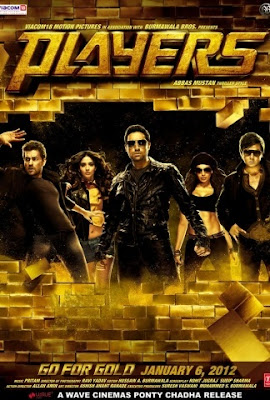 How can you take seriously somebody named Charlie Mascarenhas as a mastermind high-class, next-to-supernatural-hero thief? Even more so when he is played by Abhishek Bachchan (who just never learns)? Players (or by a more precise title „Thiefs“) was supposed to be a rocking action packed multi-starrer, but maybe it would have been better if the film was called off once people like Priyanka Chopra and Kareena Kapoor decided to say no to it, because frankly, though the cast is full of known names, none of them really sells on their own.

The „player“ Charlie with his awesome and genius mind, finds his way to super secret information about a transport of a huge amount of gold from Russia to Romania, which immediately becomes his next goal. However he´s not naive enough to think he can pull such a robbery off by himself, and so after a consultation with the best of the best players (read „thieves“), the aging and jailed Victor Dada (Vinod Khanna) he puts together a team of the best thieves with different abilities. His romantic interest Rhea (sexy but somehow boring and unpleasant Bipasha Basu) is to be useful in getting information out of certain men, then there are a master-disguiser Sunny (Omi Vaidya), explosives expert Bilal (Sikander Kher), a magician (Bobby Deol) and a hacker Spider (Neil Nitin Mukesh). And of course the super cool Charlie. However soon after actually pulling off the robbery Charlie finds out someone may have outsmarted him.... and there will be a hell to pay.
What kills Players are weak and unimpressive performances, artificial dialogues and in spite of some good twist and turns a considerable level of predictability (though the last may be just my problem, I always happen to know the bad guys from the start, don´t ask me how). I actually really liked the first half, as most of the bad acting and questionable script was compensated by a well made action sequence and nice speed that did not give one too much time to analyze. However after the interval it all slowed down and somehow lost purpose and whatever thrill there was left.


Abhishek is someone I never minded, but I still maintain what I´ve been saying for the past year - he needs to STOP acting cool guys with brilliant minds, because he just doesn´t deliver. Perhaps now after Player, Game and Dum Maro Dum flopped he will get the message? Unfortunatelly for him I think it is too late for him to reinvent himself (hoping to be proved wrong). Sonam has definitely improved, she does not make me cringe everytime she opens her mouth anymore, however she disappoints when it comes to anything emotional. There was NO difference in her expression whether she was flirting with Abhishek, casually serving food or wathching her father being shot. Bipasha is someone whom I fail to like, she just doesn´t pick good roles and just like with Abhishek it seems she is only good for one type of roles AKA we´ve seen it all before. Neil is by far the best, however still far from being impressive. All the actors (ironically with the exception of Johny Lever) give you the impression they totally do not care about anything, least of all about acting.
Posted by Gaja Gamini at 13:15