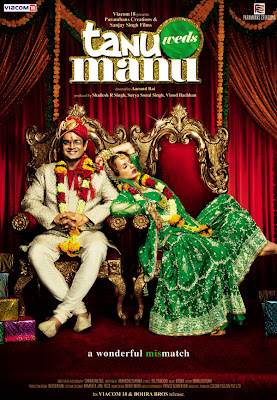 Out of all the new movies this one was the one I was really looking for. The trailers and promo pictures were promising a colourful, masala comedy with some fluff and romance, exactly that kind I´m so missing in modern Bollywood. Add to it I was completely smitten by Kangana in Fashion and completely taken in by Madhavan in 3 Idiots and what have you? Something to be excited about. Sadly whatever was really good about the film was in the trailers and the film falls into the unfortunate cathegory of „don´t expect much and you might enjoy“.

Manu (meaning „Manoj“) is a young NRI living in London and being a heart doctor. But his own heart is still very much asleep, and only to please his parents he decides to return to India for a time and get married. The girl, of course, should be as traditional and desi as possible. Manu is a quiet type without much expectations and ready to settle down with any decent girl. Therefore he , his parents and friend Pappi set out to find this perfect match. The first girl to be considered is Tanuja „Tanu“. Her family is somehow nervous though, when it comes to introducing the girl. After he is explained Tanu is ill and has taken some medicaments so she is sleepy, Manu is taken to Tanu´s room and right after the girl falls flat on her back, completely asleep and completely uninterested, Manu falls in love (really). The family happiness over the engagement is short-lived, when Manu, the very next day, says he does not want to marry. And only he and Pappi know that the real reason is Tanu, who, after regaining her senses, bluntly told Manu she´s not in the least interested in him, she has a boyfriend – and she was smoking while saying that!
Poor Manu then absolves the searching for a bride trip, but no girl really makes an impression on him or his parents. Sick and tired of the futile chase Manu plans to return to London, when an invitation for his friend´s wedding in Punjab reaches him. Manu and Pappi arrive, and very soon arrives also the bride Payal with her best friend – yes, you are guessing right – Tanu! Manu´s hopes are slowly growing again. He and Tanu spend some time together doing a romantic girlfriend/boyfriend stuff (which does NOT include any dirty things, it consists mostly of going for ice cream together and him choosing and buying her jewelery), only to be stabbed in the heart as soon as Tanu tels him she came to Punjab not just for the wedding, but is planning to meet her boyfriend and they are going to be secretly married themselves......

The story had so much potential it is almost a crime how much of it was neglected. It provided wonderful possibilities for some truly hilarious situations, but practically none were taken. In the result Tanu weds Manu is more of a romance then comedy, and not even as a romance it is convincing. The first and the foremost problem is: Why on the earth Manu loves Tanu? There is nothing, absolutely no redeeming quality about the girl, and just like her friend tells her, she´s „no Madhubala“ to count on her beauty either. Maybe was Manu charmed by her energy and spirit, but there is really nothing that could possibly make any guy I now truly love her with devotion (as we see it with Manu). She is unnecessarily rude, shameless, over-confident, self-centered and irresponsible, not to mention very mean and deceitful. And even as the film comes to an end and she realizes the value of Manu´s love, you cannot see any real change in her, even though that might be given by a very little screen time she is given after being „reformed“. Kangana, who made me gasp with her acting skils in Fashion, got on my nerves terribly in this one. Tanu in her interpretation came off as even more arrogant and FAKE then she would be had any other actress taken up the challenge. Her smile, her laughter, even her anger, all was way too unnatural and made me cringe. Tanu is therefore the greatest flaw of the movie.

Madhavan makes up for Kangana a big time. He is very natural, very charming, very nice to watch on screen. Sure, he is not the handsomest sexy male beast out there, never was and never will be, but there is something truly endearing and honest about him. He is like a big teddy-bear and I wanted to throw myself at him and be his good wife till the rest of our lives as I watched him pine endlessly after such an unworthy tramp.

Sadly Manu completely lacks any fire. He is believable as a character, but I wanted him to do more then just stand aside and help the girl he loved marry somebody else. No. He should have sabotaged the wedding attempts (one denial of having a pen at wedding registry does not count) and he should have been given some serious action. But the script fails and Manu, as cute and sweet as he is, does not have any lasting impact on the viewer.

The supporting cast is more interesting (except for Jimmy Shergill who is the exact type of guy I cannot stand) then the lead pair, which is in fact quite sad. The level-headed Payal and her way too eager for love making future husband are a rooted, real couple with wonderful chemistry, and Payal also shows us a woman can be a tough cookie with ideas of her own while at the same time hold some values and principles (unlike Tanu who takes her negativity to the extreme). Pappi is hilarious and unjustly wasted, I was hoping to see him romancing that one girl, but in the end it was a sub-plot that lead nowhere.
And why did Tanu take those sleeping pills and splashed them with vodka before meeting with Manu? What exactly did she want to do? Obviously not kill herself. And did she really think simply sleeping through the meeting will save her from unwanted aliance? I was more then puzzled.....

The ending did not really make sense. So Tanu´s family is worried about what Raj (her boyfriend) is going to do if they wed her to Manu and they decide to have him thrown into the lock-up for the wedding day, but as soon as the wedding procession arrives at the place where marriage is to také place, Raj is coming with his own baraat. Seems the police took the bribe for locking him up but then decided not to do anything. Kangana in the ending scene should have been given some space, after all the whole argument was about her, yet nobody even asks her to speak up, all she does is standing there with her mouth wide open.

There is some nice desi-ness involved though. The film is colourful, but not over the top, there are old Bollywood songs playing from the radio, there is a wonderful wedding happiness in Punjab..... Music and dancing are just above average. And I think that the same can be said about the whole film.
Posted by Gaja Gamini at 10:28