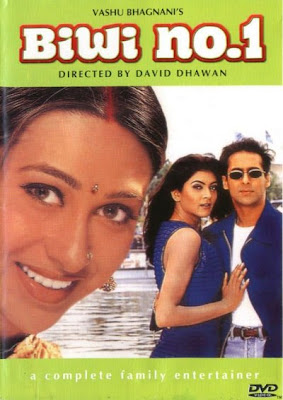 I could hardly believe that a movie like Biwi no. 1 could actually be such a hit. In fact Biwi no. 1 is one of the most atrocious Bollywood movies I have seen and with its cringeworthiness triumphs even over a „gem“ like Raja Hindustani. The not-so-original story goes as follows – Prem (who else then Salman Khan with this name, right?) runs a successful family company, is seemingly happily married to Pooja (Karishma Kapoor), who manages to cook, worship, clean, take care of two children, mother-in-law and a dog, and still looks absolutely glamorous. However the marital bliss bores Prem to death and as soon as opportunity arises he starts romancing one of his company´s models Rupali (Sushmita Sen). Rupali does not cook, does not clean and she only takes care of herself, but hey – she is sexy and instead of a saree she wears mini skirts. And since her dream has always been to marry a rich guy, she soon accepts Prem romancing her. By the way – he somehow forgets to tell her he is already married.

The two lovers take a trip to Switzerland (as if there were no other countries in Europe) but all the privacy is lost when they run into Prem´s friend Lakhan (played by Anil Kapoor which results into a vain but constant expectation of him bursting into a notorious song starting with „ram pam pam ram pam pam rampa papam pam pam. . .) and his wife Lovelee (aka Tabu being wasted) and they keep running into them all the more they try to avoid them. Inevitably Rupali learns about Pooja´s existence but Prem quickly comes up with another lie about his marriage being arranged and his wife being mad. Rupali believes it without questioning. Some time after their return Pooja, the biwi no. 1, learns about this biwi no. 2, thanks to her dog, who tracks Prem down to Rupali´s house because he knows it is not appropriate for his Master to spent Karwachauth with some other woman. After this Pooja asks her husband to choose between his mistress and his wife, but only ends up heart-broken as he moves in with Rupali.

What follows is Pooja´s war – even though I stayed unsure if she started it to get her husband back or to make his life hell. There is nothing inovative in the steps she takes against him and most of them are in the end more awkward then funny. As expected I was on her „side“ while watching Prem cheating, but as soon as she herself turns into. . .well . . . a bitch, she lost all my sympathy. In fact, Rupali seemed more appealing at times. The only thing that I appreciated was that the movie did not presented Rupali as being an evil person. All the characters, though, are acting somehow dumb and leave the viewer completely confused everytime. As much as one protests whenever a hero chooses the traditional Indian girl (traditional being the most important part) over a western wanna-be, it wouldn´t be as bad here, since the hero and heroine are already married and have family. But instead we are given the revelation that only if the wife too starts showing some serious skin and doing sexy photoshoots she can win her hubby back. And still – nothing is working (not even the emotional blackmailing of their two children, who do not hesitate to call upon the divine Big B himself to support their cause). Only after Rupali is deceived by Lakhan and leaves Prem he goes back to his family.
It is a film where everybody lies to everybody, nobody really bothers to understand the other, and all except the dog have no idea what to do. All the characters (except the dog again) end up being very unlikeable and one really does not care for them at all. Some atrocious acting involved. While Karishma and Anil Kapoor are stricktly OK, Sushmita Sen leaves no impression, Tabu is wasted and Salman Khan should be banned from ever trying to cry on screen. Saif Ali Khan in a cameo has no chance of saving anything. The children are extremely annoying – and the same word can be used for the musical score. There is not one memorable or even hummable song, and lyrics like „Ishq sona hai, ishq chandi hai, sona, sona, sona, sona“ are everything but golden.

Watch only if you are a MASSIVE Karishma Kapoor fan or are in a masochistic mood.