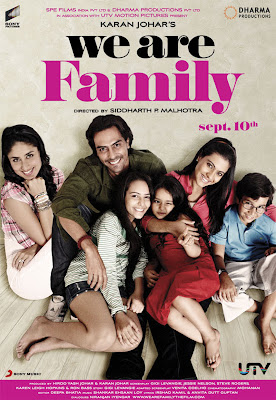 I never expect much from remakes, but I´m always giving them a chance. I have seen some good ones over the years, some not good ones but still enjoyable, and some even better then the original. Unfortunatelly „We are family“ doesn´t fit any of those cathegories.

So what have we here? It has been three years since Aman and Maya got divorced, but obviously they are absolutely at ease with each other. They have three children, all healthy, reasonably happy and unreasonably annoying. The idylic life continues up until the moment Shreya falls into it (literally). She is Aman´s girlfriend, and that combined with one ruined birthday cake makes her an evil witch for the children. Unlike Maya she has career ambitions, and though she honestly loves Aman, taking care of his three hyper-sensitive and hysterical children is not her idea of a day spent well. Plus she has no idea how to do so either. So the next thing you know she is left with them all alone for a whole day. She does her best. She cooks for them. She takes them out for an ice-cream. She tries to be friendly. They behave like the worst bunch of spoilt brats (OK – to be fair, this is mostly about the eldest one). And in the end of the day Maya demands that Sherya should never ever be left alone with her innocent little angels (a slap or two once in a while would do them all good!), because she represents danger to them. Why should they get friendly with a person their father loves anyway? And they don´t need another mother. Or do they?
But soon enough Maya finds out that she has cervical cancer. Aman´s immediate reaction is to break up with Shreya, then he moves back in with Maya to ensure children and her will be looked after. But now Maya sees that it just may not be enough.... and she herself asks Shreya to give up her career, all her dreams and come to take her place with completely everything from dressing the three bratty kids in the morning to baking cookies for the family.... I think that most of you already can guess the outcome of the film.

WAF (known among many Bollywood fans more appropriately as WTF) is lame. And if you don´t think it was lame, then you cannot call it anything else but average. And it is also a great example of how a moving story can turn out awkward. I did not understand why it takes place in Australia. There is not ONE reason for that. And I did not understand why Kareena Kapoor got a Supporting actress award, when she is so clearly the main lead. Kareena is the true saving grace of the film. Her character could very easily turn into an unlikeable one, especially seen through traditional Indian eyes. She was „the other woman“. But she managed to be just wonderful and you cannot help but rooting for her in everything she does. There is both subtlety and strength in her character, the whole range of emotions and she approaches the role with a mature understanding. Kajol too does more then well, after all she is one of those actresses who cannot be bad, sadly the script lets her down a big time. There is really not much she can do except slowly fading away – and making herself rather unlikeable with constant jealousy and over-protectiveness.
Arjun is lost between the two women. Even little Anjali and Ankush take over him when it comes to both screen-time and screen-presence. Which is rather sad, because he is a fine actor and his jodi with Kareena was delightful in the few romantic scenes we were given. His pairing with Kajol though doesn´t work at all. He is not only sidelined, but has really no place in the film, and probably realizes what it was to be a heroine in the 80s (used as an excuse for a plot and then to disappear into oblivion). The children are casted well, if they were meant to be annoying that is. While „Anjali“ and „Ankush“ loose the annoy-me factor througout the film and become cute, „Aleya“ maintains her coldness and over-acting. The two younger kids manage to create some bond with Kajol (Arjun is yet again left out of his own family), but Aleya is completely out of place from beginning to end.

The scenes with a potential to be moving are killed off by either 1. over-the-top hysteria, 2. done-to-death dialogues, 3. awful music. The last factor was particularly disturbing. The main theme is lovely to hear once, but it keeps returning again and again without any change to it, and soon enough becomes cringe-worthy. The emotional moments are marked by unforgivably insensitive rock song and do not even get me started at the horrendous Jail House rock remake – both the song and picturization (or the pointlessness of that whole scene. Dying mother wants to show her family that she is fun now. Like really?)

Instead of sobbing heartily I caught myself thinking about the fried chicken with chips about 20 minutes before the end. The artificial, straight-forward tear jerker made me hungry, but definitely not for more.
Posted by Gaja Gamini at 19:50