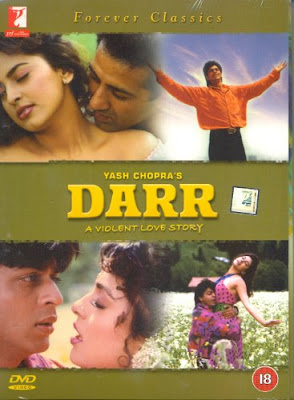 C-c-c-c-could somebody make Shahrukh Khan to play more villains? Don´t get me wrong, I usually adore his lover-boy image. But he is also the only one, who can play a villain and you´ll still end up rooting for him! Except for one case, but that´s not what we´re dealing with right now.

What we are dealing with is a girl named Kiran, who has (at least I think so) just finished her university studies. She is all that you can expect from a typical Bollywood heroine of the 80s/early 90s: wonderfully beautiful, angelic, nature-loving and sweet, and she wisely leaves all the action to her lover, army officer Sunil. He is all that you can expect from Sunny Deol: muscular, Rambo-ish, muscular, macho and muscular. And to make it all more obvious, his entry to the film is on BIG scale. He, completely single-handed, kills a group of terrorists (who really need a lesson on how to shoot a person who is completely uncovered with a machine gun) to save a little girl, while the rest of his team only joins him so they can raise a big „Hurray!“ when he hugs the child. The sheer naivity and the stolen music make that whole sequence one of the most ridiculous action scenes I´ve witnessed. But then again, this is SUNNY DEOL and we all know that he doesn´t need a commando behind him to annihilate a bunch of childish terrorists.
But even Sunny sometimes needs a breather so he takes a leave for few days and together with Kiran they enjoy some quality romance time together, dreaming about their future house that just might have magical door leading straight to the Swiss Alps. And from time to time Sunil, like any other guy, thinks it is funny to either 1. fake his own death or 2. to scare Kiran to death with fake murder attempts. But their personal paradise, just like any other paradise, does have a snake. Kiran gets startled by weird phone calls and even night encounters during which an unknown person is aiming a flashlight to her face, while stammering her name and something about loving her. And he also plays a harmonica under her windows. Yes! That is where our dearly loved villain SRK steps in and makes all the bubble-gum fluffiness interesting.
So who is this only interesting character of the film? Since Yash Chopra was always quite lazy when it come to names, he is called Rahul. He loves K-k-k-kiran, but has always been too shy to tell her when they were in college. So now he calls her every day several times to tell her, plus to make bigger impact he is haunting her steps, threatens Sunil, projects her photos on the walls of his room, tells stories about her to his dead mother and let´s not forget he carves her name into his own chest with a knife. I´m not a psychologist, but is Yash Chopra trying to imply that Rahul is mentally disturbed? Maybe he really is. And maybe he will befriend Sunil to get closer to Kiran. Maybe he will be helluva mad if Sunil marries Kiran. Maybe he will decide to kill Sunil. Maybe he will kill some more people in the process. And God only knows - maybe he will dream of having his own song with Kiran in the Swiss Alps.
The film terribly drags at times and it would have been better if it lasted 2 hours instead of 3. It attempts to bring together romance and thriller, but only the thriller part somehow works – and that only because of Shahrukh Khan. Sure, we all loved Amrish Puri whenever he turned out to be bad (which was like 99,5% of the films he did), but did you actually want him to throw those kids into the acidic bath under his feet? No. But with Rahul you want Sunil to remain lying dead in the woods and you want Kiran to realize Shahrukh Khan is much more loveable then Sunny Deol. Plus even though they are paired as a jodi in only one, dream sequence song, Juhi has better chemistry with Shahrukh then with Sunny in the whole film. Sadly the filmmakers did not emphatize with my sentiments and we were forced to witness Sunil literally rise from the dead, without any information whatsoever to localize kidnapped Kiran, then swimming (!) several hours to reach the boat and finally killing Shahrukh, while Juhi is screaming “Kill him! Kill him!” (that alone indicates something is just wrong with the film – and it the look on Shahrukh´s face will break your heart).
And just as his character is the only interesting one, Shahrukh´s is the only performance worth some serious praise. Sunny Deol comes off as stiff and cold, way too perfect to be real and way too macho to be loved. Juhi is one of the actresses who cannot act bad. Not ever. But her roles in the commercial cinema were never powerful, meaty ones and as Kiran all she has to do is to be scared and beautiful. She does both superbly, but there is nothing more to her. Special mention goes to Anupam Kherr in his comical role as Kiran´s cricket-obssessed brother. In this film he is genuinly funny without embarassing himself (which is always a relief in Bollywood films).

Not a bad watch, but no Magnum Opus either. After viewing you might feel a sudden urge to pack and immediately go to Swiss Alps.
Posted by Gaja Gamini at 17:03