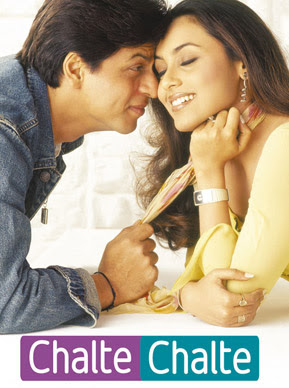 Sometimes I am simply in need to see something with Shahrukh Khan, no matter what it is, no matter what bad things I´ve heard about it. There was nothing particularly bad (or good for the matter) that I´ve heard about Chalte Chalte, and people hardly ever mention it, if they are not talking about the infamous Aishwarya bussiness. After seeing the film I know why. Because there is really not anything that would 1. stay in mind 2. make one go gaga (except for several shirtless SRK scenes) 3. irritate you.

Raj and Priya are both extremely attractive people from two completely different social classes, with different views of the world, life and just about everything, so they naturally fall in love. They get married after just several days. And then they realize it may not have been the best idea, as they keep fighting each other everyday over most trivial matters. They go from heartbreak to heartbreak only to realize love conquers all in the end. That´s it.
If it aims to be a love story, then the plot fails, even though the first twenty minutes are pure romance with all the naivity and fluff of Bollywood films, including infatuation at first sight, singing  instead of talking and also washing cows in the country. But as the film progresses one can see that the romancing at the beginning was just an excuse for showing us the story of man´s ego and pride. And the portrayal of it, with all the sudden ups and downs of Raj´s mood and nearly violent outbursts of anger is very real (I know some people who are exactly like that). Unfortunately the role and the film had nothing to really offer to SHAHRUKH KHAN, and Rani is even more wasted. They are both absolutely terrific actors, but here the script lets them both down - and most of the time Rani was on screen I kept imagining Aishwarya in her place, because ironically her more OTT acting and more OTT crying just might have, in the result, have greater impact. Serious lack of chemistry between the two characters doesn´t really help to save the day. And when the end comes, you cannot detect any change at all - neither in Priya nor in Raj, and one has to ask why did you have to endure this whole teary/screamy journey if it is, most likely, going to repeat again.... and again..... and again......
There is another irony as both Shahrukh and Rani had previously done films dealing with basically the same issue – marital problems. Rani did Saathiya and Shahrukh Hum Tumhare Hain Sanam, which both had their share of success. Chalte Chalte is more polished (and technically more relevant) HTHS and slightly more mature version of Saathiya. Which leaves you with another problem. You have seen this before. And with the same actors. And as it happens just one year before.


There were little thing I loved though. First is the memorable scene of Priya coming for the first time into Raj´s appartment as a bride. The way how he quickly improvizes to finish all the rituals was absolutely sweet and well done - and Priya´s expression as she looks around and sees all the guy´s mess make you honestly laugh. This is also probably the first film where I did not see Johnny Lever being the fun part of the movie. On the contrary - it was almost painful to watch him, and I must say he was incredibly convincing and I wanted to know more about him and his character then about the whole main plot!
When it comes to music, again - nothing makes you excited and nothing makes you roll eyes. It is "normal", if you get the meaning. And "normal" is the whole film. I wouldn´t recommend it to a person who is not in love with either Rani or Shahrukh, and even though I love them both, it is not a film I would need to see twice.
Posted by Gaja Gamini at 14:47