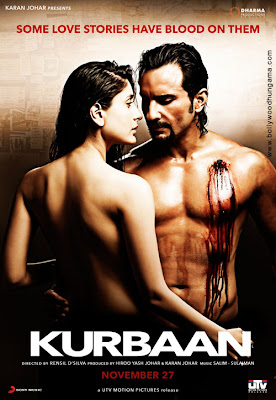 Why do I choose to watch and review so many dark films lately? Maybe the annual winter depression is settling in and results in my need to watch some grim films and review other grim films, which give you nothing but grim feelings and eventually some sickening tightness in your stomach area as you watch the actors suffers, bleed, suffer, weep and suffer. Kurbaan is one of these films. Just like „New York“ before it and „My name is Khan“ after it Kurbaan uses the tragedy of the 11th September 2001 as its background and also a point from which the story goes.

Avantika is a college teacher living in Delhi. Young, unattached. Up until the moment a new teacher Ehsaan appears in school and since the first minute is making passes at Avantika in a manner that would earn him a sleazy stalker label in my book. Fortunatelly soon enough he turns all that into coffee breaks and more regular stuff... and ultimately wins his prize when Avantika, her head and heart all messed up, not only gives into the relationship in spite of everything, including knowing him for a short time and religious differences. Because she is a Hindu and he is a Muslim... suspicious yet?
Avantika used to teach in the US and only returned to India because of her father´s illness, but now her American university is wanting her back. But she is in love, nah? How can she just leave India for her career now that Ehsaan is busy romancing her day and night? And so Ehsaan does a oh-so-noble gesture and declares his love is more important than his job and he is more than willing o relocate to the US with Avantika. They get marry and he thus gets a right to live and work in America..... suspicious yet?

Ehsaan starts teaching at the university, together with Avantika  they find a house in an Indian (mostly Muslim) neighbourhood.... life is perfect, nah? Up until the moment one of the neighbours, Salma, reveals to her that the people around may just not be as peaceful and nice. Her husband does not want her to leave the house. And he has a secret. And Salma asks Avantika to contact a journalist Rihana and ask for help, because she herself cannot do anything.... Avantika is disturbed. Even more so when Salma disappears the very next day... Now pregnant and very much bewildered Avantika is suddenly finding out the horrifying truth. Her neighbours are terrorists. She needs to tell Ehsaan! And so she runs into his arms only to realize he already knows. And what more. He is one of them.... now – which one of you have not seen that coming?
The predictability factor is one of the main weaknesses of Kurbaan. There are too many things and details introduced with an intention for things to look normal, but hey, we are watching a film. We know that 99% things that happen are not unintentional, that almost everything is supposed to be remembered because it is coming to our attention later. The whole plot is of course sickening, just like any kind of terrorism. But there is hardly anything that would surprise you. And considering Saif Ali Khan is the main lead, it comes as no shock that they tried to make him a „likeable terrorist“, who is only a terrorist because he lost his family, and who now loves Avantika, and basically we should feel pity for him. I cannot say I did. True enough there are likeable villains in the reel world that one feels for – from Shahrukh Khan in Baazigar, Amitabh Bachchan in Agneepath to most recently Priyanka Chopra in 7 Khoon Maaf, but the difference between them is that they do not kill hundreds of innocent people. Even a through and through evil character like Don, who doesn´t forgive and is a complete Kamina is more likeable than Ehsaan!That said Saif acted brilliant and looked hot, in spite of wearing a heavy make-up, looking almost girly at times. Overall the performances are really the only thing that keeps Kurbaan above the water and saves it from drowning.
Kareena may not really look convincing as a university professor, but vulnerability she displays makes her a perfect choice for Avantika. Since the first part of the movie is mostly told through her point of view (her settling in the new neighbourhood and slowly unveiling the secrets had a funny X-files vibe by the way), it makes one sorry that the other half focuses more on Saif and his „friends“ planning an attack while she is mostly just lying in bed and crying. The other couple that impresses with their screen presence and commendable acting are my very much adored Om Puri and not-sure-what-I-feel-for-her Kirron Kher. They are menacing, just one look at them teaches you about respect. And they are so damn good.

All that said the final word that can describe Kurbaan would be „boring“. Except for two or three thrilling sequences (Avantika finding the truth, Rihana on the plane, the climactic chase against the time) the film feels never-endingly long and the snail pace is sure to wear one out soon, especially since there are no changes in the settings, music or anything else that would demand full attention. The terrorists are ultimately evil, their women ultimately innocent and Ehsaan, being a „likeable“ terrorists, is allowed to promptly die with Avantika crying her eyes out before him. And sadly the boring factor of the film is so high it lowers the rating considerably.