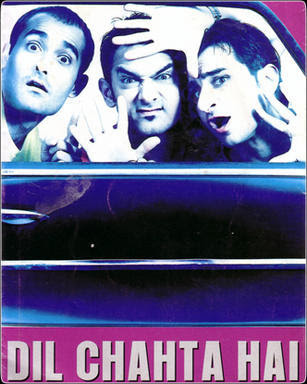 Searching for some background information about this film I came to know that it has achieved a cult status. Objectively speaking – no wonder. The movie captures the sensitive period of coming of age, when young men (because they hardly are boys anymore) become „full men“. Three distinctly different characters taking three different paths. True enough – Aamir Khan in the lead is filthy rich and with opportunities hardly anyone in society has, still there are traits to him and his friends that the audience could connect with and find themselves in.

Akash, Sameer and Siddhart are best of friends, who just graduated and find themselves in front of the age old question: What now? Akash seems quite comfortable lazying around, Sid would like to pursue a career as a painter and artist, and Sameer dreams of nothing else but a perfect romantic relationship. Their dosti only suffers a critical wound when Sid falls in love – and that with a woman who is not only 15 years older to him, but also is divorced, has a daughter and serious problems with drinking. All that notwithstanding Sid finds in Tara somebody he can share everything with, even ideas, feelings and thoughts that he kept secret even from Akash and Sameer. However when Akash learns about the way Sid feels, he insults both Tara and Sid´s feelings for her in his ignorance. Rift is created, Sid leaves the city for further studies, Akash flies to Australia to manage family business and Sammer is left behind, without friends, and in love with a girl, who loves somebody else.

At this point one story divides into three, that only come together at the end, just like old friends, who finally realize they mistakes and find strength to forgive and ask forgiveness. Aamir Khan gets the biggest scope with his story, that sadly is the least engaging of the three. Akash is yet another Bollywood hero who doesn´t really believe in love, and so of course he bumps right into Shalini (fresh-faced and clear-eyed and all kinds of cute Preity Zinta), which naturally leads to him falling head over heels with her, althoug for some times he doesn´t realize it. And then there is the problem with her already being engaged. Sameer is completely sidelined, as his pursuing Pooja (Sonali Kulkarni), is not meeting with a success for a while, but all´s well that ends well. His bit of the film is a sweet romantic comedy. Sid´s story turns all sad and melancholic, because Tara refuses to accept his love, too scared of consequences, and Sid doesn´t find support even with his family. Ultimately his first love takes course to a tragic ending....

Aamir Khan gives his standart performance – reliable, good, nothing amazing. Ironically he looks less of a student than what he did several years later in 3 Idiots, and the whole time I just wanted to grab a razor and shave off that horrible thing from his chin. Saif Ali Khan reminded me of a cute puppy in this, always just hoping for everyone around him to be content and happy. The best performance of the three though is given by Akshaye as quiet painter, who knows too well his feelings will be questioned, judged and condemned. As for ladies – Sonali Kulkarni is hardly worth a mention, while Preity Zinta pulls off one of the bubbly roles she became famous for, looking very lovely throughout, and Dimple Kapadia impresses as Tara, a woman who has seen the worse sides of life. There is depth to her, and in consequence also to her relationship with younger man. That storyline, rather daring and unusual, deserved a way more space than Aamir/Preity love frolicking in Australia.

Dil Chahta Hai is a pleasant film – about friendship more than anything else. It is not the best one on that theme, but one of the best of the past decade for sure.