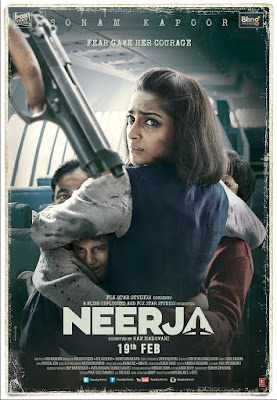 I have never heard the name Neerja Bhanot before this movie was announced and brought to my attention all those months ago. Learning the story of this brave, brave young woman moved me greatly, and today I wouldn´t hesitate to list her among the few people in history that we should indeed be inspired by and remember. The tricky thing with biographical movies is that they mostly rise and fall with the abilities of their cast. The name of Sonam Kapoor did not fill me with hope. But I was wrong. So go ahead and read below why I have no qualms admitting it.

The greatest weapon and strength of Neerja is not the direction, the performances, music or camera work. It is the underlying fact of the events actually happening in reality. This knowledge is with the viewer from the first moment to the last, perhaps because of that, because one knows how this ends, small details shown about Neerja are more poignant and touching than perhaps they would be with a fictional character. There is little to complain about when it comes to the technical aspects of the film, everything seems apt and well executed. Things like winding the tape with a pen, as well as Rajesh Khanna´s posters on the closet doors are beautifully evoking the mood of the 80s.

What to say about Sonam Kapoor as Neerja? I have so many reservations towards the girl as an actress! And I am not going to praise her as "great" in this film either. Because she wasn´t great. She literally became Neerja on the screen. There wasn´t a single moment, a single scene or second in which I would see Sonam Kapoor as herself (something she does on regular basis in most of her other movies). There wasn´t any dark, intense brooding, which so often accompanies "great" performances of male actors, nor was there any passionate speech on the injustice of the society (which marks "great" female performances most of the time). Everything Sonam did as Neerja felt natural, never over the top. Perhaps that is why her performance felt real - with Neerja she was not creating a new, unknown character who is made up. She could research an actual person, listen to and read what others had to say. And she managed to slip into all that seemingly effortlessly. She did a beautiful job, and I hope she continues to surprise me. Her rapport with other actors, especially Shabana Azmi, was delightful.

Neerja´s failure of a marriage back story is very well edited into the main plot, showing how previous experience has probably helped to shape her character and influenced her decisions. From what I had managed to gather the film is fairly accurate and that makes it even more painful. Perhaps my only criticism would be about the movie´s length. When the chaotic climax came I realized there was still over twenty minutes of the footage left! And even though the scenes following seemed important from the human point of view, I wouldn´t be as tolerant of them had it, again, not been a true story. The effect of Neerja´s violent death and deep horror and sorrow I felt over it was dilluted bit by bit by everything that followed, including the Shabana Azmi speech. I understand that was to be the actresses´ big moment in the film, yet by the time she could wipe her tear I have lost my own. (Do I seem heartless now?)

As a movie it works very well. I guess it wouldn´t be too exciting for casual movie goers craving a good thriller. But as a tribute it works wonderfully. And everyone should know who Neerja Bhanot was.
Posted by Gaja Gamini at 21:27