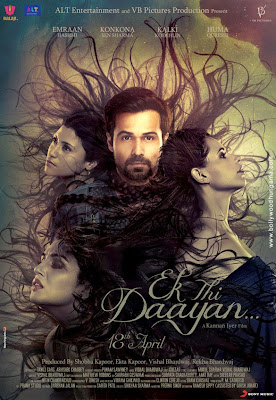 Bollywood and horror genre have never been the best of friends. I personally am not a horror fan. I watch one in approximately ten years and then am afraid to go to the loo in the night for three months, but Bollywood horrors, or rather attempts at making them, have left me yawning. Ek Thi Daayan seemed to be different for most part, but then even this stayed at the „attempt“ stage. It is brilliant in parts. And rather a let down on the whole.

Bobo the Baffler (who the hell gave him that name?) is the most famous magician in India, but his seemingly successful career and happy personal life (the dude is dating BEAUTIFUL Huma Qureshi) is plagued by memories of his childhood, and visions of the past. Once upon a time a little boy Bobo lived with his father and little sister Misha in a Mumbai flat, and dreamed of becoming a magician. One would expect him to practice the usual tricks of the trade, but Bobo wants more than that. Upon studying a rather obscure book on witchcraft he learns that the devil´s number is „666“ and following a sudden idea he goes into an old elevator and presses the number 6 three times. Together with Misha he finds himself taken by the elevator far below the surface, into „hell“. The children escape, but soon after a mysterious woman Diana enters their lives, enchants their father and joins their household. Bobo cannot help but to suspect she came from the „hell“ down below and she is in fact a witch – daayan, who wants to harm him and Misha....

What seemed to be quite a mind-blowing horror for the first hour continued with good, but not really as awesome footage crowned with completely laughable, cartoonish climax that almost completely ruined the overal impression. Indeed, the build-up, the mystery and uncertainty of the beginning, when it was possible to make excited guesses if everything wasn´t actually going on in a messed up imagination of a child, gave me creeps and chills, not to mention it was all brilliantly acted. Konkona, of course, is the queen, but both children were truly excellent, which is a lot considering how LAME 90% of child actors in Bollywood have been and continue to be. And a little personal info: one of my worst nightmares as a child and even now have always been an elevator that just doesn´t stop in its descend and going down and down and down....

The second half, even though more slow-paced and without being really scary, still had potential, but the ending makes Ek Thi Daayan seem like yet another B-quality horror films Bollywood has churned out in the past. It reminded me of the lameness of Raaz 3. Too blunt a revelation of supernatural actually takes away from the terror that one feels when he just cannot explain or ever understand. Not to mention there are some things that just get confusing (Bobo is a demon? Eh? What? Why? And how did he regain his „powers“? And by the way how did he explained the disappearance of his wife in the end? And why did the psychiatrist begin to believe in the witches anyway? What was it that he found?). Emraan is being himself as usual, with the same expression and same way of speech, but I did not really mind it here. Huma is very good, except the very ending, when everything turned ridiculously theatrical. Kalki has more of a guest appearance than a full fledged role, and in spite of a secret that is hinted to be surrounding her, she turns out to have very little to do.

Music is good, especially the song during the opening titles sets the mood really well, then again there is always Totey Ud Gaye to make appearance while being useless and not fitting in the story at all. What I found disappointing (apart from what I have already listed) was Bobo´s magic shows and tricks. They were way too obviously fake and computer made, and at times reminded me of the boring talent shows. I couldn´t help but to remember Hrithik Roshan as magician in Guzarish – now that was beautiful and awespiring. And how do you even expect me to take seriously anyone named Bobo the Baffler. 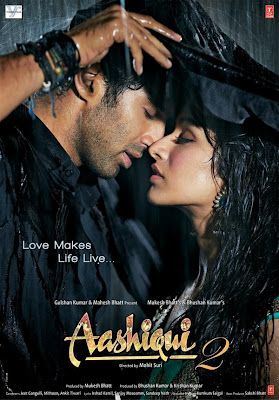 I still don´t get the massive appeal of Adiya Roy Kapoor among girls, but while he may have not gained another stan in me, Aashiqui 2 did managed to get a special entry into my „good Bollywood films of 2013“ book. It reminded me why 90s films, often flawed and far from perfect, are still ruling over hearts. It is not just about the technical aspects or acting, it is always about the story and the way it is told. Aashiqui 2 feels VERY 90s to me, and in a certain way reminded me of the first Aashiqui, even though it had nothing in common with it in terms of story, neither were there any references. I think it was the passionate love that just wants to exists, and also that the two leads are (were – till the film released) not well-known and not exactly great actors.

First Aashiqui was basically about jealousy on the professional level (where the boy couldn´t cope with the fact his girlfriend had a successful career – unlike him. Booo.) and judging by the first part of the film, I assumed it would be the same case for this one as well. A famous singer Rahul, who likes to see the bottom of the bottle, meets a beautiful, yet unsuccessful bar singer Aarohi. Taken by her voice and simplicity he decides that she should get a chance to become a superstar, and it doesn´t take him much to convince her to come to Mumbai. After few (later proven insignificant) blunders along the way Aarohi is the new sensation while Rahul himself is quickly fading away from the public mind and his career seems to have reached a dead end. Being jealous of a girlfriend would be in place, no?

It is not so though. We are not concerned about something as shallow and superficial. Love between the two protagonists has something not many movies can portray – purity. This is a love story that doesn´t waver. It stands strong. For better and for poorer. And not even death does them part, even though one of them stops breathing. In a way it reminds one of Rockstar (2011), which was even higher on emotion, passion and self-destruction, but the love in Rockstar has lot of selfishness to it. Aashiqui 2 love has none of it. It is a love of caring and sacrifice face to face in a fight with alcoholism.

However all these lovely (and painful) feelings I am having as I write come almost exclusive from the point in the story when Rahul for the first time fully admits he has a serious drinking problem and asks Aarohi to help him. That was the exact moment when I finally felt love between the characters, until then a lot spoken about but not shown in a manner that would move me. The film, for a long time, is actually rather boring. It is the last 40 or so minutes that arrive with emotions a viewer can really share.

Aditya Roy Kapoor is not a bad actor, and he does his job well, he however lacks screen presence for me, neither do I find him an eye-candy. Shraddha Kapoor, whom I previously loved in Luv Ka The End, is extremely lovely to look at, having a gentle grace of vintage actresses, sadly her dialogue delivery completely sucks (to the point I wonder if she was dubbed in LKTE) and is so monotonous it makes one cringe. She saves her performance by emoting with her eyes and face, but she will indeed have to work hard.

Since the first Aashiqui film was more about music than anything else, a lot was expected from this particular soundtrack. Does it deliver? Oh yes. All the songs are good, several deserve the label of beautiful. But ultimately on the music level the original film reminds to be way ahead of the sequel in terms or being memorable.