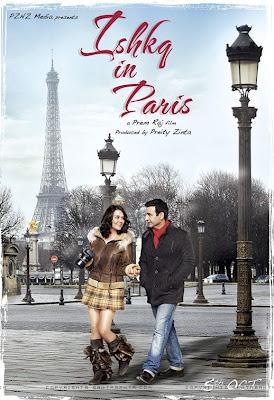 Madhuri´s Aaja Nachle may not have done well, but it was a good film. Sridevi´s English Vinglish was, of course, wonderful. Nobody has ever seen Raveena Tandon´s comeback film, but I hear it was critically acclaimed. Karishma Kapoor´s Dangerous Ishq last year was only dangerous to good taste, but she is now defeated in the „worst comeback film possible“ category by Preity Zinta. At least Karishma was offered the film and somebody else paid for it. At least as a basic story Dangerous Ishq was promising. Neither can be said about Ishkq in Paris, a film that may just be the definition of „useless“ from now on. Imagine the most simple cliché for a „modern“ love story. Add nothing creative, original, or – God forbid – unexpected. There. You have Ishkq in Paris.

Meeting on a train through Europe, two free thinking individuals bump into each other. A businesman Akash and a photographer Ishkq then decide to spend an evening in Paris together, just to part ways in the morning and never to see each other again. No baggage, no emotional bonding. Just fun. No sex, btw. By „fun“ they mean sitting in restaurants and riding carroussels. And then they part. But Akash cannot forget the completely inappropriately dressed-in-clothes-I-would-slap-my-teen-daughter-for-wearing Ishkq and when an excuse comes up he breaks his promise of not meeting her ever again, stalks her down and within days they are both in love. However Ishkq still has issues, because once upon a time her parents split up, which means she does not believe in marriage (because obviously all couples break up and leave each other and no relationship deserves a chance). But then she changes her mind, after her mum tells her, daddy did not leave, they agreed on living apart. And because that completely changes everything, Ishkq catches up with Akash and next thing you know they are in India getting married. The end.

The story is just ordinary, lazy and painfully boring. With no real twists and no real depth. And no point. True, sometimes simplicity is the key to charm, but there is different between simple and just boring. The film has little over 2 hours, yet it feels like a small eternity. The visuals could have been better and the songs also do not add to the entertainment value (no matter how much of Salman Khan you stuff into it). The two main leads have no chemistry and look mismatched, and the biggest fun you have with them is while trying to guess who is wearing more make-up.

Rhehan Malliek does not deserve a second thought. He doesn´t stay in mind and does not impress. Preity, unfortunately, does not fare much better. Of course one cannot expect her to be the fresh girl interested in Shahrukh Khan´s virginity from Dil Se, and it has been some time since cute, if rather boring Zaara, but Preity Zinta from Ishkq in Paris seems a completely different person. Badly styled, she looks even older than she actually is (and the very much obvious plastic surgery makes things worse). She is supposed to be under 30 in the film, I gather, but everything she looks is nearly desperate and not convincing. Much like SRK in Jab Tak Hai Jaan, Preity in this one should have just embraced her age, and perhaps turn it all into a more mature love story.

Isabelle Adjani, an acting LEGEND of French and world cinema, is given a raw deal. I cannot phantom what made her give her a nod to the film (maybe Shekar Kapoor, making a blink and miss cameo near the end?). In any case, apart from having nothing to do, she also gives a very awkward performance, being dubbed into Hindi all the way through. And her plastic surgeries make her, ironically, looking younger than Preity. But for me she is forever the ill-fated La Reine Margot, splendid, wonderful, timeless. 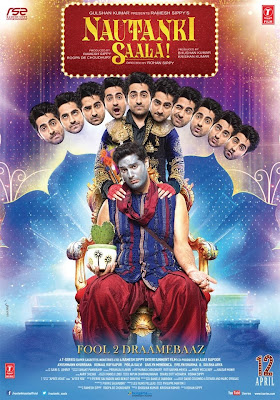 Not too long ago Sonali Bendre said she is not vying for lead roles since quite often the most interesting part is of somebody else in the film. While I sense Sonali might have said that simply because she is no longer offered lead roles, there is some truth to her statement and Nautanki Saala is a clear proof of the same theory. After winning accolades and hearts as Vicky Donor, Ayushman Khuranna was one of the most watched out for newcomers. Sadly his second big screen venture did not really go according to plan at the box office. And you can´t really blame the audience. People do not buy tickets to the bored.

A successful theater actor and director RP saves an unknown young man from commiting suicide by hanging, and to prevent him from trying again he takes him home, thinking everything will be fine by morning. However Mandar – the saved one – not only has no interest to move on from the tragedy that struck him (girlfriend challi gayi. Blah. And here I was rooting for something really depressing), but it also turns out he has nowhere to go, nothing to do and basically actually is as useless as he claims to be. RP is determined to help, much to the protests of his girlfriend, who, unlike him, can see Mandar for what he really is – a whiny baby, selfish and absorbed in self-loving. RP gets him a job in the theater (and as a lead actor in his own play – talk about confidence) and lets him live in his own flat. After a while even he is tired of Mandar, who is failing in every single department of life, and decides to put him and Nandini, the girl behind the suicide, back together. But dil to paagal hai and RP falls for the girl himself....

It all starts on a rather promising note. The first twenty or so minutes I found genuinely funny, but after it starts slowing down more and more and more.... so after what feels like an eternity, during which your head keeps dropping and eyes keep closing, you FINALLY reach a climax, that just happens, no explanations needed apparently. The greatest flaw (if you have not noticed from my complaining already) is the snail speed, which result in excrutiatingly boring wait for things to move on. Considering the running time is only 2 hours, this is just unforgivable. While it was really funny in bits, the boredom ultimately overpowers all.

Ayushman was my favourite new comer last year, but Nautanki does nothing to support my liking for him. He doesn´t really have that much of a role when I think about it, does not go through any development as a character. As I have mentioned above, he is a lead, but everybody else is more interesting. Kunal Roy Kapoor looked extremely ...... dirty and sleazy. And Abhishek Bachchan´s appearance is one of the most lukewarm cameos ever. Even the music is average - with the exception of So Gaya Yeh Jahan and Dhak Dhak, which are both just copies, and now even incorporated in the film. Waste of time, really.
Posted by Gaja Gamini at 20:33 1 comment: