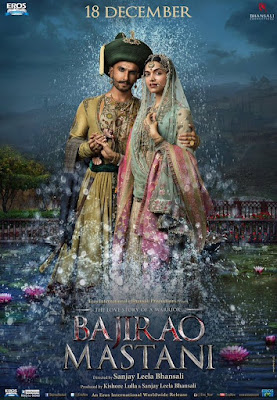 Khamoshi – The Musical made me cry my eyes out. Hum Dil De Chuke Sanam was just too well made. Devdas is forever engraved in my memory as one of the most powerful cinematic experiences of my life. Black was intriguing. Saawariya magical. Then game the bleak period of Bhansali films with what I felt was pretentious and half-baked Guzaarish and over-sexed and nonsensical Ram Leela. With Bajirao Mastani the director with a fetish for bling and drama returned to the path I would be happy to follow as a viewer. Bajirao Mastani is a culmination of many dreams and efforts, and certainly a story worth telling. Bhansali did not create anyone´s biography or accurate historical epic. He captured the parts of the real history that are etched in human memory as legends and myths, those parts that we can understand in spite of the ever growing time gap. Perhaps we no longer understand the politics, that is a mere background setting for something much more intimate, but we will always understand love.

Bhansali reaches for inspiration to Mughal-E-Azam and does not try to hide it. The mirror hall and the garden where Mastani performs her dances may as well be those in which Madhubala as Anarkali twirled elegantly some sixty years ago. And the theme of overwhelming, all-consuming love leading to ruin and madness had always been something the director has been into. The characters and the actors are well blended, the roles wonderfully executed, yet the writing leaves space for improvement. It is not difficult for me to believe Mastani loved used metaphors and poetry often, but in the film every line from her lips is a complex artistic composition with hidden meaning. That, I believe, is why some people found Deepika Padukone lacking in perfection in the role. In my view she was very, very good, but the writing made her speech seem artificial.

Finally, Deepika is not the best actress in India, yet for the role she was well suited. Convincing in fight scenes (if only she had been in more!), subtle and dreamy when in love, graceful (though not technically perfect) while dancing, with fire in her eyes when confronted, she also possesses that certain air of being the Ultimate woman in the story. It was not difficult for me to see why would Bajirao forget the lovely, faithful and docile Kashi for the fascinating Mastani who better matched his own personality. I liked how Mastani strove to get what she wanted and believed to be hers. But why did Mastani came to Bajirao´s home with only one servant and did so little to let Bajirao know about her being present at all? This bit made little sense to me.

Ranveer Singh washed away all the excess oil from Ram Leela and Gunday (thank God), and gives his best performance yet. The energy and force seem to surge through him, there is a slight hint of arrogance and later his desperation over the whole situation he created makes him both frightful and pitiful. The interaction between the two leads is more mature in Ram Leela, and even without crawling over each other in every moment available they come off much more in love here. Few happy moments for them would have been nice, but probably stretching the movie would not have been a good idea. Priyanka Chopra as Chandramukhi Kashi, the „other“ woman, is as fine as she can be. The hurt, the disbelief, the denial, the acceptance and silent suffering, everything is mirrored clearly in her expressions. From the supporting cast Tanvi Azmi as Bajirao´s mother impressed me the most.

I think my only major complaints would be a) lack of Mastani action in the second half b) non-memorable music with the exception of Deewani Mastani and c) the lack of closure to the story. No matter how passionate and overwhelming, the love affair of Bajirao and Mastani was not their own matter and the whole mess it created encompassed many other people. Even after the lovers die the story has loose ends and Bhansali leaves them hanging without a thought. In the very least what thereafter happened to Kashi and to Mastani´s child should have been mentioned. In Devdas the abrupt end and fade to black felt right, but even though the director was aiming for the same escalation of the momentum here, with Bajirao putting the last of his strength into a fight with demons only visible to him, the effect, though felt, is not of the same level. And I also hoped Mastani would die of something more palpable than a broken heart. Perhaps I have grown old and cynical?

In the end I can only say this is a movie I will certainly watch again. There are not many films like that, certainly not in Bollywood. Mughal-E-Azam it´s not. But deserving appreciation and some love it is.
Posted by Gaja Gamini at 16:27 No comments: