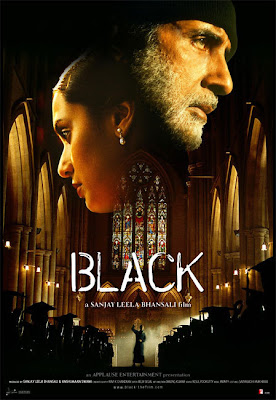 What comes to your mind when somebody says „black“? For me it used to be just a colour that helps one to look a bit slimmer, a colour of sadness, a dumb colour without a feeling. But now, now it became a certain space, which is calmingly empty and quiet, and at the same time filled with something wonderful but not yet seen. What caused this change in my perception was „Black“. Once again Sanjay Leela Bhansali had to face the negativity because many people didn´t like the fact he doesn´t make films out of completely original and new scripts. But in my opinion it is not the main storyline, which makes a good film-maker, it is the way he (or she) perceives the plot and hoe he presents it to others. And Bhansali may not be the original source of the tale, but he is possibly the best story-teller out there.

This time he decided to tell a story of a blind and deaf girl and her teacher. The inspiration for him was the famous history of Helen Keller and Annie Sullivan. In a way the film is a tribute to these remarkable women, as well as all blind and deaf people and those who help them find a way from a world that is black. Because after all, everything starts in darkness...
When she was a little baby, Michelle McNally just barely survived a severe illness. As a result she is deprived of seeing and hearing. Her loving parents are desperate, completely oblivious of what to do. Her mother refuses to admit her into an asylum and is determined to take care of her daughter herself. But how to raise a child who has no normal way of learning about the world around? Who does´t understand that everything has a meaning, a name. And so Michelle is growing more like a wild, uncontrollable animal and every day is a torture for her and her parents. After she nearly kills her baby sister, not even remotely realizing it, her father, whose grief turns into an unending frustration, is finally determined to send her away. Her mother begs for one more chance and this time she decides to call upon a special teacher for now eight-years-old Michelle.
Enter Debraj Sahai – a very unconventional (to say it mildly) teacher, who likes to drink, and who likes to create an image of a „magician“ in the eyes of others, because he is one of the few who really can break the black barrier into the world of deaf and blind children. In a very short time he becomes nearly obsessed with bringing Michelle out of her solitary, savage existence, but his harsh methods and stricktness meet with a great disapproval of Michelle´s father, who, after a while, asks Debraj to leave his house. But Debraj, knowing Mr. McNally is traveling for some time, manages to convince his wife to grant him more time with Michelle. 20 days pass and the girl shows no real progress. Debraj is running out of time, and if something doesn´t happen soon, not only he will be defeated, but Michelle will stay a dumb, wild and violent creature only outwardly resembling a human being.....
Black has a story as powerful as you can only wish. It is sad, and yet it leaves one with a feeling of something beautiful. It is a film that gives you something, enriches you. And it proves again, that no matter how spectacular and captivating the visuals are, what matters most in the end is the story. Yes, yet again Bhansali presents us with a stunning world full of unrealistic beauty. It is much more subtle then spectacular Devdas and is free of any blue extravagance of Saawariya, but still it pleases the eye and the visuals, sometimes even reminding medieval Gothic style, are as much part of the narrative as the characters. In Bhansali´s world everything finds its place and only all that together can create the final picture. A question where and when is this story taking place might cross your mind, because one cannot really tell from just looking, but in the end it is irrelevant – because even knowing when and where does not hold any importance to the story itself.
Emotions are real. Anger is not over the top even at its utmost, love does not need to be put into words, and tears that he brings into your eyes are not a "duty" like in for example Chopra/Johar films. What I find incredible is how Bhansali exactly knows what the actors are capable of. He is a person who showed us brilliance of Aishwarya Rai, the intensity of Shahrukh Khan, the depth of Madhuri Dixit´s talent, he even made Sonam Kapoor act decently (!!!). And this time too he shows us the strength of Amitabh Bachchan and Rani´s unbounded versatility. These two actors, Rani in particular, made the film what it is. If there are any two actors, not paired as a romantic jodi, whose mutual interaction I absolutely love, it is Rani and Amitabh. The two of them almost seem to have some deep understanding, perfect timing, and in a strange way also intense chemistry. They are great to watch on their own, fascinating to watch together – be it here or even in such a mediocre flick like Baabul.
All the other performances were nothing but amazing too. I was literally blown away by little Michelle played by Ayesha Kapoor, and when Rani continued to present the character after her, it was all so beautifully seamless one couldn´t help but wonder! Somewhere along the line I also couldn´t help but to compare the film with Bhansali´s yet latest movie Guzaarish (2010). The two definitely start with the same atmosphere. But where Guzaarish fails in charming the viewer, Black works magic. Where Ethan wants to die, Michelle unendingly searches for light.

Black is definitely a modern day classic.
Posted by Gaja Gamini at 14:36