Second by second Chikni Chameli has made its way to the public. An item number meant to spice up the upcoming Karan Johar´s production Agneepath, it is going to fully rock the screens early next year. After Sheila and Munni in 2010, that both enjoyed huge popularity, 2011 seems almost bare without it sown iconic item number. Sure, there were at least three attempts – Deepika in Dum Maro Dum remake, Yana Gupta gyrating her hips and looking rather sickly in Challo Dilli and I think I´ve heard something about „Shallu“ - but have not seen the song or the film... The fact remains 2011 was rather uneventful for Bollywood in general, and considering it´s BOLLYWOOD I actually did miss dancing in films. 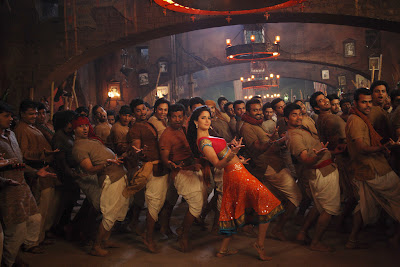 I never would have though I would be thanking Katrina Kaif for reminding us that dancing is actually an essential, and one of the best parts of Indian cinema. Her Sheila was a well-shot video, but there was not much of an actual dancing. However promo of Chikni Chameli promises to be better. It leaves behind the Sheila image and actually is channeling Munni! The rustic look, play of colours (Katrina in bright shades of yellow and red while everything else is brown), chest and torso thrusting back and forth.... The choreographer is Ganesh Acharya, out of whose work so far I´ve only liked one song – Badi Mushkil from Lajja – and that was no doubt because of the dancer more then the choreography itself.... Chikni Chameli has some moves that looks plain weird at first, but after few rewatches become to seem rather cool – and probably a signature movements as well.

Katrina has apparently worked really hard. She may still be a below average actress, but she is a fairly good dancer, definitely one of the better ones in Bollywood of today. She looks beautiful in the song and what gets her few more points is the fact she also improved her expressions. The quick editing and change of camera angles also ads to her efforts. Another pleasant point – though Katrina is presented in a very sexy way, one does not get the slightly awkward feel Sheila Ki Jawani caused. Chikni Chameli is a bit naughty, but I don´t think it´s degrading women in a way Sheila did. True, Chameli is apparently lighting up cigarets with her hotness, but it´s nowhere near the drooling sleazy director in Sheila.....

What puzzles me however, are statements like „Katrina dances like no other actress ever has“, uttered by people like Riteish Deshmunk and others. Makes me wonder if they have ever watched any Vyjayanthimala film. Or Madhuri. Or Sridevi. Or Meenakshi Sheshadri. Or Hema Malini. Or even Aishwarya and Rani. Katrina is no way on their level of dancing and I can only forgive comments like that thinking it´s the excitement over something new (and for a long time un-seen).


UPDATE aka how I was forced to change my mind. Read about it in my film review: http://bollywood-ish.blogspot.com/2012/04/agneepath.html
Posted by Gaja Gamini at 10:22