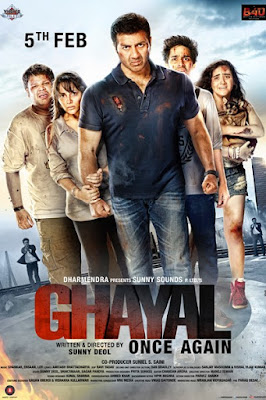 I freely admit I was surprised.... or better to say SHOCKED at how much I enjoyed this one and how good it was. Funny thing is I remember liking Ghayal, but before I watched the new film I had to re-read my old review and watch several scene on youtube, for I admit the film did not stay in mind too much. With memories refreshed and the mood set, I dared to follow Sunny Deol down the path he so often trips on....

What I liked about the movie was that it truly was a sequel: drawing the basics from the original, not erasing them, not altering them and most importantly not rehashing them. Ajay Mehra has the same anger that drove him through the first Ghayal for his Filmfare trophy back in 1991, he gets emotional over his family and he has also not come out of his previous ordeal unscathed or healed. Not wearing the load of troubles on his own, Sunny Deol is ably helped by four young protagonists. These young ones manage a difficult task of winning you over in a very short time and without much of an introduction. What truly made me sit with my eyes glued to the screen was everything in between the start of the mad chase through the shopping mall practically to the big "characters are related" twist. Revelation of one of the girls being Ajay´s daughter was fine with me, no matter how filmy.

However right after that there was the CGI helicopter doing very un-helicopter-y things and shit, and it nearly completely destroyed any believability factor. But truly, Ghayal Once Again is fast-paced, straightforward and thrilling. Since none of the four young people is a "hero" or "heroine", you cannot predict whether or not they will die/be captured, and the scene in which they are desperately running from the bad guys, getting injured and severely hurt in the process, taxed my nerves quite a bit. Their pain also seemed so real I kept shedding tears from scene to scene, an occurrence quite rare in "let´s beat the shit out of the evil ones" kind of films. Even Ajay Mehra himself is not above pain and injuries. It was good to see flashbacks to the original films, including the lovely Meenakshi Sheshadri, and I had to wonder why the makers did not take enough trouble to even get her to redub that one dialog which is used.

As for the rest of the cast, the ever reliable Om Puri returns, and Soha Ali Khan reminds us she exists. I was relieved that any romantic angle between her and Sunny remained unexplored, indeed the relationship is presented in a way they may truly be just very good friends. If there is anything Sunny needs to stay clear off it´s romancing anyone under the age of 45 (I Love NY still gives me creeps and nightmares). Narendra Jha as the main villain is cool, ruthless and calculative, yet not above fear and other human emotions. He does a commendable job.


I am not a huge fan of Sunny Deol, but once in a while he comes up with stuff that makes me believe he is greatly underrated today. I had little to none faith in this project, but Sunny pulled it off more than well. Ghayal Once Again easily ranks among the better, if not the best, sequels Bollywood has churned out in past ten years.