Rocket Singh: Salesman of the Year 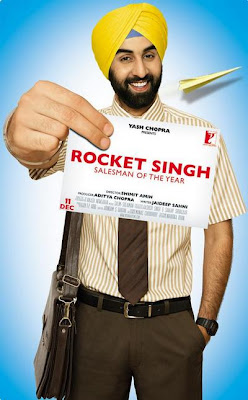 Say what you will I´m pretty much convinced Ranbir Kapoor is the future superstar of Bollywood. And that a superstar with great acting skills and killer charisma, as well as a good script sense. Rocket Singh is not a blockbuster hit film material, yet it doesn´t take away the fact it is an interesting an unusual film, especially if you realize it is mainstream Bollywood.

Harpreet Singh Bedi, a fresh graduate, is full of optimism as he decides to start a career as a salesman. He believes he´s got what it takes. He knows how to talk to people, he knows how to convince them, he has enough of tact and diplomacy. And he is not affraid of working hard. What he does lack though is ruthlessness and most importantly the ability to adjust to the world of sales, where corruption and bribes are a daily bread for everyone in the business. Except him. Brought up by a righteous Prem Chopra, the Sikh Harpreet refuses to fall prey to the tricks and although it earns him more trouble than anything he refuses to play according to the accustomed rules. He is determined not to let go of his purity of conscience.

Finally after taking a lot of humiliation and other crap he decides to create his own company – Rocket Sales Corporation. One by one, several other employers are convinced to join hands with him and they create a truly unique bunch of people – and all including a chaaiwalla have an equal partnership. And their company doesn´t take bribes. And they always solve everything quickly and without delays, charging nothing extra. In other words Harpreet manages to run a flawless, almost utopian company – and all that in absolute secrecy. But nothing lasts forever and eventually people who have been loosing clients to the mysterious Rocket corporation find out the truth....

As a Ranbir Kapoor fan I feel proud of the boy for choosing such a film. And he performs with complete dedication. He is one of the few who do not let their off-screen image and persona meddle with his work and as a result he becomes one with the character. Indeed, I would say that during the five years he´s been in the industry he has shown a great versatility, surpassing even older and more experienced actors. Others fit their roles perfectly as well, and all together create a convincing picture of human nature. What needs to be appreciated is that even though Ranbir Kapoor is clearly the only star in the movie, no character is wasted.

The film is (apart from being an unashamed turban porn) a surprisingly realistic take on office life and relationships between bosses and employees. In a way it is one of the „follow your dream“ stories, but without melodrama and seen without pink glasses, and the troubles go beyond disapproving parents and nasty evil characters. Of course the very end is happily ever after one, but that is all. Entertaining is not the word to use here. The film is slow, especially in the first part before everything starts falling into place. I can imagine why the film did not really click at the box office, it doesn´t make for an exciting cinema watch, but it is perfect if you want to indulge in some thinking and musings about possibilities as you are clutching a cup of tea, resting on your sofa.