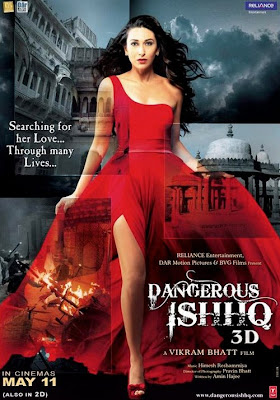 I had severe reservations right from the moment I´ve heard the atrocious Hinglish title for the first time, but for the sake of Karishma Kapoor, whom I don´t see among the greatest of the great actresses, but still love her well enough for the intensity and experience she gave me with Zubeidaa and Fiza. And it was for her sake again that I managed to sit through the film, that turned out to be the two possibly longest hours of my life. I guess that seals her presence in the list of my favourites forever.

Karishma, looking stunning and not a day over twenty something (and better than many younger actresses), plays a supermodel Sanjana, whose really unattractive and absolutely non-leading-hero-material-ish boyfriend just got kidnapped, and since true love knows no bounds Sanjana plunges into the whirphool of thrilling situations that are not at all exciting, dangerous stunts and special effects that look like from a 90s gameboy, and enthralling past lives memories that are badly edited and badly placed. There is no shortage of some hardcore magic either – which however ultimately moves the film to a level of bad fairytales for adult people. On her search for her lover Sanjana starts seeing visions from her past life, and as it turns out few regression sessions later, her love life has always been totally screwed up by somebody else in all her births. Ultimately she finds out that once upon a time she refused a rich guy obsessed with her, and through some divine powers and abracadabra the whole ever repeating cycle of her lover (and herself) dying a violent death thanks to the refused guy started. Once she discovers the person in this birth, she finally can put an end to it.
What needs to be appreciated is that whilst dealing with the ever-popular reincarnation theme, the film´s premise and the way the past lives are explored is definitely innovative. At the same time, sadly, none of them is presented well enough for us to connect with them – or the characters. All the timelines had great potential, and although the 16th century one is generally agreed upon as being the „best one“ shown, I must say I was only really touched by the 1947 one, showing Karishma as a Rajastani girl on her fearful and futile flight from the awaiting death. Alas, it was criminally short, and all too soon I was thrown back into the dullest timeline of all – the present time one, which not only bored with the lack of good cinematography and cheap special effects, it also has Karishma being completely dull and without that intensity one associates her with. She seemed extremely half-hearted throughout. It doesn´t help that in many scenes she literally has nothing to do.
Jimmy Shergil and Divya Dutta did well, and I even dare say Divya was the show stealer in all the scenes she had. Others are not really worth a mention. The casting of the male characters was mostly wrong. I have already mentioned the main male lead being completely unfit for the part, not only because I personally find him difficult to look at, but because he and Karishma share zero chemistry. Dangerous Ishq was promoted as a female centric movie, but it is far from being one. If anything it had a great potential to be an epic love story (if everything from script to direction was handled better), but to feel a love story and root for a couple throughout a movie you need to feel their connection, and here there is nothing but more dull dialogues. It was interesting to catch a glimpse of once so promising Gracy Singh as Krishna´s worshipper Meera, a character shown a bit loony really, but not without a certain charm.
And a girly complaint of mine – considering she was a supermodel, I expected to see some seriously awesome outfits, however on the costume level the film seemed terribly cheap. Music was good, very good actually, and could work as an album, it doesn´t seem appropriate for the movie though and the director let go of an opportunity to create some memorable picturizations, that possibly might have made us see some real feelings between the leading couple after all. The film was also released in 3D, something completely unnecessary and not bringing any betterment to the final product. I can´t see the point of it at all.

Dangerous Ishq remains a film of possibilities untaken, and would work better as a TV miniseries than a big screen picture. A movie about past life regression, that actually gave me a feeling that not the character, but I am in the past, lost somewhere at the point where Bollywood heroines were made to stand around screaming their boyfriend´s name while those fought valiantly against the villains.
Posted by Gaja Gamini at 22:19