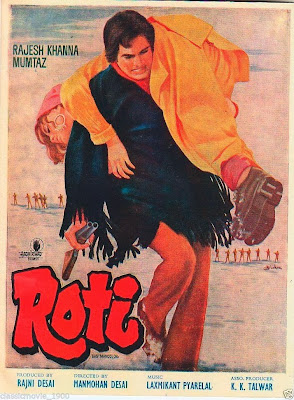 Once upon a time, there was a little boy from a slum, who had to slog and yet went to bed hungry. And seeing all the injustice in the world he became a criminal to ensure his survival. Two lines that could start describing about a million Indian films. Some used it as a background idea, many used it as the main motivation of the characters. Some were brilliant and some did not work, and even though Roti has apparently been appreciated at the time of its release, I don´t think it deserves to be anywhere near the top when it comes to a list of such films.

After escaping from jail and being considered dead, Mangal (as Rajesh is called) decides to lead a different life. He ends up in a small mountain village, where posing as a friend of their son, he finds a shelter with blind aging parents, acquires the position of a teacher in the school, romances Bijli (Mumtaz), saves prostitutes and turns everyone „human“ (because who better but a guy running froma a police for that job, eh?)

Rajesh Khanna wearing hippie shirts and awful mullet tried to persuade me he is both a wanted criminal and Jesus in second incarnation. Needless to say he looked unconvincing as the first and annoyingly pretentious as the latter. He did not act badly, but apparently the magic of Rajesh Khanna for whom the girls were writing letters in their own blood does not work on me. I felt rather bored throughout, which is largely to be blamed on a script full of things I have seen a million times, and the never-ending message that resonates through Indian films since the beginning till today - about corrupt society and innocent children turned criminals. But Mangal is not just a small-time thief or a Robin Hood. He is a killer - and people are also killed because of him, without him ever caring. The story is told without getting some kind of emotion from the viewer, and the most engaging action is the God-intervention starring monkeys.

This is the first time I saw Mumtaz (well, not really true because I saw her previously in Suraj, but there she was just in a supporting role and completely lost in the awesomeness that always shines around Vyjayanthimala), and I liked her well enough. She had some spunk, even if at times her character was an annoying chatterbox. However a heroine whose only purpose is to fall for the hero, no matter how prepostrous the whole thing is, is yet another fail the film has. And sadly, she doesn´t even have a song that would be worth mentioning it. Oh no, all the songs are social-waking opportunities for our criminal-Jesus. 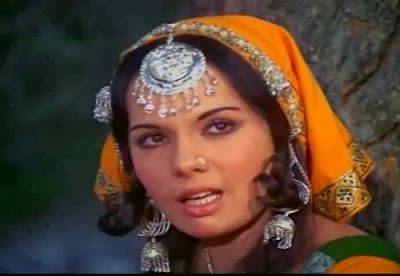 I understand why these films were and are still made. Because reality has not changed. But some films seem to be made just to be preachy, and end up being more of a boring lecture (with lack of logic involved) than an emotional experience that would actually make one sit back and think for a while, if not get up and doing something. Roti doesn´t do enough to justify the ways of Mangal. He keeps having passionate speeches about hunger and stomachs, but sorry, dude, you´ve been a healthy adult for long enough now and still you would choose stupid fight resulting in killing someone, then having people shot because of your pompous escape from the gallows... and I am supposed to feel your pain more then theirs?

The film needed a better editing too, as some bits seem to be left out (or I again got a copy with scenes cut). What starts as a tale of a hungry child ends in an amazingly unbelievable climax with burying your enemies under an avalanche, racing ahead of a police dog with Mumtaz on your back, having yet another damn long speech after being shot in the heart (and you blood evenly spilling into the part of Mumtaz´s hair – which totally beats the famous Mujhse Dosti Karoge sindoor scene), as the blind parents and their one-legged son obviously manage to hurry up (and be quicker than police and gundas in their cars) to mourn over you.