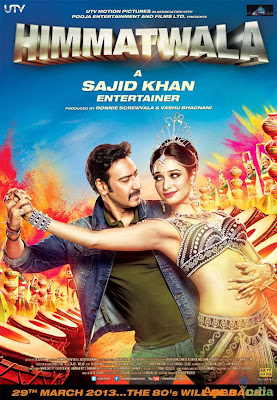 When I reviewed the famous (and overrated as hell) 1983 Himmatwala some time ago, I expressed a thought that any remake can only be better. I am not going to eat my words. At least not entirely. It is bad, quite bad actually. Maybe even as bad. But worse it is not. And frankly while it deserved severe criticism, I don´t think it was as horrible as critics made it sound. I don´t think they even try to be fair when it comes to Sajid Khan, who has never been their favourite thanks to his overconfident attitude that understandably rubs them the wrong way (me too, but he has yet to insult me personally.) In the end Himmatwala flopped – very much deservedly, but at the same time it is not the worst film of the year by far – something many have been trying to prove.

There are things that are different from the 1983 film (I don´t want to say „original“ since I am not sure it was „original“ - more like a remake of something too) and there are things that remain untouched. Unfortunatelly the elements Sajid Khan decided to keep are often what makes the whole movie seem regressive instead of initiating an avalanche of nostalgia among 30+ audience. And so a wife has to stay with her abusive husband, because you know – family honour! And evil women wear mini-skirts, so when they suddenly shift to sarees you realize they mended their ignoble ways. And an attempt at morally „right“ approach towards rapists may be understandable from a certain point of view, but again it is just violence and violence only. Threw in a gay joke or two, just to be sure you are funny. And if the audience did not get it, make it really obvious, that you are making fun now. 1-2-3-laugh!

I was glad that Ravi (Ajay) did not suffer from a memory loss, unlike his predecessor, and I liked how they changed his identity. Unfortunatelly Ajay Devgn may be a great action hero, but his attempt at comedy don´t go well. He is, much like Jeetendra, too old for the role, and if not that he is definitely too old for his heroine. Tamanna Bhatia, whom I really like and adore, have been making waves down in the South, but she is yet to make her mark on Bollywood map, and for her sake (and the fangirl in me who is ready to love her) I hope her next Hindi venture will offer her more scope. She does well in her small role, her expressions are delightful and she dances beautifully. Paresh Rawal in ridiculous get-up is not funny. And Zarina Wahab as the new-age suffering Maa has nothing on epic crying Maas of the past.

That the film is over the top, ridiculous and just full of loopholes goes without saying. Sajid Khan is hated by critics also because of making most ridiculous movies that, as many feel, are made to mock their intelligence. But my peeve against Sajid is a bit different: I don´t think he is a good story teller. Even simplistic, silly cinema can be worth your money if it keeps you entertained, but not this. Himmatwala is an example of lazy filmmaking, trying to ride the masalla wave, that, however, can only end up in a blind alley after a while.

The marketing line of „80s will be back“ did not lie, but who in the world wants Bollywood 80s back? It is actually quite depressing to think that 30 years have caused a very little progress in the minds of some people (quite a few people – Himmatwala may have fopped but it still earned around 60 crore). Oh - if you really want to see a hand-to-paw combat with a tiger, I recommend to watch the „rascalla“ scene from Om Shanti Om over this.