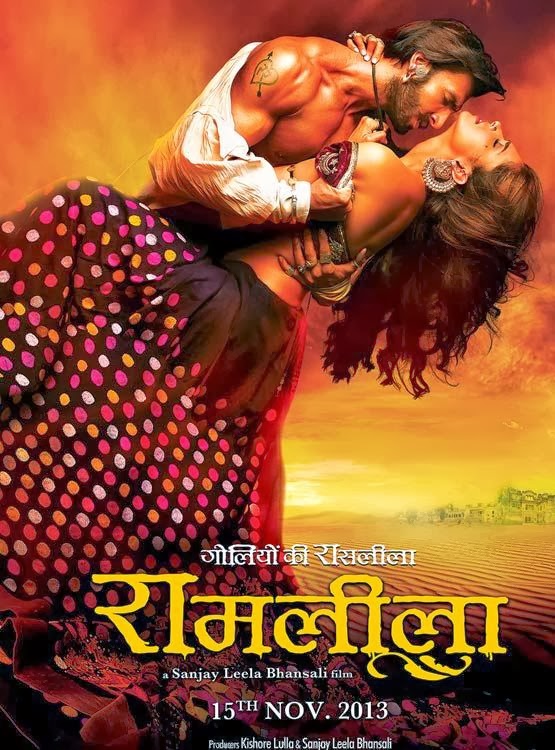 Does the world really need another take on Romeo and Juliet? Of course not. In fact after pure and precise adaptation by Zeffirelli from the 60s every new movie on the topic can only pass of as „fine“ at best. Still a prospect of the story adapted by megalomaniac of Bollywood Bhansali, who had previously given us some serious visual orgasms and basically drowned us in feelings (positive or negative), against Indian backdrop sounded deliciously tantalizing. Even more so since SLB´s last venture with Guzaarish felt somehow shallow and pretentious to me. I was hoping for the return of magic of Devdas (also a classic story revolving around self-obsessed people) or HDDCS but while I would rate Ram Leela above Guzaarish, it is still much weaker than all the rest of SLB films. I was also pinning my hopes to it as a film that would be THE film of 2013, only to be kind of let down.

Given I am not the greatest fan of the original story, it still cannot be denied that it was heading to somewhere following (even if naive and hormonal) basic logic and once it reached the tragic climax one felt for the two young people. Ram Leela could easily turn a teenage puppy love into a truly passionate affair, but ultimately the teenagers from Verona owned them. Lust at first sight that happens between oily, hairless Ram who dedicates a whole song to get dandruffs out of his baal, and stunning beyond words Leela is good and makes sense, yet everything that follows is just too quick. But to be fair, it doesn´t do THAT much of a damage. Yet. I was quite enjoying the story of two families who shoot at each other every day for centuries and obviously suck at handling the gun considering they never hit anyone. And when they do, it is by accident.

Up until the moment of Ram and Leela being found by their families and torn apart, the movie works. However after that to the very last minute there is not an ounce of common sense left. Ram becomes the leader of the family gang, yet does absolutely NOTHING to get to Leela, in fact he is not even answering her desperate phonecalls. Leela holds onto her logic a bit longer, but then looses it as well. The story reaches new heights of WTF with HER becoming the leader of HER family gang. But while both our lovers can weep their eyes out they decide to continue the mutual family slaughter. I did not understand who exactly they were fighting with. Ad to it extremely random change of mind that other pivotal character goes through near the end and you are left with your head hurting from all the shaking.

Not all is bad. The film is visually pleasing and the play of colours wonderful, be it the blue and white Holi or red and golden Navratri, also the use of different festivals to give the viewer sense of how much time has passed is skillfully vowen into the narrative. Music is appropriate and follows the story well (yet I expect more from SLB films after the gold that were Devdas and Saawariya soundtracs). I could have done without the forced Priyanka Chopra´s item number. Women in the film are all in the top form and it wouldn´t be wrong to claim the film belongs to them. Supriya Pathak is nothing short of amazing. She steals the show with her portrayal of Baa - and only looses breath near the end with her (already mentioned) nonsensical and unexplained change of heart, which takes away from the impact of her character – and also makes the uselessness of the final Ishaqzaade-ish tragedy all the more frustrating. Her scenes are intense and very well create an image of dangerous woman who is scarier than all the dudes running around with their rifles.

Deepika Padukone is looking beautiful and emoting beautiful. I loved that underneath the tough exterior there was really just a very vulnerable, yet determined creature. I wouldn´t say it´s her best performance, but definitely very good. She also emerges as a very capable dancer, oozing grace in Lahu Munh Lag Gaya and unbound energy in Nagada Sang Dhol, even manages to pull off the throwback into the 90s that is the only unfitting song Ishqyaun Dhishqyaun, suffering from Govinda/Karishma hangover. Finally Richa Chadda, with an air of mystery and looking positively gorgeous, deserved more scope and more stuff to work with. She is brilliant in whatever she is given. And even though minuscule, I would mention the subplot with Leela´s unwilling prospective groom among positive as well.

Turning our attention to somehow effeminate Ram, Ranveer Singh nails some of the scenes and disappoints in others (but yay to his dancing). He is very inconsistent throughout, going over the top quite a few times. It doesn´t help that he shares next to none chemistry with his Leela (somebody explain to Bhansali that eating each other´s heads every five minutes does not create an image of love or passion if you simply don´t have “it”). Romeo and Juliet is primarily a story about two people who cannot be without each other. But here the script has them separated quite early on and the relationship practically ceases to exist (???). Truth is because of all that I did not care for Ram and Leela as a couple.

Overal Ram Leela is an average fare. Not “bad” and not “good”. Worth a watch, if only for Deepika Padukone. It is getting more and more interesting to watch her evolving into a very fine actress. I give it „flawed but enjoyable rating“, even though I did not exactly enjoy myself.