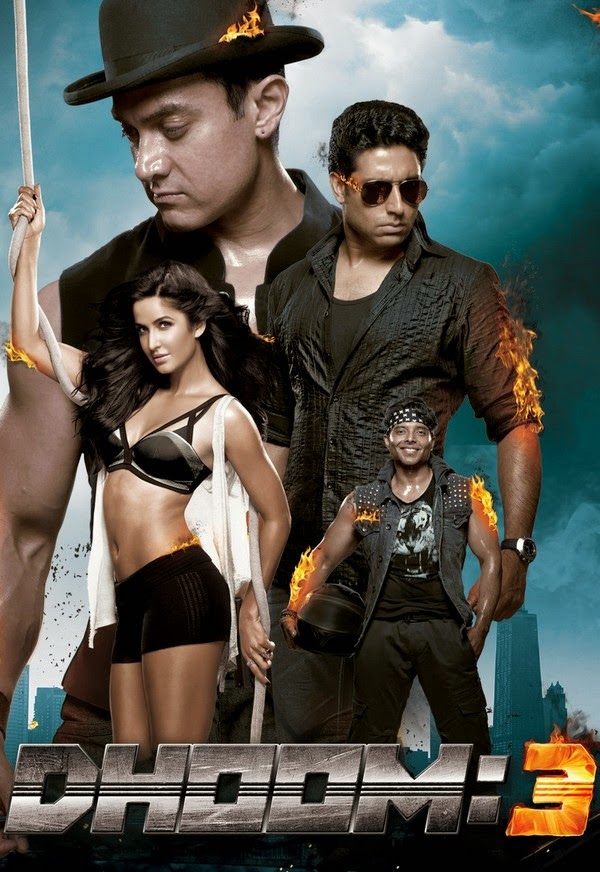 I feel that after this film I need to add one more word into my rating – SHITASTIC. Because that is the only way how to describe how awesome and awful Dhoom 3 is (maybe I should call it „awesful“?). I thought the first movie of the franchise decent, the second absolutely horrendous. And this one just bloody ridiculous. But given I had my brain boiled by intense studying and was in a desperate need of letting everything just go for a moment, I ended up enjoying this first class trash to the fullest.

First of all, I made a mistake listing the cast above. The correct order should be: Aamir Khan, Aamir Khan, supported by Aamir Khan, a bike, Aamir Khan, and some extras. What makes it a part of Dhoom franchise is not Jai and Ali, a duo of idiotic cops, but bikes doing mad shit and story so questionable you cannot take any bit of it seriously. It is not a masala film in that slightly rustic 80s style (that needs to die a quick death for the sake of humanity), it looks way more polished, almost slick, almost like a good movie. But then of course bikes ride on ropes and rickshaws break through numerous brick walls, and American police calls for help two of the most incompetent Indian cops who have screwed up every big case in the past. And by the time the big twist comes you have guessed already, but Jai Dixit has not.

Unlike previous Dhoom, which was just totally random, Aamir – as Sahir AND Samar, is given a backstory. All the silliness that happens has a certain motivation, which at least gives it a frame, that kinda holds it all together. There is no shit (am using this word often in this review, am I not?) love story that would make you roll your eyes and wish the lovers dead already. On the other hand it is all about robbing a bank and yet not once you see the bank robbed (huh?), but the makers try to make up for it with ENDLESS bike/car chases that always end up with Aamir´s magical bike pulling off some magic trick. The circus showed in the prologue (which interestingly feels like something from the 20s instead of the year 1990) provides just really secondary magic tricks (no wonder the bank was not impressed), the new circus Aamir launches seems to have ONE show number that goes on every night and forever.

Aamir Khan has a constipated expression as Sahir and his act as Samar is actually painful. The film entirely belong to him still, even if his bulging muscles make him move rather uncomfortably. Abhishek Bachchan sports a frowned brow and grim stare all the time, it is obvious the makers had no idea what to do with him. Any random cop could have provoke the exact same things from Sahir and the character of Jai is really no longer required. As for Uday Chopra, he is in because everybody needs a sidekick they can pester and Jai ain´t no different.

Katrina Kaif has about 20 minutes in the film (that already includes 3 songs). She fits the role. She is quite cute and no acting histrionics are required anyway. Dhoom girl is about sex appeal, good looks and glamour, all of which she provides generously, and for the first time ever I truly appreciated her dancing. She was REALLY good, and only few bits of choreography made her look awkward. Most importnatly her character does not refer to herself in third person (Sunehri was really pissing me off with this in Dhoom 2. Like who the hell does that?) It felt good to see Jackie Shroff in his cameo, he was reliable as always, although his character was one whacko of a „loving“ father.

Songs blend in well with the film – the best one by far is Malang. All that money they put into picturization definitely paid of. The number is SPECTACULAR and must have been amazing to experience on big screen. On the other hand Aamir Khan should apologize for that tap dance in the beginning. Camera work is beautiful, and the only technical aspect that was not up to mark were special effects. The amount of cars crashed and flying through the air must have made Rohit Shetty green with envy.

Dhoom 3 is definitely the best of the horrible franchise. It is awful but extremely entertaining. So bad it´s good. All glamour, no substance or logic. And apparently every criminal prefers to throw themselves off the cliff rather than be arrested by Jai Dixit.