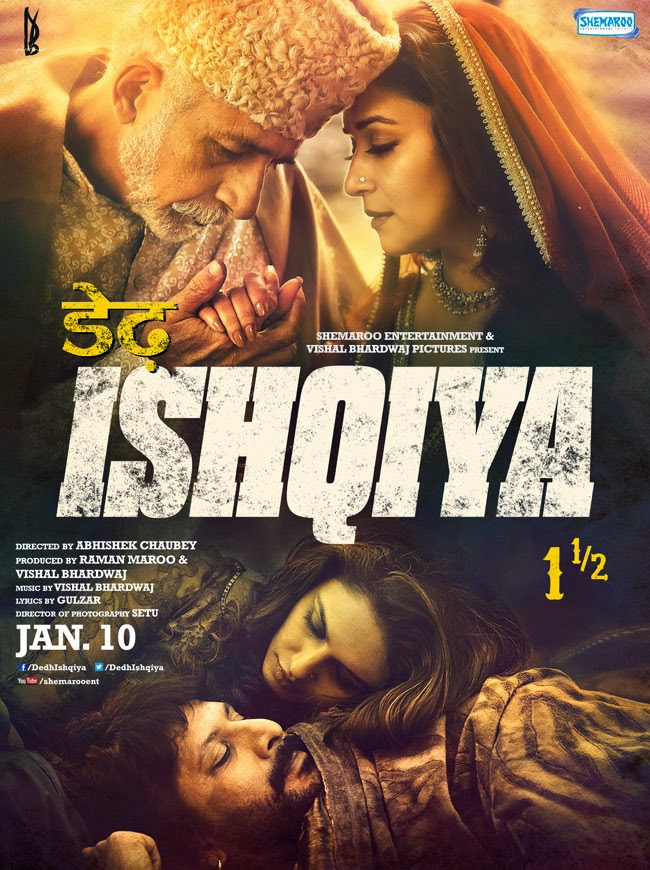 Dedh Ishqiya is a film that gave me everything I wanted. Everything I expect from a movie, that too from a sequel of a film I already like a lot. I have been waiting for it for over two years, anticipating it with bated breath, so brace yourselves because this is going to be LONG.

Ishqiya is carried forward as a franchise by the extremely loveable characters of Khalujan and Babban, a notorious uncle-nephew duo, with eyes always on some prize and constantly trying to escape their rishtedaar from previous film. However while it is their franchise, it is not their story. Much like we witnessed Krishna´s story (albeit through their eyes) in Ishqiya, this time it is another woman whose life, struggle and plans come into focus. Neither Khalu nor Babban changed since we last saw them. Khalu is still in love with the idea of love and Babban has not lost anything from his brisque nature. Naseeruddin Shah and Arshad Warsi are both great, great actors. Arshad has the advantage over other characters in the film because he is really the only one providing fun and entertainment through one-liners, which he delivers like only he can. Naseeruddin Shah delivers one of his best perfromances, and given his amazing record that is really something. Khalu with puppy-eyes and love-struck expressions is a sheer delight. He is still a crook, but he looses himself in love (and is happy to do so), more than he intended. He has stopped dying his hair, has accepted his age, and his affections are indeed deep, not a flying romance which he shared with Krishna.

But look for a woman behind everything, right? And this woman around whom everything is centered is remarkable. Now, we all know Vidya Balan seduced us one and all, men or women irrespective, with her earthy, raw sensuality. Begum Para seduces too, but through different means. Krishna from Ishqiya was real in every sense of the word. Begum Para seems to be from a different time and place altogether. As if she stepped out of an old painting, she carries herself with utter grace, refinement, class and distinct air of royalty. She seems an illusion the men are chasing wholeheartedly, and at the same time, as you wander through the haveli corridors in day time, it turns out the picture she gives to the outer world is a lying image, put up for the sake of mere survival. Unlike Krishna, Begum Para is not a deserted woman set after a revenge. And she does not need to sleep with anyone or lick their fingers to have them eating out of her lily-white hand. Her one look is enough to set hearts racing, as she possesses the aura of being above mere mortals and almost untouchable. She knows she has these qualities and is aware of the effect she has on people, and yet, at the same time..... she is a child in her soul. Crippled by past experiences, suffocated under the royal title and slowly dying on the inside, trapped in the enormous palace. Dedh Ishqiya heroine is just as exciting, and even more complex than Krishna, even though she is created from a different mould altogether. She too is unpredictable and unreadable, but that is where the whole similarity stops.

If one expected a shrewd, scheming woman using her raw sex-appeal to get what she wants, Begum is not it. However Muniya is. She fits much more into the expectations people had if they approched the sequel with a pre-conceived notion of how the characters are going to be. Huma, arguably the most talented actress among the current new lot, plays her role of Begum´s close confidant with ease and conviction, and she is not at all lost beside other, much seasoned actors. Huma looks gorgeous and one can feel the energy and vivacity radiating from her. Her diction is wonderful. Not even her hairstyle can compete with the one the excellent Vijay Raaz is sporting though. In a film where everybody chases their own agenda he is no less and no more ambitious and sneaky than Khalu and Babban, making Dedh Ishqiya truly a story where there are no heroes and villains, just self-loving people who work towards their aspirations.

Dedh Ishqiya is a cinematic triumph in many ways, and one of them is the characters. This is one of the rare Bollywood films in which all of them are multi-dimensional, needed for the progress of the story and to drive the plot. There is no place for superficial rubbish.And all the actors involved are so massively talented and click so well together it just doesn´t feel correct to dissect the scenes for the sake of bringing somebody up or down. They are all needed, they all deliver and in the end the FILM is more important than any actor. And it works.

It wouldn´t be Ishqiya though, if love did not get in a way. And there is way more love than in the first film. Between more than two people. More than three. More than four. Dedh Ishqiya is just love, in many forms, with many faces, of different motivation and springing from various roots. The chemistry is at work between all four main protagonists, but interestingly Babban/Khalu and Begum/Muniya have better chemistry together than opposite each other. Babban and Khalujaan are indeed one of the most loveable „bromances“ I can think of, up there with Munna/Circuit, Karan/Arjun, „Shashitabh“ in most of their film and Anil/Jackie in everything they ever did together. They are comfortable with each other and it shows.

What is much more rare and actually made Dedh Ishqiya so special was the bonding between Begum and Muniya. I have not seen two female characters being so close and in such a tight-knit relationship in a movie ever. At one point Begum adresses Munnia as her “dost, behen and jaan”. And there are more hints on what the relationship is actually about. The possibility that they MAY and MAY NOT be homosexual is enthralling. Munnia is Para´s „jaan“? We all know this word can be interpreted in more ways than one. And perhaps it is innocent. Perhaps not. It depends on the viewer, who can freely choose what they want to believe. And if indeed they are supposed to be lovers, then it is the most subdued, tasteful portrayal of such situation on the screen in Indian cinema. Nothing about it is in your face or riding on stereotypes. Even their prospective grooms are shown to be in awe and actually turned on by what they discover, rather than be disgusted and use it against them.

There are flaws. Minor ones, truly. The second half is rather slow, at the same time I cannot imagine any scene missing. Jagave Sari Raina dance number happens quite all of a sudden and out of nowhere, a bit more of a build-up would have made it even better. The song is gorgeously choreographed and executed, giving us even a flashback bringing us closer to understanding the backstory of Kahlu and Bagum. I definitely felt more should have been said about it. How close they were? What happened to them really? Why was it her specifically that Khalu set his mind upon once he realized he wanted something in life for himself? Was she his first love? How did he find her? Or was he keeping eye on her throughout the years? Too many questions to be asked.

Musical score is beautiful. I love the whole soundtrack, with qawali Kya Hoga taking the cake for the best song. And lyrics... Oh the lyrics! If we forget the Horn OK Pleaj track, it has been a long long time since such gorgeous and meaningful lyrics have sounded through cinema halls. Gulzar Saab penned down some of his best efforts for this movie. The background score is hauntingly beautiful and truly underlines the atmosphere of some of the scenes – Begum´s entry being one of them. It takes a little while before one gets used to Rekha Bhardwaj, but then the effect is wonderful.

Dedh Ishqiya can also boast of great dialogues. From Babban´s hilarious one-liners, his attempts to woo Muniya, Khalu´s elaborate poetry and all the lines Begum presents with her impeccable and unmatched dialogue delivery, the film is a language festival, Urdu in particular. Even I, though not familiar with it much, was smitten by how sweet and beautiful it sounded.

To me the highlight of this fantastic film was Begum Para, brilliantly brought to life by Madhuri. Perhaps it is because I simply notice her more, then again there is reason why I consider this woman my favourite actress and she re-assured me I am justified in that opinion. And I am proud of her, because Begum Para is a role not everybody would or could do. Begum Para is not a Miss Goody-Two-Shoes. She is emotionally, possibly mentally disturbed woman. She is not interested in love, and of course there is the already mentioned homosexual colouring. Add to it you have to share screenspace with twenty years younger and fresh power-house of talent Huma Qureshi in most of the scenes. In her 30 years long film career Madhuri has given us some truly inspiring, strong characters. Independent and fierce women. Begum Para has something I don´t believe I have seen in any other of Madhuri´s roles – she is extremely frail and fragile. She is vulnerable. For all the plotting and mystery she has gentle innocence in her eyes. She projects such a feeling of helplessness and desperation one just wants to cuddle her up and comfort her, protect her from the realities of the world – and that we love Muniya for doing just that.

Be it Para who is furiously scratching her own face out of old pictures or Para who in matter of seconds transforms into a seductive temptress, Madhuri plays the role to perfection. Her skin almost changes colour with the mood she portrays, she radiates warmth one moment and it is completely lost in the next, her expressions are lucid and clear and beautiful. And her dialogue delivery yet again flawless. Finally, this is a woman in her 40s, shown as extremely desirable, a central piece of the story, and both she and Muniya make for some of the best feminist characters in recent times. The world of Ishqiya is unique because it shows that WOMEN ARE PEOPLE without need to call anything female-centric and flaunting any such „progressive“ tag.

And so a complaint of mine would be we did not seen nearly enough of her in the film. The screentime is distributed amongst all the actors pretty evenly, which gives them all their chance to shine, but ultimately takes away from the most interesting person of the story. I desperately wanted to know more.

All the bias of mine aside, Dedh Ishqiya is not a flawlessly sculpted film, but that doesn´t take away from the charm it possesses and the story stands pretty strong. Dedh Ishqiya is a celebration of acting, of chemistry and camaraderie, of language and classical dancing. A strange, captivating atmosphere breathes through the film, showing a world where time had stopped, and while some want to rule it, others wants to be free of it. Dedh Ishqiya is witty, entertaining, clever, sensitive, original, better than in predecessor and for me as a woman extremely satisfying. Dedh Ishqiya is important.