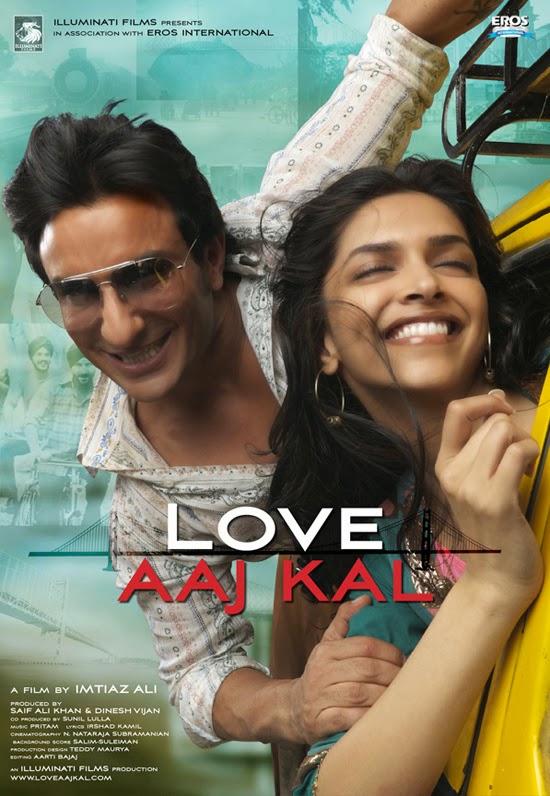 The story may not be great and performances of varied quality, but there is something lyrical about Imtiaz Ali films, which makes them an enjoyable watch, even if only once. Love Aaj Kal is the least emotional of his movies, least complicated, not reaching the amazing entertainment offered by Jab We Met or even emotional wreckage of Rockstar. But it has its share of charming moments and overal is a pretty, pretty picture, using flashbacks very well, without confusing the viewer, and heightening curiosity as the story goes on.

We are given a glimpse of „modern“ and „cool“ relationship between architect Jai and art student Meera, who have great time hanging out together, all on the backdrop of London. Jai, who is really the one carrying the narrative and the story unfolds from his point of view, considers romantic love an old-fashion concept, and when Meera is offered work in India, he very sportingly supports her to leave him, breaking up with her on friendliest terms possible. How very modern and cool indeed. However as the time passes by, he notices his sloppy attempts to move on are all destined to fail. And being constantly nagged by an elderly restaurant owner, who paints in front of Jai his own story of love he had once lived, Mr. Architect is quite shocked when he realizes Love has probably happened to him. Unfortunately it seems Meera actually did move on...

Deepika Padukone does not have much to contribute to the movie, aside from her utterly gorgeous face and drool-worthy wardrobe. After getting used to her very much exciting self from the last two years, I was actually surprised to revisit the somehow awkward, extremely camera-conscious Deepika with pitiful dialogue delivery (which has so evolved since then!). She doesn´t ruin the scenes she´s in, but the director very wisely let Saif Ali Khan do most of the acting instead, giving him most of the dialogues, and so our dear nawab goes on like a chatterbox, rarely stopping an endless flow of words whenever he is nervous or emotional. Sometimes his monologues actually get so long you wonder if Meera´s turn to talk would ever come (and sometimes it really does not).

The most charming bits of the movie, however, are introduced to the viewer by Rishi Kapoor and his narration of the old-school love story several decades ago, in India. The warm, brown colouring of all the scenes in the „past“ gives them a unique mood, very different from the rest of the film. In fact, it felt so nice, I caught myself wishing it would have been the main bit of the film, or a film of its own! Even more so since I felt it was left rather unsolved, even though Neetu Singh´s brief appearance in the very end of the movie gave away the final result.

Love Aaj Kal concludes a very simple fact: Love is Love, no matter if one searches for it or not, no matter where, no matter how it happens, and no matter how modern and cool you consider yourself. You can never bee too cool for Love. It´s just about how thick you are in the head to realize it happened. Very good production values, very likeable actors and very charming story telling make Love Aaj Kal a nice film, if you are in the right mood.
Posted by Gaja Gamini at 22:19