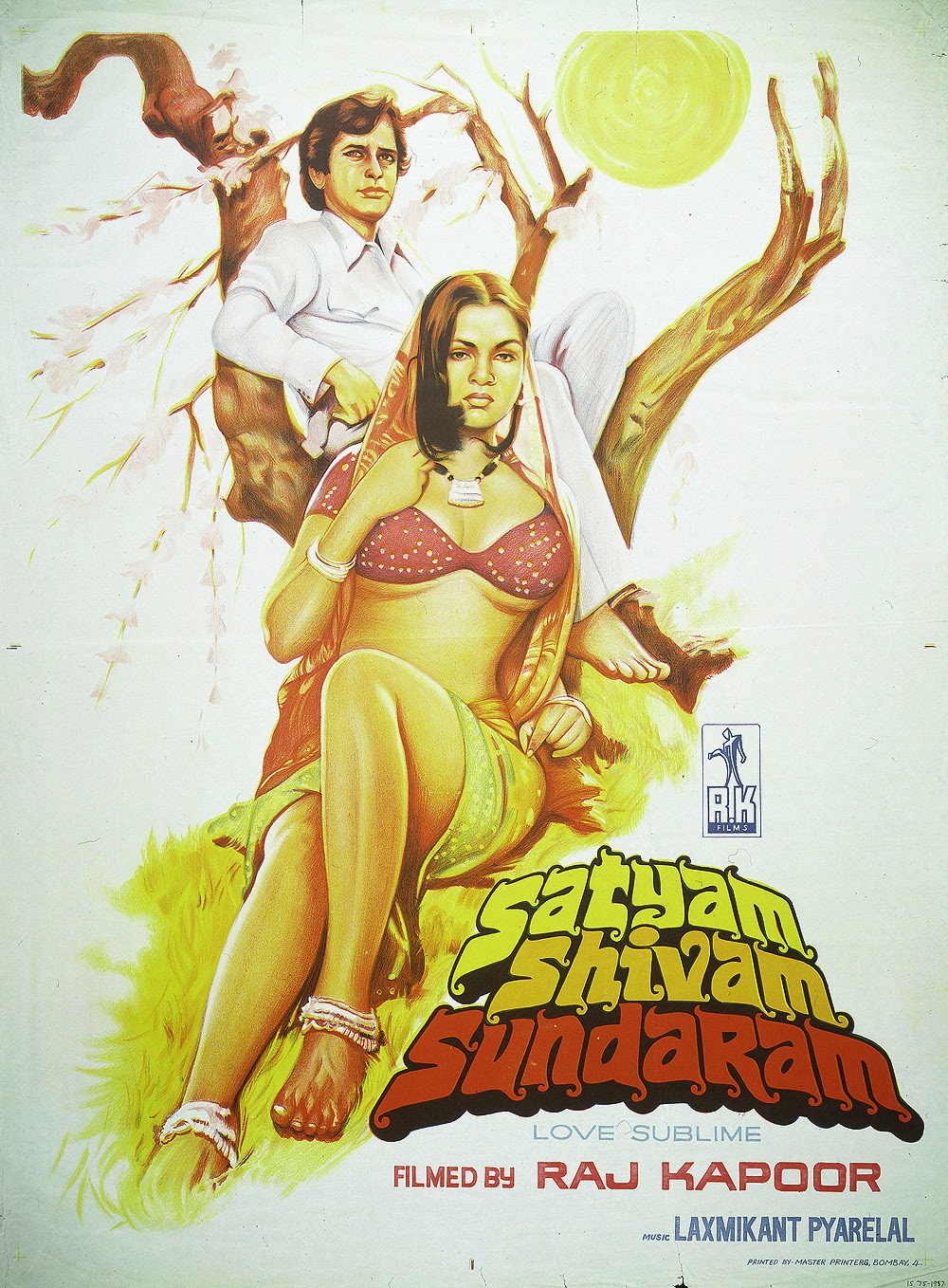 I guess every director has a bad movie or two (or all, righ, Mr. Bazmi?) and Raj Kapoor is no different. Or perhaps Satyam Shivam Sundaram is not „bad“ per se, but the story is just so prepostrous and Shashi Kapoor such an asshole in it, that I cannot help but hate it. And mind you, I am among Raj Kapoor´s most ardent fans. And Shashi Kapoor´s. Which makes it even harder to forgive. 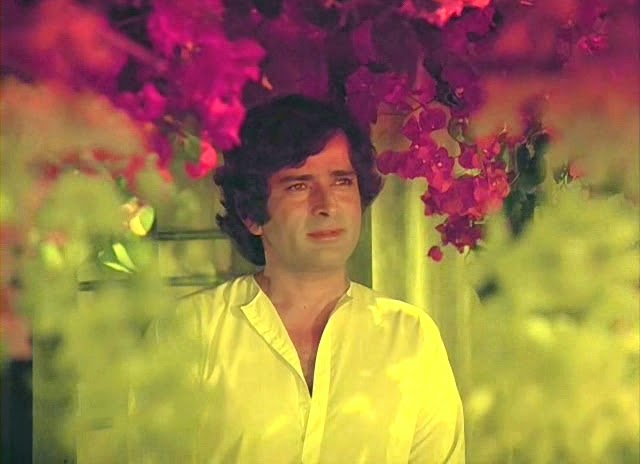 The story is that of a young girl Roopa, whose mother had died while giving birth to her, and who, because of an accident from childhood, has the right part of her face and neck covered in ugly scars. Considered „cursed“ by one and all in her village, Roopa still remains a good soul with great trust in God. Her love for the Creator is only matched by her love for a handsome young engineer (Shashi), who arrives to the village to supervise building and reparations of a nearby dam. He falls in love with her too. Or rather – her voice. Because that is the problem you see: he has never seen her face, which she carefully hides whenever they meet. And she is all too careful never to show herself to him, since he cannot tolerate any ugliness. He doesn´t dislike it, neither he is „not comfortable“ with it – he cannot tolerate it, not even his own reflection in a joking mirror at a fair (seriously, dude?) When a bit later in the film Roopa asks him if he would love her still should she not be beautiful, he completely avoids answering by stating some shit about „not possible you have to be sundar cause you sing so well.“ 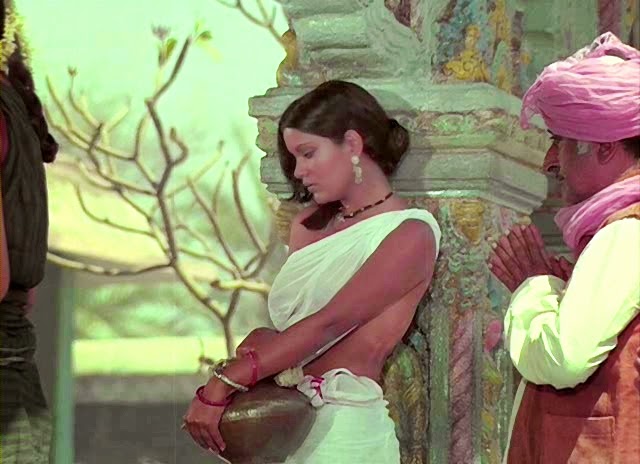 Ultimately he marries Roopa, and only after marriages sees her face. He is horrified and convinced she is not his beloved. And so poor Roopa chooses to serve his selfishness and in disguise keeps meeting him outside their home, instilling the twisted belief there are two women instead of one even further. (yeah, that would totally work in her favour. Geez girl, have some self-respect!) The whole thing with a covered face may have worked a lot better if it actually remained covered throughout. However the character of Shashi sees almost all of Roopa´s face, more than once, and so his argument about „I´ve never seen it“ makes no sense at all. Further more he never questions the girl as to why won´t she show herself to him. And finally, in the end he recognizes her by her voice. And me, already fed up with all the nonsense and Shashi´s asshole ways, couldn´t understand for the life of me why she just didn´t sing to him an hour ago, which would have saved her loads of humiliation and me thousands of brain cells.

It is, indeed, the story which makes the whole film an unpleasant experience. One cannot protest about the production values, because they are (for the time the film was made in) excellent. From colour play of the early morning in the temple to a bit psychadelic fantasy song, the camera presents everything beautifully. The music is actually a highlight, and till now I have goosebumps listening to Lata Mangeshkar´s voice in the title song. 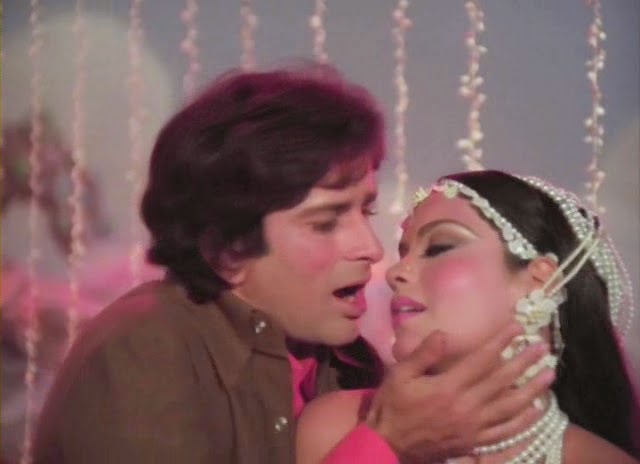 Performances are fairly good (aside from Zeenat´s emotional scenes which reveal her limitations as an actress), unfortunatelly 90% of the characters are unlikeable. I have never imagined it was possible for me to dislike Shashi Kapoor in any avatar, but his own brother made it possible. To see little Padmini Kolhapure in Roopa´s chidhood avatar was a sweet surprise for me and she did very well, especially considering how awful most of Hindi cinema child artists are. Semi-nudity in Raj Kapoor films somehow never bothered me (be it Simi Garewal´s butt in Mera Naam Joker, Mandakini´s breasts in Ram Teri Ganga Maili or Roopa´s overal semi-nudeness in this), even though I realize what effect it must have had on certain parts of the audience. I suppose that what makes the marginal difference lies in how the people on screen react to Roopa. She chooses to wear the clothes she wants, and others around her are unconcerned. They would have treated her the same (awfully or well) had she been fully covered from head to toe. Roopa is also obviously at peace with her body, so why should I be concerned? It is not like she is selling herself at the market. She bathes. She changes clothes. She walks the fields under a blazing sun. Now, if people off-screen see her only as a titillating sexual objects because of the clothes (or rather lack of it), it is above all because they have a filthy mind.

Satyam Shivam Sundaram is definitely, so far, the weakest Raj Kapoor film I have seen. 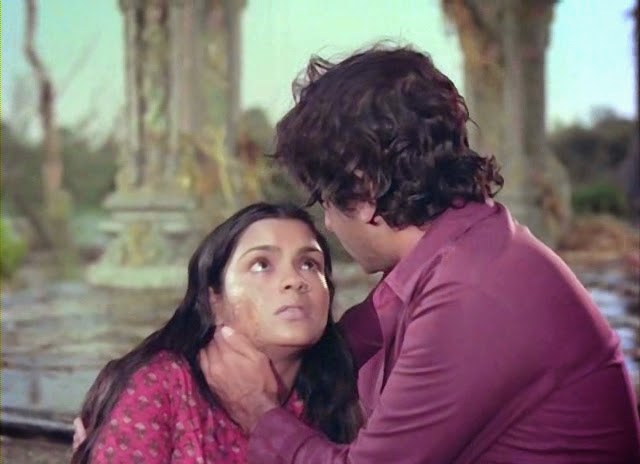