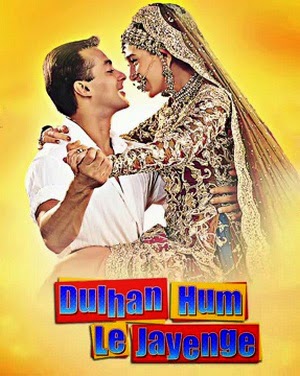 Often my readers accuse me of not being able to appreciate films which are meant to be „just fun“, films that are purposefully mindless, silly and unrealistic. They say I cannot enjoy anything that is not meaningful. And so I sat down and tried to think of a movie that was all that and I would have liked it. I did not have to think for long. A line up of such films exists and Dulhan Hum Le Jayenge (which at first confused me because the title was just too similar to Dilwale Dulhania Le Jayenge) is one of them. Coming out of David Dhawan´s workshop, it ranks among his better efforts, before he went into a long and fruitless period before being somehow revived by his (so far) latest outing of Main Tera Hero.

It is a story of Sapna (Karishma Kapoor), white-clad, long-haired, blue-eyed virginal niece of three rather eccentric uncles, who all make her their personal crusade by forcingly trying to shape her according to their own lifestyle. Thus the strong, wrestling sportsman tortures her with rigorous exercise, pious devotee insists on her spiritual development and the forever young disco lover just wants her to be a modern vixen. Naturally the poor girl wants nothing but to be herself, and so one day she secretly joins a group of tourists traveling to Switzerland. Among the travelers is also Raja (Salman Khan), already determined to make Sapna the Queen of his heart. But conquering her is the least of his troubles, since ultimately he will have to impress the uncles. All of them.

Now, you really cannot look for „meaning“ and „depth“ in this one, can you? But you can enjoy it immensely and I did. Perhaps because even the over the top performances seemed earnest, perhaps because it was cute and fluffy and funny without need to use profanities or lewd sex jokes. Maybe it was Johnny Lever dancing. Maybe I was simply in the right mood. Dulhan Hum Le Jayenge serves you comedy laced with youthful enthusiasm of the main leads and great combination of great supporting actors, and there are some hilariously choreographed (but back then highly cool) catchy songs (complete with puzzled foreign onlookers). Not all films that may claim to have the same hold my love, and I suppose many times I just go by instinct (and my, am I picky!). Some films just do not feel nice. This one does.

Unlike the horrendous Biwi No. 1, this film provides greatly for all Salman-Karishma shippers, among whom I count myself. They are one of the grossly underrated jodis. Neither of them is a stupendous actor, but they bring out the crazy best out of each other. They seem very well suited and there is cheekiness to them both which beautifully underlines their chemistry.

As usual my feminist side was not entirely happy with the movie, since there is lots and lots of men deciding for the girl in this film. Even the happy ending is ensured only thanks to Sapna´s grandfather. At few points it actually gets regressive (talking here about two scenes especially: when Sapna is immediately sexually attacked while thumbing a lift, and when Raja hits her when she is dancing with two horny men. Given both things were stupid of her, the whole thing played it on stereotype that INDIAN girls do not behave „like that“). Well, at least nobody makes a big deal out of Sapna´s change of image from baggy clothes and pigtails to sexy mini-skirts and fashionable hairdo.

So there you have it. That „pure fun“ film I like. Go and watch it. It might just be the right thing to brighten your afternoon.