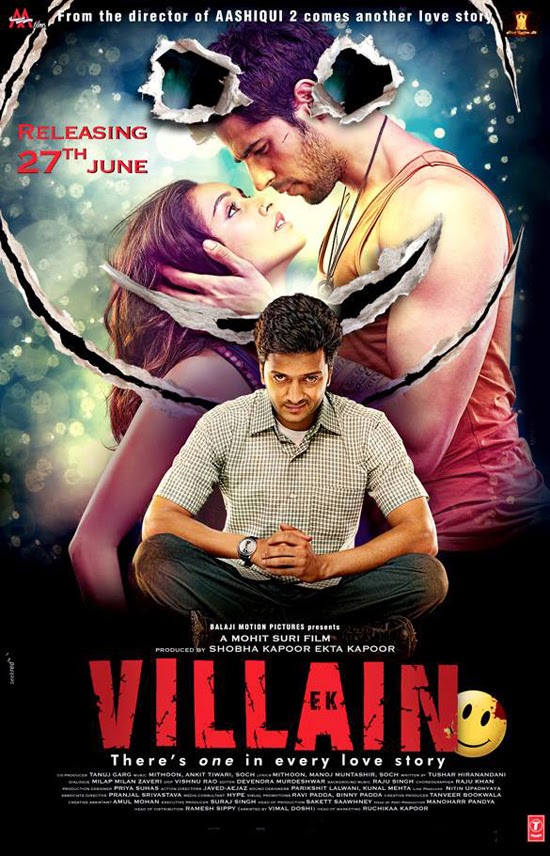 Unlike others I was not smitten with Mohit Suri´s “Aashiqui 2”, mostly because the lead characters were dumbasses. And while the level of dumbassness is not reached, Ek Villain still makes you raise your eyebrows quite a few times. (Unofficial) remake of a Korean movie I Saw the Devil (which Mohit Suri with a “How to Bollywood” handbook in hand switfly denied), that has received much praise from all sides, either did not stay true to the original, or the original itself needed an improvement on logic. Still, there was something about the story, which in spite of all, made it work.

The premise is rather simple: once upon a time a cold-blooded murderer himself, Guru fell in love and married the spunky Aisha and they were happy. But then Aisha is brutally murdered and Guru sets his mind on revenge. But who is the killer? Why did he do it? Was it a contract, a vengeance from the past? Or was Aisha simply on the wrong place in the wrong time that day? There is no mystery at all to the film, which took me by surprise as I had expected lots of twists and turns, while in fact everything is neatly lined up from the very beginning. The responsibility of a task to engage the viewer thus lies with the storytelling, which is done by numerous use of flashbacks. The screentime is quite evenly distributed among “then” and “now”, but it is never difficult to understand in which time period we are at a given moment.

The problematic bits of the film are the ones that make little to no sense. For example why in the world would a girl want to hire a man she knows nothing about (and who makes quite clear he is a ruthless killer) for one of her funny plots (why does she need to hire anyone for that matter since there seems to be no job actually)? Why does the police not arrest a man who they know is a murderer, and instead let him kill innocent women (WTF)? Why is not the police officer who risks the lives of civilians to pursue a stupid personal agenda still employed? What in the world is Aisha´s illness and how the heck does she get completely healthy after the doctors have given up on her?I could go on and on.

The reason why I liked the film in spite of all the stuff mentioned right above, is because it manages to set the mood well. Unlike most of Bollywood horrors, Ek Villain has considerable unsettling quotient, perhaps because the murderer kills with terrifying ease and clarity. The explanation for his behaviour is simple and effective. Riteish Deshmukh shines in this role like never before. His usually twinkling eyes and dorky cuteness made way to a dead gaze and expression which strangely mixes frustration and inner turmoil, even pain at times. The film belongs to him.

Siddhart Malhotra is presented in an image quite different from his previous two films, and much like in Hasee Toh Phasee he shows much promise. Sure, his face is so impossibly beautiful that it never bruises even after serious blows to it, neither it manages to be completely in agreement with his voice and situation, but the potential is slowly conquering the walls of inexperience. His character of Guru is not properly developed – a glimpse into his childhood may have been enough, but more of his criminal past should have been shown, the danger he represents more enhanced. After all, this is advertised as “a love story of a villain”, but Guru remains a conventional hero who had been wronged so let´s forgive him every crime he had commited.

Shraddha Kapoor, a girl who is also as beautiful as a summer dream, got on my nerves for good 40 minutes. Why does Bollywood believe that a spunky, free thinking girl always needs to do silly things, talk loud and jump like a monkey all around? As the film progresses Aisha becomes bearable (and she is definitely better than what Shraddha did last year in Aashiqui 2). She is the weakest performance in the movie – even surpassed by Kamaal R. Khan in his (thank God) small role. Then again he plays a complete asshole so I guess he just slipped into his own routine.

Just long enough, moving in parts, silly in others, still more thrilling than majority of Bollywood thrillers, Ek Villain may be a less worthy (and less violent, which is actually a plus) copy of a Korean film, but among the 2014 films it stands reasonably strong.