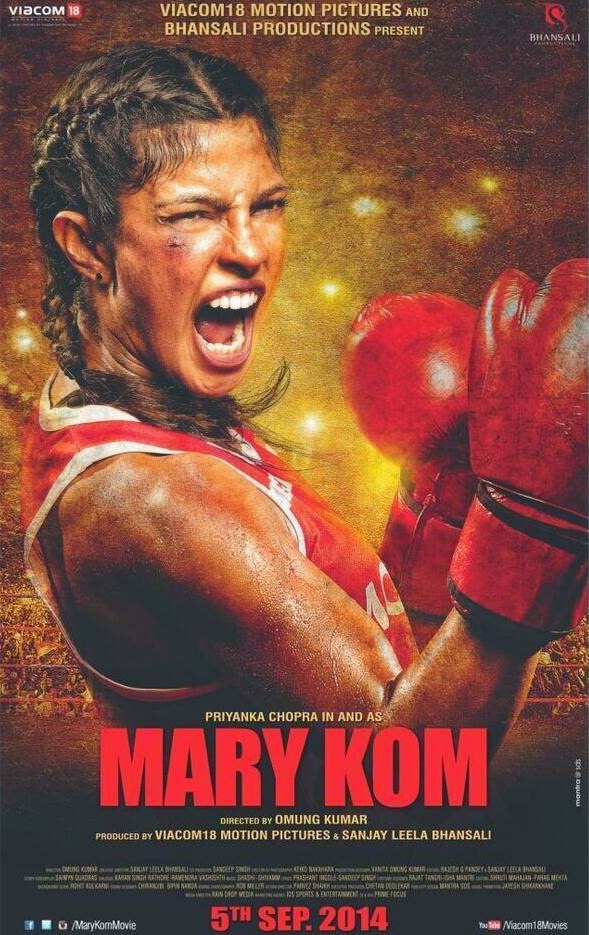 Before I even start with the film itself, I think I need to explain one thing: I hate boxing. I do not consider it a sport of civilized people, for it lacks what I am looking for in a sport event – team spirit or an individual stepping over one´s limits. The sole purpose of box is to simply beat the shit out of the other and you cannot tell me otherwise. That much said I have nothing but respect for Mary Kom as a woman who had to go through struggles which would weary out majority of other people (including me). In that aspect her life story is immensely inspirational and should be told. Just perhaps not the way this particular film does it.

Even without not being intimately familiar with the life of Mary Kom, all its twists and turns, I dare say it was dramatic enough to be an intriguing picture, however the filmmakers felt the need to ad lots and lots of filmi clichés, which they hoped would enhance the major points of the narrative, unfortunately they reach an absolutely opposite effect. They strike out of nowhere and leave one slightly baffled or dubious, they seem too improbable and made-up – basically they do not go with the rest of the film. The most prominent among these are scenes which show Mary in sort of mystical, mental contact with her father and later one of her baby sons, which directly influences her ability to fight. While common in fictional films, I cannot help but wonder if this bit was necessary in a biopic. The songs, too, were not needed and only diluted the story. The “villain” shares the over the top sheer nastiness reminding one of all those negative roles by Prakash Raj, and again, lacks the believable factor.

The film belongs to Priyanka Chopra. It is not her best ever performance and I still think she was a miscast. It was ironic seeing her accusing the match jury of racism, when her casting itself could be called racist. I am not saying I am a great know-it-all on the issue, but I still recall the reasoning of the makers, who stated they knowingly cast Priyanka because a new, Manipuri actress, would not be bankable. What was the intention then? To tell a story of a Manipuri woman who beat every obstacle INCLUDING negative, dismissive attitude so many have against people who look like her, or to make a bankable film? Because they did not manage to have both. I am aware Mary Kom herself was satisfied with the movie, but I do not believe her consent was the best thing to have happened to her community, which so rarely gets the deserved attention and representation in media. This was an opportunity which nobody took. That much said, Priyanka deserves heaps of credit for her incredible dedication. One can see she put her heart and soul into the role, not fearing the physical demands. I suppose much like I respect Mary but disagree with boxing I also respect Priyanka but disagree with her being the protagonist. I salute their work and dedication – and success.

Looking back the at “big” biopic of the last year, Bhaag Milkha Bhaag, Mary Kom fails to leave a mark. Where Bhaag Milkha managed to deal with the athlete´s haunted conscience, his inner struggle and issues, while at the same time being a good sports film, Mary Kom is a good sports-film, but the backstory is really just... a backstory. Why did Mary picked up that glove in the beginning? Why did she love box but disliked athletics? How did she feel when she started a family? We do get to see most of what happened, but hardly any of the scenes really touches the inner conflicts which must have plagued Mary once. And since the main protagonist is left without more complex feelings (as a film character, I am not saying the REAL Mary Kom does not have complex feelings!), you cannot expect more from other characters either. In case of Onler, Mary Kom´s husband, that made me almost sad. (if he is in real life the half man he was shown to be on screen, he is everything a woman could ever want!).

Mary Kom the film is not as magnificent as its subject, but it could be treated as a good way of getting some really basic knowledge on her. Decent, but less than what it could have been and deserved to have become.
Posted by Gaja Gamini at 14:12