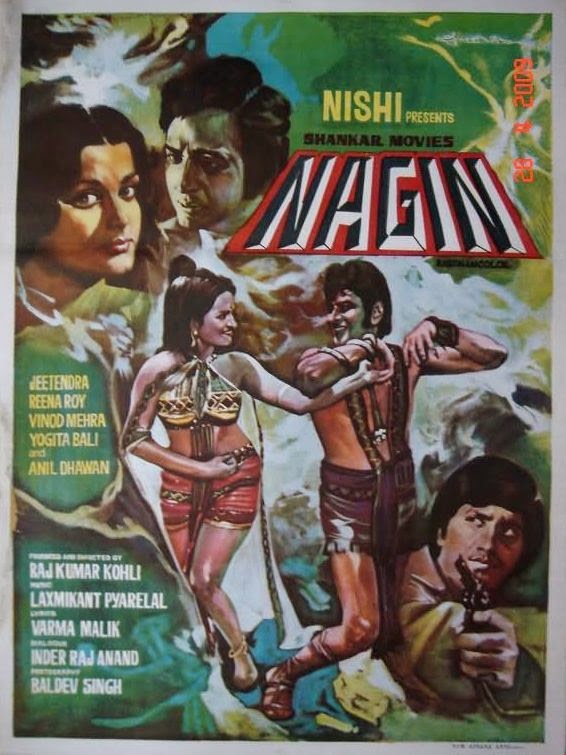 A massive star cast of the kind one does not see too often today and yet a film so laughably bad! Nagin is one of many Indian movies drawing inspiration from the ancient belief in existence of magical snakes, which are capable of taking a human form. Unintentionally it also discovers the endless human stupidity, which makes you facepalm so often you actually hardly see anything of the film unless you rewind. Most importantly, however, the picture suffers from a common Bollywood illness: it is a thriller/horror that is neither thrilling nor scary.
After shooting an obviously stuffed bird Sunil Dutt with horrible hairdo and wearing bell-shaped, skin-tight trousers meets a magical snake in human form Jeetendra. Happy to be alive the snake invites Sunil to watch his copulation dance with a female snake Reena Roy (I guess snakes do not dig private nad btw yes, my subtitles kept translating "suhaag raat" as "copulation night"), and Sunil, being all into it, soon after invites his friends to come and watch as well. However since they do not think he is serious, they come and secretly ogle at a barely-clad girl dancing in the woods – until a snake appears and they shoot it, thinking it was attacking the gal. As it turns out, though, it was the previously saved Jeetendra, all ready for some copulation, and now as dead as a fish. Enraged, the female snake – nagin – sets on a revenge trip. 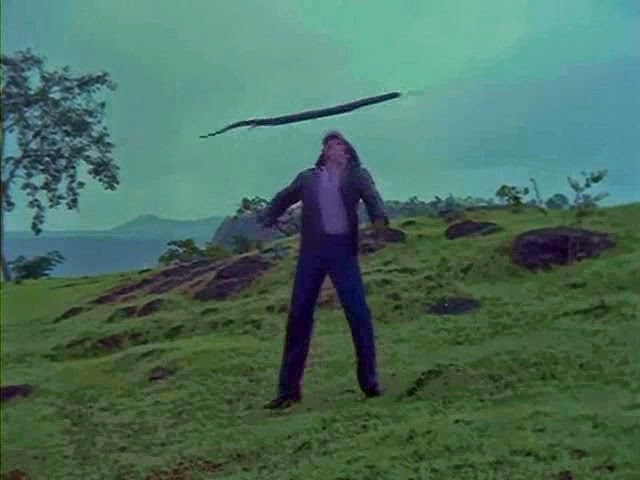 Even with the questionable special effects and questionable performances this could have been a good horror, but unfortunately it gets quickly boring a repetitive. The nagin has just one cheap trick up her sleeve – taking a form of girlfriends and then killing her victims – and she uses it every single time. Luckily for her the guys would still only have half a brain if they put all of their brains together, so they fall for it easily, however, for the audience this revenge tale gets stale all too quickly. Maybe the director recognized this as well, and that is why he included a pretty physical and violent fight between Reena Roy and Rekha near the end (over a man, naturally).

Nagin is one of the films that are both roll-eyes worthy, boring and unintentionally hilarious. It suffers from choppy editing, flying snakes, random stupid comedy and prepostrous characters. It is fun to watch actors, that had proved themselves with better cinema, being a part of such trash – and at the same time it is cringeworthy and painful (almost as much as the copulation love dance between Reena and Jeetendra dressed in gold and leather, which they kept bursting into every five minutes). There is the old Bollywood habit to create drama in situations that call for anything but that, and then the drama intensifies to dimensions nearly unimaginable. Naturally there is a high level of WTF: a scene where Feroz Khan shoots at Mumtaz, wounding her – yet then he says „sorry, I thought you were a snake, let me bandage that“ and she just smiles and accepts such bullshit explanation as a part of their budding romance, is just one of many such scenes.

It was interesting for me to watch Kabir Bedi – this was my first Bollywood film I´ve seen him in, but I have been familiar with him since many years. In my part of the world he is terribly famous for his role of Sandokan. Not long ago he was being interviewed for the Czech TV, and I wanted to be angry with him for saying he preferred doing small role in America to film in Bollywood. Well, if all his films were like this one, I think I might just forgive him.