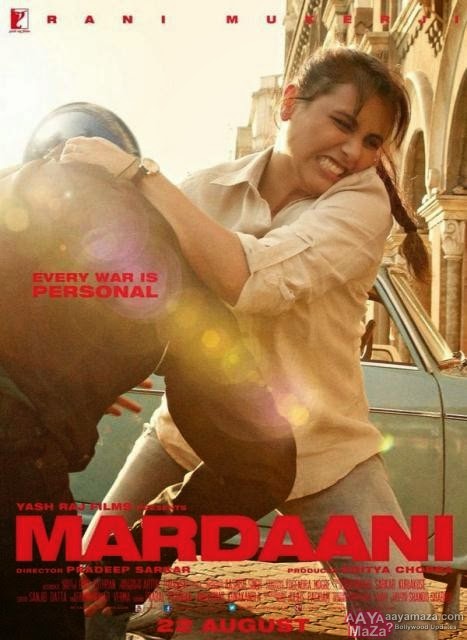 After thinking for a long while, I believe that one word which describes Mardaani in my book would be „believable“. Not slick, not bloody genius mystery investigation. There is nothing loud or theatrical, there is no misplaced patriotism to emotionally blackmail you. I am not saying it is completely logical (though I personally cannot think of anything I would question much), but yes, it is veiled in an atmosphere of near plausibility and the setting, the costume, the acting, everything seems familiar, real … simply believable.

The topic the movie chooses to cover – child trafficking and sexual exploitation - is highly disgusting. We are used to see our hero cops sort out the corruption, drug dealers and murderers, but „white meat“ dealing, possibly the worst of all the crimes imaginable, is usually silently avoided. Perhaps to spare the feelings of the audience? Mardaani does not spare us – thankfully. Some of the scenes are uneasy to watch (for example ripping the clothes off the girls, forcing them to pose naked, and then there is the hazy, yet still puke-worthy rape scene), but to give credit while showing some truly ugly stuff it does not dwell on the suffering of the victims, not making THAT into a spectacle.

The center of everything is Rani Mukherjee as a capable police officer, whose abilities nobody doubts, and who is definitely dangerous and strict, but also shown as caring wife and doting aunt. Shivani Shivaji Roy, as she is called in the film, is one of the truly well written characters, and a strong not because she can take on the villain and leave him a crying, bleeding mess at mercy of his victims, but because she is layered and non-formulatic. She feels real, and Rani´s solid performance makes her real. There is only one thing which I still am not in love with - I do not like Rani´s voice and how she works with it. In some of the scenes it sounded almost robotic. Everything else though is impressive and in my book Mardaani becomes one of the best efforts on Rani´s side.

The supporting cast manages to be just as believable. Tahir Raj Basin excels as the chief antagonist, sleazy, bit maniac and yet coldly sane, weeping for his father, with no mercy for anyone outside his closest circle. On the other side of the spectrum stands child-actress Priyanka Sharma as one of the kidnapped girls, breaking your heart with her helplessness. The picture is then completed with police officers and Shivani´s husband, all of whom may only have limited screen time, but even in that short space manage to give you an illusion of being real.

Mardaani is a good film, one of the better ones of 2014. And the best "female-action" one for sure. It has good pace and draws attention to an important, over-looked issue. It does feel a bit like high class TV cop show rather than a silver screen thing, and the end seems almost too abrupt and „too happy“, but you know what? After all the gore and pain, killing off any of the innocents may have been really too much to take. I could have done without the bit of hiring two black guys following the „We need someone who looks like drug dealers“ line though.
Posted by Gaja Gamini at 13:33