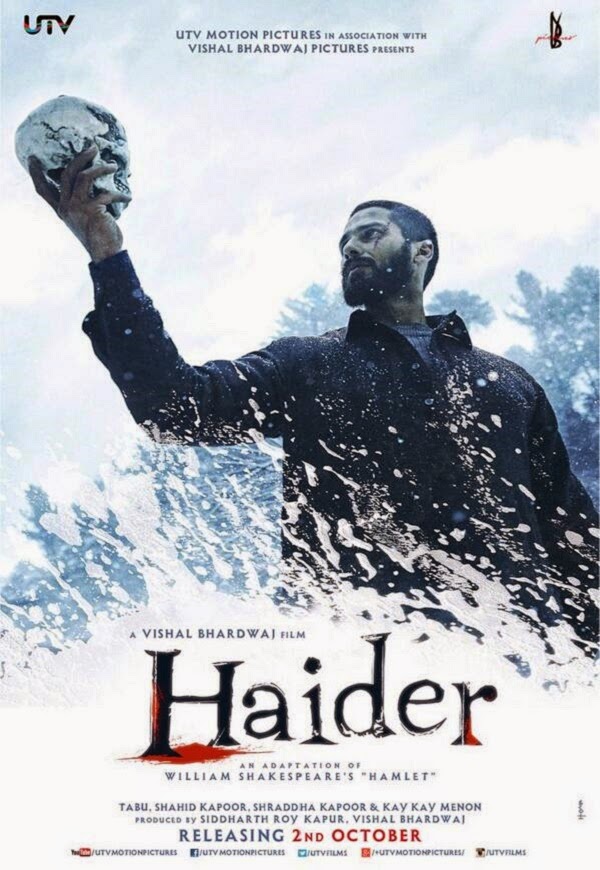 What to say? Everybody loved Haider. Or not? Everybody praised it. Or not? Perhaps there is still hope that others, just like me, ended up confused and uncomfortable as the closing titles rolled and Rekha Bhardwaj sang. Few things which distinctly stuck in my mind were the way pain and innocence on Shahid Kapoor´s handsome face transforming into insanity, the song picturized on the undertakers and then also the pristine, elf-like beauty which seems to radiate from Shraddha Kapoor´s very being. Then I also recall being grossed out at unnecessary gore and blood, and how I hate open endings.

Haider was probably the MOST universally praised movie of 2014, but somehow failed to click with me as a viewer. I am therefore unsure of even how to rate it. On one hand one has to admit this was something very unusual and as such a risk for a prolific Bollywood filmmaker, no matter what his previous track record. It also cannot be denied that the movie is extremely well acted, is well crafted. And finally this is what a good adaptation should look like – taking the essentials, directly referring to the original inspiration through the dialogues and even imagery, but still adding different background, contemporary touch and even its own twist. Oh - the two Salmans and their version of Mere Rang Mein was funny.

Yet for all this I could not bring myself to like the film. It disturbed me, but not moved me. I tried hard to immerse into the world of the characters, but for all my good will I remained a detached viewer. Part of it, at least in the beginning, probably has to do with me not having enough knowledge on the situation in Kashmir during the 90s. I felt it all a bit hazy as the bearded men wielding firearms kept running across the screen. Tabu´s large tragic eyes were completely believable, but for all her sadness I shed not a single tear for Ghazala (and I am a total crybaby. Like seriously, sometimes a simple happy hug on screen can turn me into a sobbing mess). Perhaps the realistic approach went against the film in the end, making it so credible I started longing for at least a bit of the damned escapist cinema. The songs were unnecessary (and quite forgettable), except for the theatrical Bismil, a take on the staged play from the original. Bhardwaj did better job as a composer this very year with Dedh Ishqiya. I also felt the movie was dragging, especially in the first half, and I made more than five breaks meanwhile.

What makes the experience worth it is without a doubt Haider himself – Shahid Kapoor in his best form post Kaminey. He becomes the character, leaving no trace of his stardom anywhere, not even as he dances with extreme energy and grace to „Bismil“. I do not think any other actor could match up to his standard in the scene when we for the first time see him „loosing his mind“, with a noose around his neck. Tabu and Irrfan Khan are both very good, though I perhaps expected something more from the former, given the amount of praise. Me and Tabu still have a long way to go, this being the first film where she actually does some acting. Kay Kay Menon is excellent. Shraddha Kapoor seems bit of a lost baby among others, but does a decent job, even though her character is only needed as a source of plot triggers (which do not even concern her).

I suppose that when asked, I am going to say that Haider is a good film. Just not really what I would watch repeatedly. Among Vishal Bhardwaj films I very much prefer his other Shakespearean venture in the form of Omkara, and at the cost of comitting a sacrilege, I would even give more points to his (often condemned) 7 Khoon Maaf.
Posted by Gaja Gamini at 21:38