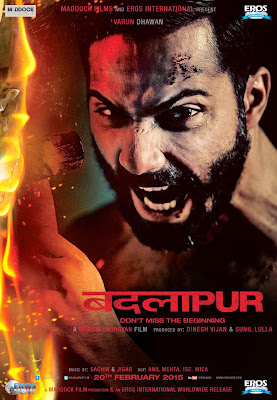 A bloody revenge movie is a tricky thing. You need a lot of strong points. Reason for revenge. Believable acting. Arevenge which leaves you with a feeling of gratification or at least understanding for the hero. And most importantly a sense of compassion for the avenger. Not all real-life situations, during which a man (or a woman) takes law and revenge into their own hands are like that, but in the film world should, at least in my view. Badlapur does have believable acting, it has a powerful trigger to start off, unfortunately the compassion is missing entirely.

Varun Dhawan shakes off the cute image he has had by embracing a character much darker than Aamir Khan from Ghajini or Shahid Kapoor from Haider. Starting off as a tragedy-stricken young man he turns into an avatar which is more repulsive and awful than the villains who took the life of his family in the first place. Acting-wise he nearly pulls it off. As a character Raghu is possibly the worst lead protagonist I can think of. Repeatedly raping a completely innocent woman, threatening another one with the same, only to murder her in cold blood and most horrifying manner cannot be excused or put down to any inner pain or turmoil. Not even the popular "eye for an eye" theory fits, since the lovely Yami Gautam and her child were killed pretty much by unwanted accident. One has to wonder what kind of person Raghu is, if he is capable of such things as rape and abuse of trust. No matter how loveable he seems to be in the flashbacks, Raghu remains terrifying and disgusting. Perhaps more character development could have done the trick and show his personality alternate, but instead the makers decided to simply jump ahead 15 years (during which nobody but Nawazuddin Sidiqui seems to have aged). Furthermore the movie ends on a very anti-climactic note, with no justice served to anyone at all, not even greedy bribe-mongering police officer.

Performances on the whole are all good, but none outstanding. I cannot help but to compare Badlapur with last year´s Ek Villain, which starred Varun´s debut co-star Siddhart the Visually-perfect. While Siddhart has shown less ease in his acting, Shraddha Kapoor was not as half as natural as Yami and the film lacked logic, it still managed to make me cry and feel for the characters. Badlapur made me sick. No wonder, when the rape-victim announces to the her rapist and a murderer that of all the people involved in this messy story he is the one who has been given the second chance.

In conclusion from technical point of view there is nothing too wrong with the film, except perhaps the way the script looses pace and becomes boring as soon as, ironically, Raghu finally confronts his wife´s killer outside the jail walls. Some ends feel loose. Perhaps more soulful and more strategically used music (again like in Ek Villain) could have done make things better. For all its worth though I cannot recommend watching Badlapur to anyone. Not to people like me for all the reasons stated above. Not to lovers of thrillers because there is not enough thrill to justify other things. Not to fans of psychological movies because no development is shown in anyone.
Posted by Gaja Gamini at 22:29