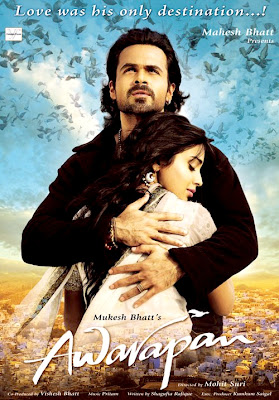 Awarapan suffered what I call „the fate of Lagaan“. I have not come across a single person who wouldn´t be praising it, and naturally the expectations shot skyhigh, never to be met. In the end I just had to admit that I would have liked Awarapan much more had I had not any preconcieved notion about it as well. It is a good film from all angles, but it lacks the "smashing" quality that would make it truly memorable.

Emraan Hashmi, whom I have an unexplainable dislike for (rooting probably in his resemblance to Anil Kapoor in both appearance and manner), plays Shivam, for whom, according to the posters, „Love was his only destination“. To get to the destination he chose a rather strange path though. We meet him as a right hand to a Hong Kong based gangster Malik, doing mostly the ugly and dirty work for him. Thus when he receives an order to spy on Malik´s mistress Reema, who apparently hasn´t shown a proper excitement while having sex with her lover and thus raising doubt about her own fidelity, he doesn´t question it, nor is he apprehensive to carry out her murder in case she would indeed prove to be unfaithful to his boss.
And she does! Apparently she is in love with a poor but handsome young man and wants nothing but to run away and return to India, from where she had been kidnapped and subsequently made to please Malik. Shivam points a gun to her head – and yet the ruthless gangster cannot press the trigger. You see, in Reema Shivam has recognized something he had been trying to forget and we see he is in fact a pitiful heart-broken atheist who once upon a time was in love with gorgeous and deeply religious Muslim girl Aliyah (Shriya Saran, who is apparently stuck with cameos and lame roles opposite unsalelable actors when it comes to Bollywood and is HURTS, oh it hurts). However the deeply in love Shivam lost his deeply religious Aliyah when her deeply offended father shot his daughter by mistake (of course he had been aiming at Shivam), and this loss marked Shivam forever.
He pretty much gives his blessing to Reema and her lover and helps them to escape, which of course is not all that easy since Malik comes to know about it. The last 40 or so minutes are action packed and together with lots of shooting and cursing we get to see Shivam finally accepting God, whom he had never believed in before. Religious movies are rather tricky. They can easily offend everybody and tend to be preachy, Awarapan manages not to. Aliyah is a Muslim, and yet Shivam finds God in a Buddhist temple, indicating that God is one for everybody, no matter of what you call yourself – and that is one theme I shall always love and be grateful for it.

Emraan was good as long as his burnt out mode fitted the story, but once he sets out on his last quest, I would have expected him to actually show some emotion. All were scared of him in the film but there was nothing scary about him. He looked mostly confused and his stone face was not really appropriate to lot of situations. A hero with more of visible emotional range would have done wonders for the film. As I have indicated above, I was also left wanting more of Shriya, who only had an extended cameo in the film, although her character was essential to the story. I would love to see her in „big“ film with „big“ heroes, with her amount of talent and beauty she could easily overrule many wanna-be starlets that Bollywood is currently full of.