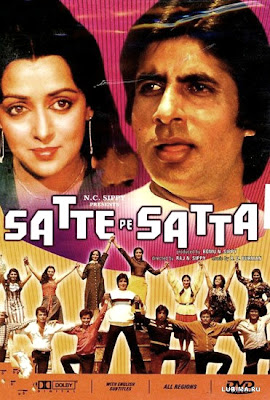 I first learned about the existence of Satte Pe Satta last year when a new remake of it was announced and at the time I was anything but happy about it, but quite a lot has changed since then and now I´m awaiting the film with optimism. The 1982 film starring a popular couple Amitabh-Hema was originally also a remake – of American film „Seven Brides for Seven Brothers“, and though a pleasant film, there was a lot left to be desired, which the new version may eventually draw its strength from. But before the first take of the new movie (that is going to have Sanjay Dutt and Karishma Kapoor in the lead roles) is even taken, let´s have a closer look at the classic.

Somewhere in India there is a solitary farm run by seven brothers, who definitely do not lack love for each other, but do lack basic human manners. They are dirty, unshaven, lazy, uneducated, simple..... and do not care. If not for the eldest brother Ravi (Amitabh Bachchan), who at least lacks the laziness if not other of the trades mentioned, and acts a bit like a slave driver to his siblings, else they would probably just rot on their unkempt cots. One day Ravi by a rather embarrassing mistake meets Indu (Hema Malini), a neat and clean hospital nurse, intelligent, strong willed, basically everything other people in his life (read his family) are not. He falls for her, but doesn´t leave a favourable impression on her and it takes quite a lot of courting and convincing before Indu too finds some love for him in her heart. That however without any knowledge about his family situation.

Indu is quite shocked by her six brothers-in-law, and no wonder considering one of them is Shakti Kapoor and they move about in next to nothing but some brightly colourful underwear. In the end however it´s them who get the bigger shock, when she decides to „civilize“ them.... Hema Malini is someone I am usually a bit wary about on screen, thought it´s true I´ve not seen that many of her films as yet, and I liked her as feisty Indu, except her dialogue delivery is not the best and her voice modulation neither. She is a good match for Amitabh (who is of course great) and Indu is really that one phenomenon which keeps the basic plot tight and entertaining. Her quest to make her brothers-in-law normal people who dress and wash and don´t eat with their hands was hilarious. However as the movie goes on the focus shifts to the six brothers and their little romances as well as some rather unnecessary masala plot involving an Amitabh´s duplicate and money plotting, Indu makes a quiet exit and so does most of the humour.

I understand that Satte Pe Satta is one of most favourite Amitabh Bachchan movies, and no wonder, it definitely provides entertainment (by which I do not mean to say the film is brainless - „entertaining“ has become rather synonymous with „stupid“ in the past few years I feel) and delivers on most levels, yet it is definitely not a perfect film. The second half is weaker and at times on the verge of boring, resembling way too much the 80s action films that were pretty much all the same as if they have been printed by a copy machine. And somehow I don´t think I would believe that a guy, who threatened me with a knife, was only trying to help me. In the end all the brothers turn from animals to humans and all are rewarded with a nice girl to marry. The idylic family life on the farm can continue.