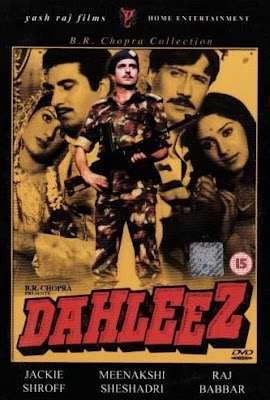 A fine film about first loves not meant to be and how it´s difficult to realize a marriage can be full of love unspoken. Triangular love stories were, are and always will be in demand and Dahleez follows the suit, with the difference that the loser in this is not forced to die a valiant death and there is nobody fourth found to pacify him.

Meenakshi Sheshadri, who remains unjustly and painfully forgotten by 90% of Bollywood viewers today, is Naini, a beautiful girl catching an eye of Shekar and another of her friends (Jackie Shroff and Dalip Tahil being rather ridiculous trying to pass off as students) and ultimately choosing Shekar. Few songs later the two depart and plan to meet, but due to unexpected issue Shekar cannot make it. He unwisely sends his friend to explain this to Naini, but instead she is told by this rejected and jealous suitor Shekar is not interested in her anymore. Without examining the matter Naini feels insulted and retreats from Shekar´s life completely, leaving him confused and heartbroken.

The two meet few years later by an accident while skying in Kashmir, but before anything can be said Naini runs away and Shekar is left with his questions and unrequired love again. We are shown he became an army officer, who occasionally pours his heart out in songs he sings on TV (indeed), unknowingly wretching the heart of poor Naini who is made to listen to him – by her music loving and nothing suspecting husband Rahul (Raj Babbar). Indeed, the girl got hurt once, never sought any explanation from the guy she loved and got married, pretty much to show him she can do without him. But Shekar is not one of those who give up easily. Once he and Naini are forced to sing a weepy love song on TV together (ah the awkwardness of the „accidents“!) and her army husband leaves to train troops against terrorists (which requires his celibate apparently), Naini and Shekar start seeing each other again, him still in love and her not completely over him either....
Beautiful Meenakshi and young, fit and sexy Raj Babbar were both excellent, Jackie (also young , fit and sexy) however had a rather ungrateful role of a showpiece for most of the movie. Some side characters deserved better treatment – namely Smita Patil, who appears for just a few minutes only to kill and to die in a fit of patriotic fervor. The action and emotional drama was not really well combined, especially by the end the action bits completely took over for the sake of some „dishum dishum“ without which any 80s film just couldn´t exist, plus it was needed for us to understand that Naini has to choose between two really patriotic and righteous and brave and macho men – with them saving each others life without having a clue they both love the same woman (long live the awkward!).

The 80s hold the greatest number of films that are just bad when it comes to Bollywood and it is not completely unjustified to label them the „dark times“ of Hindi film industry, yet Dahleez is one of those movies that could work very well had it not been for over-grown students (Jackie and Dalip at the beggining), some crappy dialogues, not quite engaging action sequences and not good enough development of Shekar´s character. It still has things to offer – like some melodious songs (though none gives us the chance to see Meenakshi´s unquestionable dancing genius), solid performance by Meenakshi Sheshadri and Raj Babbar at his watchable best.
Posted by Gaja Gamini at 13:56