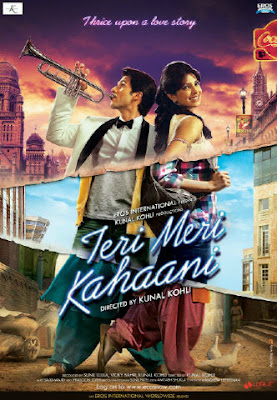 I was expecting a fluffy and cute film but it turned out to be quite lame. Surprisingly enough it was not about reincarnation, which was the impression I got from the promos, but perhaps that would have made more sense in the end.

One by one, and for whatever reason not chronologically, we are presented three love stories that have one thing in common – they happen in a span of mere minutes. First it´s the Mumbai of the 60s, where in a big film studio an aspiring musician falls for a film star (whom he doesn´t know, even though he seeks job in films and she gets her own Filmfare cover from time to time. Huh.) However at the same time he acts way too familiar with a common girl who thinks he´s in love with her. And boom – she happens to be the filmstar´s best friend. This storyline, though weak in terms of script (and everything else), was watchable. Priyanka (looking gorgeous, no arguments there) had nothing much to do in a whole film, but Shahid as Govind, though unsuccessfully trying to recreate the Raj Kapoor magic, was more or less agreeable both as a character and as a performer at this point (it gets worse later). The sets creating scenery were too obviously painted to be taken seriously – or was that intentional to bring out the vibe of the era?

Second story moves forward in time to our present where Facebook and Twitter are a part of everyday life. A young college student breaks up with his girl, but two hours later falls in love with another. After much SMS messages they are full of true pyaar, which includes sending each other photos of their burgers etc etc, but the ex-girlfriend (who by the way initiated the break-up) decides she is jealous and makes public some unflattering pictures of the guy, to which he answers with posting her pictures. His new love doesn´t understand fun apparently and leaves him. Boo hoo. Let´s put a hood on and have some smart talks about how women are like alcohol. This storyline was hand down the worst. Not only neither of them looked the age they pretended to be, but all the messaging actually made them seem like 13 years olds. Especially the whole photo war between Krrish and Meera (WHO keeps photos like that in their phone anyway???). Super lame.

I was rather looking forward to the 1910s (oh the time when to sing in prison was illegal) bit, but it let me down. Lahore at that time was apparently full of horny girls waiting only for Shahid to rid them of their virginity. I am no expert on Indian culture, but from what I´ve seen and heard, looting a girl like that often leads to the guy being beaten up and worse, yet this guy is ruining every girl in sight and he walks freely in the city, without any father being distressed. And of course the girl who gets his heart is the one who doesn´t let him into her bed as soon as she sees him. Pure pyaar yet again. But alas her father is not inclined to marry his daughter off to a notorious womanizer who recently is in prison, and instead he weds her to a decent man he approves of. Bastard, nah? The „mass crowd“ scenes in this were anything but a „mass crowd“. It got better as it progressed, but the first impression really took its toll.

But if you have not understood already, all the stories are about TRUE PYAAR. And what Bollywood taught us? That PURE PYAAR always wins. And so you can be sure that confused filmstars will hop onto that train, that university students acting like prepubescent children will update their Facebook status, and that the director will conveniently and quietly kill off the girl´s decent husband so the womanizer can marry her instead.

Finally the question is – why? I did not understand the need for three different stories, that obviously had no connection between them. Did Kunal Kohli get three similar scripts and couldn´t decide so he rolled them all into one? That seems the most probable version to me.