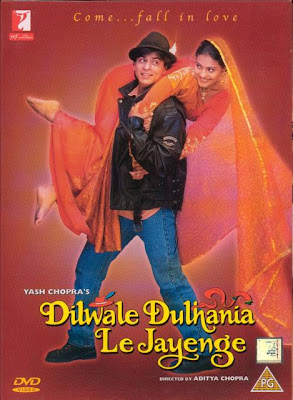 I was deeply disappointed by Dilwale Dulhania Le Jayenge. It is a film you will find in all the „must see“ Bollywood lists, it is massively popular and what is even more amazing it is still running in the theaters. For some it is the best of the best Bollywood movies ever. An evergreen classic. And it did not blow me away at all when I saw it the first time. I still remember how I was sitting in front of the screen as the closing credits rolled, me rather baffled, and I thought to myself: „Was that it?“ I failed to see the greatness there should be to rave about completely. But then after some time I returned to the film. And since then I have done so about four times. And other times I watched just small portions of it. And I realized that the beauty of DDLJ is in its simplicity and repeat value. It does not have the most amazing plot twist and it is all in all quite predictable, it does not have gorgeous sets to take your breath away and editing is a bit sloppy at times, but the film has an unusual freshness to it that can still be felt years after it first released and got so many fans.

The story line is notoriously known so let´s just sum it up quickly: Europe. Raj meets Simran. Simran hates Raj because he saw her bra and actually can play a piano. Raj doesn´t rape Simran even though they spend a night in a closed space together. Simran and Raj fall in love. But oh! Simran´s dad is Amrish Puri which in itself spells trouble. And indeed we are given his famous deadly stare and off goes Simran to India and her arranged fiancé she has never even seen. Raj, fully armed with a mandoline and a cow bell, follows, chupke chupke. Raj convinces everyone, while being in disguise, he is the most perfect guy ever. Amrish Puri deadly stares as he finds out the truth. Raj apologizes for even trying and makes a quick exit. Amrish Puri deadly stares as a train with Raj starts to move forward. They stare at each other. Still staring. Amrish Puri has a sudden change of heart and urges Simran to outrun the train and hop on. Simran runs. Running. Dramatic music in the background. Simran catches Raj´s hand and he pulls her into the train.

One of the most famous Bollywood endings has actually many shortcomings. Why doesn´t the train actually move at the speed it should. Why doesn´t Simran hop into the nearest door and instead needs to outrun several carriages. Why the hell doesn´t Raj actually step out of the train? But as I´ve said before, DDLJ is not a perfect, flawless film. It has loads of fluffy charm to make up for it. Not even the performances are award-worthy (though numerously awarded), but there is so much earnestness in young Shahrukh Khan and natural appeal in Kajol you believe them without a complaint. It is no secret I am no fan of their jodi, as appalling as it sounds to many of you. I think they look like siblings most of the time. DDLJ however presented them so well even I couldn´t rant about my reservations towards the couple. Still, it shall forever be a great sorrow to me that DDLJ could not have been made with the original choice for Simran, the unfortunate Divya Bharti...

People usually rave about the second part of the movie, which almost entirely belongs to Shahrukh Khan as Raj, whilst Kajol as Simran remains largely passive, letting him do what he seems fit - after all that is what he asks her to do. I personally enjoyed the first part with their bonding in Switzerland more, it had more of things actually happening and there was more delightful comedy involved, it was also a lot less tear-heavy. The supporting character actors were dearly loved people whom we have learned to see in every other movie. They all do what we are used to know from them. Amrish Puri being the negative person in the film (but for once not evil), Farida Jalal an understanding and gentle mother, Anupam Kher a slightly whacky dad who interferes with everybody´s bussiness. All were lovely to watch. Though as a person who knows Karan Johar primarily as a TV host and a director of awful films it was kind of bizzare to watch him on screen as one of SRK´s friends...

Great deal in the film´s appeal also lies in an extremely melodious and catchy soundtrack. It involves two pretty much iconic songs Tujhe Dekha To and Mehndi Laga Ki Rakhna, but all the tracks are good.

DDLJ is definitely overrated when labeled as perfect and the best ever film. But it is undeniably an all time classic with a truly tremendous repeat value, and it definitely belongs to all those „must see“ lists, even though if only as a reference point to the modern Bollywood romance it has become alongside two other biggies – Hum Aapke Hain Koun and Dil To Pagal Hai. The big three to bring romance and family values back after all the action packed massalas that ruled the cinemas for years post Sholay. It also remains the best Aditya Chopra work till date. In fact, I don´t think he came even close with any of his other movies. A begginer´s luck perhaps?