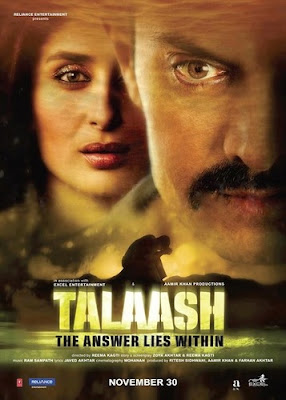 There couldn´t be a better title for this film, because it is indeed primarily a movie about searching, where every character is on a lookout for something else. Ad to it that the full titles is „Talaash – the answer lies within“ - and wah! Rarely you stumble upon a title summing up the movie as perfectly, yet not revealing anything, just capturing attention. And the movie itself proves to be just as captivating. Before I go on, talking about the story and such, better be warned: if you have not seen the movie yet, and actually want to enjoy it, stop right here. I know what I´m talking about. This is one movie, that spoilers not only „spoil“, but extremely take away from an impact that the movie has a potential to make otherwise. I was, unfortunately, not lucky, and knew beforehand what the twist was. Talaash still made for an engaging and even thrilling watch. But I can just imagine how much more I would be taken by it if it wasn´t for some people who enjoy spoiling fun for everybody else.

In the dead of a night a fast speeding car, just like that and seemingly entirely without reason it takes a sudden turn and crashes into the sea. The driver, a famous actor, drowns. And so police inspector Surjan starts his search – for the reason of the tragedy, because nothing indicates a sabotage neither a suicide. The case doesn´t seem to have a satisfactory explanation, and the more police knows, the more mysterious and tangled it all looks. Surjan spends his days and nights at work. Not only he is driven by desire to solve the thing, but he is also trying to escape his own personal pain. He has lost his 8 years old son in a tragic accident some time ago. His shattered wife is only slowly trying to recollect her life. Her search is for the lost understanding with her husband.

Surjan´s investigation brings him into the red light district of Mumbai, where he meets Rosy, a prostitute, who gives him some truly invaluable information. And more. Her presence seems to calm his nerves. He cannot talk to his wife, but he feels free to do so with Rosy. With her, he can finally rest for a few moments, without nightmares. Even Rosy is in search of something. She is searching – for justice, a revenge for her own death...

Spooky! That Talaash is a ghost film becomes apparent quite some time before Surjan himself realizes the truth behind Rosy, her tales of a lost prostitute three years ago and also a „special place“ she leads him to. Ad to it communicating with dead son through a medium, and you could almost classify the film as a horror. But the supernatural is not really the core of the film, neither is police investigation, nor are small episodes of side characters, who are also searching – pimps for wealth, prostitutes for freedom, and a crippled crook for a decent life of the woman he loves. Ultimately Talaash is a human tragedy and coping with the greatest loss a parent can bear. Whatever Surjan goes through, every person he meets, all that is slowly leading him to forgive himself and breathe freely again in the end. His search is for inner peace.

Talaash is not the best film of the last year, but it could be ranked among top 10. The concept is not entirely new overall, but it is new for Bollywood. It is different and well made. Performances are very good from everybody. There is both subtlety and realism to all of them. The film has three major stars, but none of their auras and personalities overshadows the film, making it a background to their own shine. If anyone around you is in search for a don´t-leave-your-brain-at-home film, Talaash might be what they are looking for.