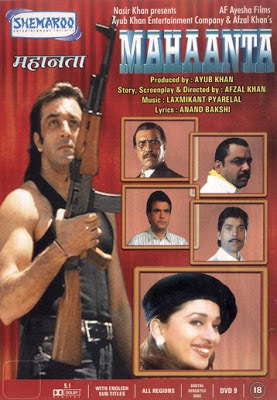 Mahaanta is one of those films I tend to pretend do not exist, because it is one of those films that cause me an acute pain as a Madhuri Dixit fan. In making for almost 9 years, by the time Mahaanta came out it was badly outdated in all aspects. The star-cast, that must have been extremely impressive in the late 80s, when the film shooting actually started, was, by the time it released, almost exclusively considered veteran and non-happening (apart from Sanjay and Madhuri). The story too was one of those bloody thrillers about revenge so popular at the time, but no longer relevant in the post Hum Aapke Hain Koun and Dilwale Dulhania Le Jayenge era. It wasn´t handled well either. 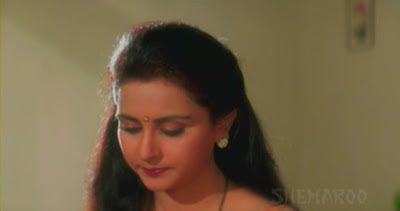 Honestly, I don´t know where to begin. The film is extremely boring from the start, and to be honest I couldn´t really follow what was happening. There was Jeetendra, already looking 60, but playing a young man, I caught a glimpse of the beautiful Poonam Dhillon (and my, does she disappear like a rock in the ocean not to be heard of again in this film!), but mostly the story seemed to focus on devilish Amrish Puri, who runs illegal business and has brave, but stupid police officers murdered. And then, out of nowhere, Sanjay Dutt appear to save the day and Jeetu´s ass (just like that, no explanation given). And in the next moment he´s wearing a tight yellow Speedo T-shirt, buying sarees for his bhabhi in a supermarket, and falling in love with the gorgeous, though horribly dressed Madhuri, as she´s passing around. However, Amrish Puri´s „son“ falls in lust with her (no, that isn´t a typo) and to get her he tries to rape her, and when he gets a beating, asks daddy to get him the gal.

By threats to her and Sanju Amrish forces Madhuri to a wedding, but Sanjay having none of that manages to steal the bride for himself and marry her. And from this point on, the story gets even more boring and confusing, with more kills and more raping, and Jeetendra circling around as a righteous protector of the law while Sanjay turns into an avenging killing machine and having a song after he murders every single one of his enemies (sorts of „Ninety-nine bottles of beer on the wall, Ninety-nine bottles of beer. Take one down, pass it around, Ninety-eight bottles of beer on the wall“ gaana). Until in the end Sanjay and Jeetendra have a Dostana moment of mutual forgiveness and renewed love for each other. Doesn´t you head hurt just reading? Now imagine actually watching all this in span of approximately three hours.

None of the actors gives a really bad performance, but none excels either. Jeetendra is boring, Sanjay´s character actually rather unlikeable, Amrish Puri gives us his standart staring villain and Madhuri doesn´t have a big role, especially in the second half she only appears for the songs - a reminder that she signed the film in the late 80s. Heck, Shakti Kapoor is on the screen more. Music is fine and catchy enough, although picturization of Chule Chule makes Sanjay Dutt look like a blind, deaf and unfeeling wooden log, because to sleep with your own wife would probably take away your super powers or what. Let´s just smack her across the face, that´s right. Just like when she said she loved you. Indeed, Sanju may love Madhuri in the film, but I have no idea why would she love him so dearly, cause treats her like dirt most of the time.


All those years it was in making ruined the film completely. I´m completely sure Sanjay and Madhuri´s story was just a supporting one to the main of Jeetendra and Poonam Dhillon, or at least there was loads more of Jeetendra and Poonam than what we´ve got to see eventually. Scenes were being rewritten and reshot, which we can perfectly document by seeing fresh and happy Sanjay vs. tired and weary Sanjay who just got out of jail, Madhuri with skin problems and black curly hair from the times of Saajan and Madhuri with flawless skin and brown messy hair she sported post 1996, and of course Sanjay´s mullet is ever-changing, not staying the same in two scenes.

Mahaanta is a pain. In the hearts of Madhuri fans like me, in the brains of all the sane movie-watchers, and if you manage to sit through it all at once, it can easily give you a pain in the...